Bishops of the Diocese

David William Bacon was named the first Bishop of the Diocese of Portland and was   consecrated as bishop in St. Patrick’s Cathedral in New York on April 22, 1855. Ordained  to the priesthood in 1838, he worked in the Diocese of Brooklyn until becoming the  Bishop of Portland. When Bishop Bacon arrived in Maine, there were only eight churches in the Diocese of Portland. During his tenure, the first Catholic schools were established in Portland, Bangor and North Whitefield, and the Cathedral of the Immaculate Conception opened in 1869. Bishop Bacon remained bishop until his death on November 5, 1874.

Born on April 6, 1830, James Augustine Healy was appointed on February 12, 1875 and consecrated as the second Bishop of the Diocese of Portland on June 2, 1875. Bishop Healy became the first black bishop ordained in the United States. He was ordained to the priesthood in Paris in 1854 at the Cathedral of Notre Dame. Prior to arriving in Maine, James Augustine Healy was the pastor of St. James Church, the largest Catholic congregation in Boston. Bishop Healy was half-Irish which bonded him with parishioners on Munjoy Hill, many of whom were newly arrived from Ireland. He also spoke fluent French, endearing him to the Acadians of northern Maine. During his 25-year tenure, Bishop Healy founded 33 parishes, 22 schools, 18 convents and a number of hospitals and orphanages. Bishop Healy remained bishop until his death on August 5, 1900. He is buried at Calvary Cemetery, which he helped enlarge. 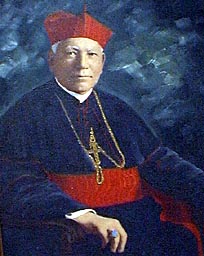 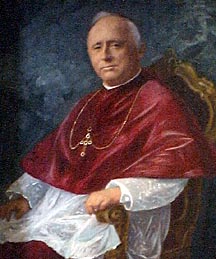 Born on January 22, 1858, Louis Sebastian Walsh was appointed on August 3, 1906 and was consecrated as the fourth Bishop of the Diocese of Portland on October 18, 1906. Bishop Walsh attended seminaries in Canada and France before studying in Rome. He was ordained to the priesthood in1882. Before arriving in Maine, Louis Sebastian Walsh served as Superintendent of Schools for the Archdiocese of Boston. Bishop Walsh’s tenure was marked by a new wave of immigrants from Poland, Italy, Slovakia and Lithuania to Maine. He was a supporter of the National Catholic Welfare Conference and established several new parishes and schools throughout the diocese. An avid historian, Bishop Walsh acquired the site of the French Capuchin mission at Castine, marking the tri-centennial of the founding of Saint Sauveur mission on Mount Desert Island, and started the Maine Catholic Historical Magazine. He remained Bishop of Portland until his death on May 12, 1924. 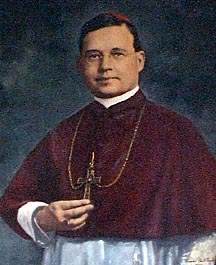 Born on February 26, 1877, John Gregory Murray was appointed on May 29, 1925, and was consecrated as the fifth Bishop of the Diocese of Portland on October 12, 1925.  Bishop Murray attended the University of Louvain in Belgium. He was ordained to the priesthood in 1900. Bishop Murray was the first Auxiliary Bishop of the Diocese of Hartford (1920-1925). During his tenure in Maine, Bishop Murray founded a new diocesan weekly newspaper and oversaw a building boom of parish churches and schools, but faced a precarious financial landscape at the onset of the Great Depression. Bishop Murray organized relief committees to raise money for those in need and was much beloved for his kindness and compassion towards people of all walks of life. In 1931, Bishop Murray was appointed the Archbishop of Saint Paul, Minnesota, where he served until his death on October 11, 1956. 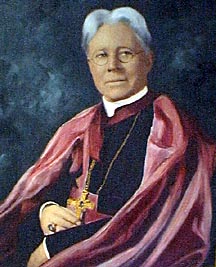 Born on November 14, 1876, Joseph Edward McCarthy was appointed on May 13, 1932 and was consecrated as the sixth Bishop of the Diocese of Portland on August 24, 1932. McCarthy was ordained to the priesthood in 1903. Prior to arriving in Maine, Joseph Edward McCarthy was a language teacher at a seminary in Connecticut. During his tenure as Bishop of Portland, Bishop McCarthy stabilized the financial situation of the Diocese by issuing bonds which liquidated the entire debt by 1963; numerous Catholic elementary schools, high schools and colleges were opened; and Bishop McCarthy’s tenure saw the arrival of the diocese’s first auxiliary bishop, Daniel Joseph Feeney. Bishop McCarthy also guided the diocese through the rigors of World War II. By 1948, the administration of the diocese passed to Feeney due to Bishop McCarthy’s declining health. Bishop McCarthy died on September 8, 1955. 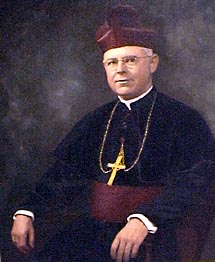 Born on September 12, 1894, Auxiliary Bishop Daniel Joseph Feeney succeeded Bishop McCarthy upon his death and was consecrated as the seventh Bishop of the Diocese of Portland on September 12, 1955 (his 52nd birthday). Bishop Feeney was a native of Portland and graduated from Portland High School in 1912. He also studied at the Grande Seminary of Montreal before being ordained to the priesthood in 1921. From 1921 until his appointment as auxiliary bishop in 1946, Daniel Joseph Feeney held a variety of roles at parishes around Maine and also served as superintendent of diocesan schools. During his tenure as bishop, Bishop Feeney celebrated the centennial of the arrival of the first Bishop of Portland and established the Catholic Youth Organization as well as the predecessor agencies of Catholic Charities Maine. Bishop Feeney attended all four sessions of the Second Vatican Council. Bishop Feeney also opened a number of diocesan buildings during his time as bishop, including the Chancery. In February 1967, Coadjutor Bishop Peter Leo Gerety became apostolic administrator of the diocese due to the failing health of Bishop Feeney, who died on September 15, 1969. 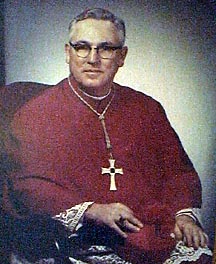 Born on July 19, 1912, Peter Leo Gerety, who had been acting as apostolic administrator of the diocese since February 1967, was named the eighth Bishop of the Diocese of Portland on September 15, 1969. Before being named coadjutor bishop of the Diocese of Portland in 1966, Peter Leo Gerety worked for the U.S. Department of Agriculture prior to starting his studies for the priesthood. He was ordained to the priesthood in 1939 and then served in various capacities at parishes in Connecticut. During his tenure as Bishop of the Diocese of Portland, Bishop Gerety founded a number of new parishes in the suburbs and metropolitan areas; the first diocesan capital campaign was held to construct the Newman Center in Orono; the Diocesan Human Relations Services (DHRS), which was the precursor to Catholic Charities Maine, became a state-wide agency; and the diocese also opened its first units of low-income elderly housing in Portland and in Waterville. Bishop Gerety oversaw the modernization of the Cathedral of the Immaculate Conception and led a campaign to defend the rights of conscientious objectors during the Vietnam War. In 1974, Bishop Gerety was appointed Archbishop of Newark, where he served from 1974 to 1986 before resigning. At the age of 104, Archbishop Gerety was the oldest living Catholic bishop in the United States when he died on September 20, 2016.

Born on August 21, 1920, Edward Cornelius O’Leary was named the ninth Bishop of the Diocese of Portland on October 16, 1974 and was consecrated as bishop on December 18, 1974. He was a native of Bangor and attended a seminary in Ottawa. Bishop O’Leary was ordained to the priesthood in 1946 and was a much appreciated pastor and chancellor, serving at parishes around Maine through his appointment as auxiliary bishop in 1970. During Bishop O’Leary’s tenure, the Church in Maine experienced both an increase in population and a decline in the number of priests, leading to the first planning process to manage those trends. Bishop O’Leary appointed women for the first time to positions of leadership in the Office of Catholic Schools, the Diocesan Tribunal and the Chancellor’s Office. Like Bishops Healy, Walsh, and Feeney before him, Bishop O’Leary took frequent public stands on a number of social issues of importance to the Church. He retired for reasons of health in 1988 and received the title of Bishop Emeritus of Portland. In that role, he continued to assist the current bishop until his death on April 2, 2002. 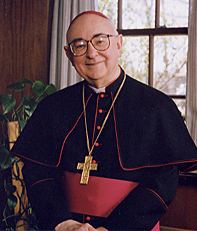 Born on September 12, 1928, Joseph John Gerry was named the tenth Bishop of the Diocese of Portland on December 27, 1988 and was consecrated as bishop on February 21, 1989. Prior to arriving in Maine, Joseph John Gerry, who was ordained to the priesthood in 1954, had served as Auxiliary Bishop of Manchester, New Hampshire for three years and as Abbot of St. Anselm Monastery for 14 years prior to that. During his tenure as Bishop of Portland, Bishop Gerry published roughly one pastoral letter per year, treating such topics as Vocations, the sacrament of Confirmation, and human sexuality; the first permanent deacons were ordained for the service of the local church; and a major renovation of the Cathedral of the Immaculate Conception was completed in 1999 in time for the Diocese of Portland to observe the Great Jubilee of the year 2000. A new Saint Dominic High School was built and opened in 2002, realizing a long-held dream of its alumni and supporters. Upon reaching the mandatory retirement age of 75 in 2003, Bishop Gerry submitted his letter of resignation to Pope John Paul II. His resignation was accepted on February 10, 2004. Bishop Emeritus Joseph Gerry retired to Saint Anselm Abbey in Goffstown, New Hampshire.

Born on March 19, 1946, Richard Joseph Malone was named the 11th Bishop of the Diocese of Portland on February 10, 2004 and was consecrated as bishop on March 31, 2004. Born in Salem, Mass., Bishop Malone graduated from St. John Seminary, Boston with a B.A. in philosophy, a bachelor's degree in divinity and a master's degree in biblical studies and was ordained to the priesthood in 1972. In 1981, Bishop Malone earned a doctorate in theology (Th.D.) from Boston University and a licentiate in sacred theology (S.T.L.) at Weston Jesuit School of Theology, Cambridge in 1990. Prior to arriving in Maine, Bishop Malone served stints as the director of the Office of Religious Education and as the Secretary of Education for the Archdiocese of Boston. He was appointed Auxiliary Bishop of Boston, South Region in 2000. As Bishop of the Diocese of Portland, Bishop Malone oversaw an ambitious consolidation of parishes in Maine. He also continued to maintain and improve the diocese’s safe environment programs in compliance with the Charter for the Protection of Children and Young People. During Bishop Malone’s tenure, over 10,000 Catholic Church employees, volunteers, priests and educators in Maine that work with children have been trained in the safe environment program, which includes mandatory background checks. On May 29, 2012, Pope Benedict XVI named Bishop Malone the 14th Bishop of Buffalo, NY and he was installed on August 10, 2012. Appointed by the Holy See, Bishop Malone served as Apostolic Administrator of the Diocese of Portland until the installation of his successor, Bishop Robert P. Deeley, the 12th Bishop of Portland, on February 14, 2014.