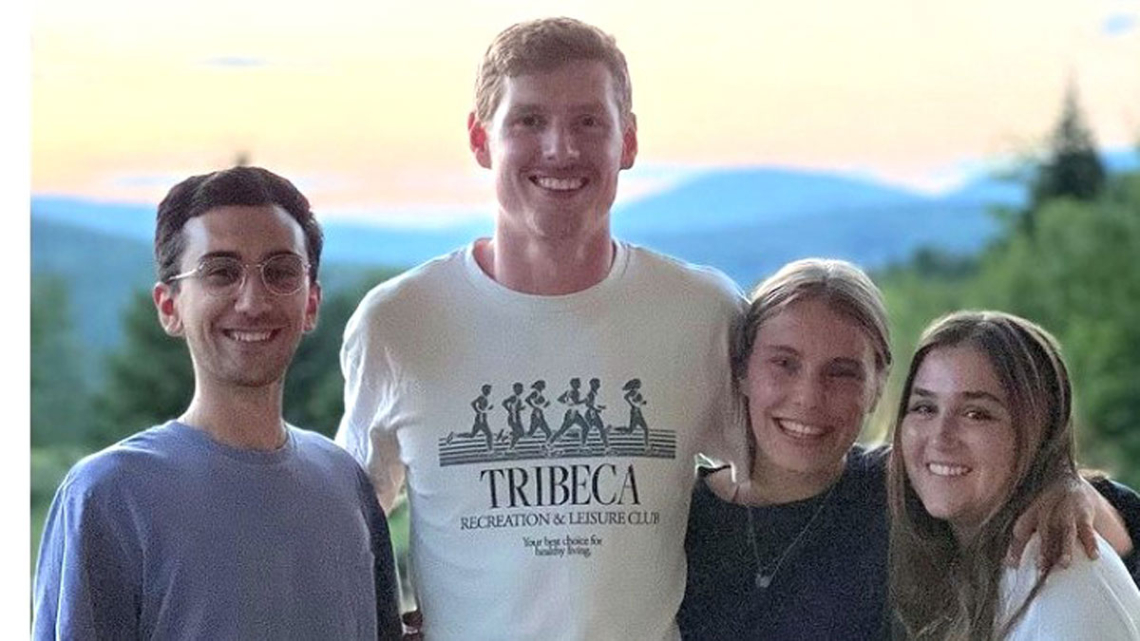 With changing societal norms, crowded schedules for both priests and parishioners, and sprawling parish boundaries, visits to homes by priests have become much less commonplace than they once were. Two parishes in western Maine, however, are striving to change that, although with a twist.

“The model for it is simply what pastors have been asked to do historically. In a certain sense, it’s an attempt to sort of reimagine or re-envision that,” says Father Paul Dumais, pastor of St. Joseph Parish in Farmington and St. Rose of Lima Parish in Jay.

Growing up in Madawaska, Father Dumais says he remembers the days when pastors made parish visits to parishioners’ homes each fall. He says when he first was assigned to the parishes in Farmington and Jay, he attempted a modest version of that by holding small group meetings in some outlying towns. He says, however, he recognized the need to do more, especially in the wake of the COVID-19 pandemic.

“I think this is what we need to be doing in general, and I certainly think we need to be doing it post-COVID, reasserting the relationship dimension of parish life, beyond the transactional dimension of parish life,” he says. “We just can’t sit in the office and wait. We have to move beyond the status quo of waiting for people to contact us. I think we have to take some initiative and reach out beyond the ordinary pathways of pastoral care.”

To help him accomplish his goal, Father Dumais received the help of a group of young adult missionaries — the Saint Isidore Corps.

The Saint Isidore Corps was founded by James and Whitney Hetzel, owners of The Catholic Company, an online retailer of faith-based merchandise. From Charlotte, North Carolina, the Hetzels have been spending summers in Maine for the past 15 years and became friends with Father Dumais.

Whitney says they were struck by Father Dumais’ busy schedule and by the challenges that come with living in rural Maine, which they found to be much different from their suburban community in North Carolina.

“To come here and just see the distance people had to travel to get to Mass, just the flavor of Catholicism up here, we were just intrigued and wanted to see if there was any way we could help and get involved,” Whitney says. “We asked Father Paul if there was a way that we could start something where we provided — we weren’t even sure how many — but some missionaries to help with whatever he needed.”

The result was the establishment of the Saint Isidore Corps. Named after the patron saint of farmers and rural life, it is dedicated to serving rural, impoverished communities through performing Christ’s beatitudes. Its focus is on the ministry of presence.

“It’s a win-win approach,” says Father Dumais. “They are testing their capacity to develop this missionary initiative, and it made sense for this to be the location last summer and this summer.”

The aim was to have young adult missionaries engage in various aspects of parish life including liturgy and devotion, faith formation, and parish social ministry. This past summer, four young adult missionaries, joined by a fifth on weekends, participated in daily Mass, adoration, and prayer; joined in Monday faith formation sessions; helped at the St. Rose of Lima Thrift Store and at the farmer’s market; and, most especially, made visits to parishioners’ homes.

In all, Father Dumais and the young adults, who served in pairs, visited nearly 175 homes.

“It was very welcoming,” says Christopher Spiegel, age 26, who served as one of the missionaries, as well as the parish coordinator of the project. “For people to receive us with such generous and open arms, it was a beautiful witness.”

To get the project rolling, the parish sent out postcards to hundreds of parishioners, letting them know about the initiative. They then scheduled appointments, starting with parishioners already actively engaged in the parish so that the young missionaries had a chance to get comfortable with the visits.

Each pair of missionaries visited three to four homes a day, four days a week. They say, while people received them warmly, there was often some initial curiosity, if not skepticism. The missionaries assured them that they were just there to socialize.

“We weren’t asking for money. We weren’t asking people to volunteer more. We weren’t worried about people’s attendance at Mass. We were really just there to be present to people and to be in their home and experience their life and what they brought to the community,” says Thomas. “We were there to facilitate that feeling that community is still something that is important, especially today, when a lot of things have gone to a screen.”

“It is just to emphasize that ministry of presence and just to be present with people,” says Whitney. “I think that’s so important today, more so than ever, because we’re always so busy. I do think there are certain things that make it harder — technology and COVID, coming off that. It just seems that this is a timely endeavor.”

The home visits began with the missionaries providing the background of the Saint Isidore Corps, but from there, the conversation was most often dictated by the parishioners. There were stories about grandchildren, tours of homes, and shared meals.

“The missionaries all said they gained a bunch of weight because everyone offered them cookies, and blueberries, and pizza,” says Whitney.

Among those the missionaries visited was the Davis family from East Wilton, who says the visits went very well.

“We could tell it wasn’t exactly in their wheelhouse to go about doing such things, but they handled it extremely well. They were very mature, very eloquent. We had a really good conversation, just about everything and anything,” the couple says. “We just talked and talked and talked. We enjoyed their company to the nth degree.”

The Davises say they discussed some of the challenges of being Catholic, as well as the rewards.

“We talked about God moments when certain things happen to you that you say, ‘That’s not normal. That’s not a coincidence. That’s a God moment.’ We exchanged a few of those.”

Before being accepted into the Saint Isidore Corps, the missionaries went through an interview process to ensure they had a good grounding in the Catholic faith. The visits, however, were intended to be social, rather than pastoral, so any questions or concerns were brought back to the parish.

Father Dumais says, although they weren’t able to connect with all parishioners, he is pleased with how the initiative turned out.

“It was very good. It was received well from my point of view,” he says. “It’s also been encouraging for parishioners to see young people who are engaged in the faith and are willing to be present and be helpful.”

“It really gave us a good feeling that, as we get older, there is somebody to take our place. I think the Catholic Church will be around for a while with young people like that,” the Davises say.

The young adult missionaries say they found it encouraging, too.

“You can just see the light. His light was so bright through these people,” says Christopher, who is from Tampa, Florida, but is now living in Maine and serving at the parishes. “I open up with a prayer every time — ‘Come, Holy Spirit,’ but to see it incarnationally before me and to see the joy that people share or that we could bring as outsiders, that was a big takeaway.”

“The biggest thing I took away from doing this type of work was that the parish and the Catholic community are really in each person. It’s not something that just magically comes together because there is a priest there. The priest can only do so much,” says Thomas, who is currently attending Belmont Abbey College in North Carolina. “I think it will help me down the line, especially with being involved in a parish and being involved in the Catholic community. I think that is going to be very valuable, and I think that is what you need to be able to do to hold on to your faith.”

Father Dumais is looking to add a position, at least temporarily, to continue the parishes’ outreach, while Whitney says she is hoping that the Saint Isidore Corps will expand to other parishes and states.

To join the corps, someone must have completed at least three years of college. The missionaries receive a stipend from The Catholic Company, with the parishes providing or covering the cost of room and board. To learn more about the program, visit www.saintisidorecorps.org.