A teen's journey of discovery 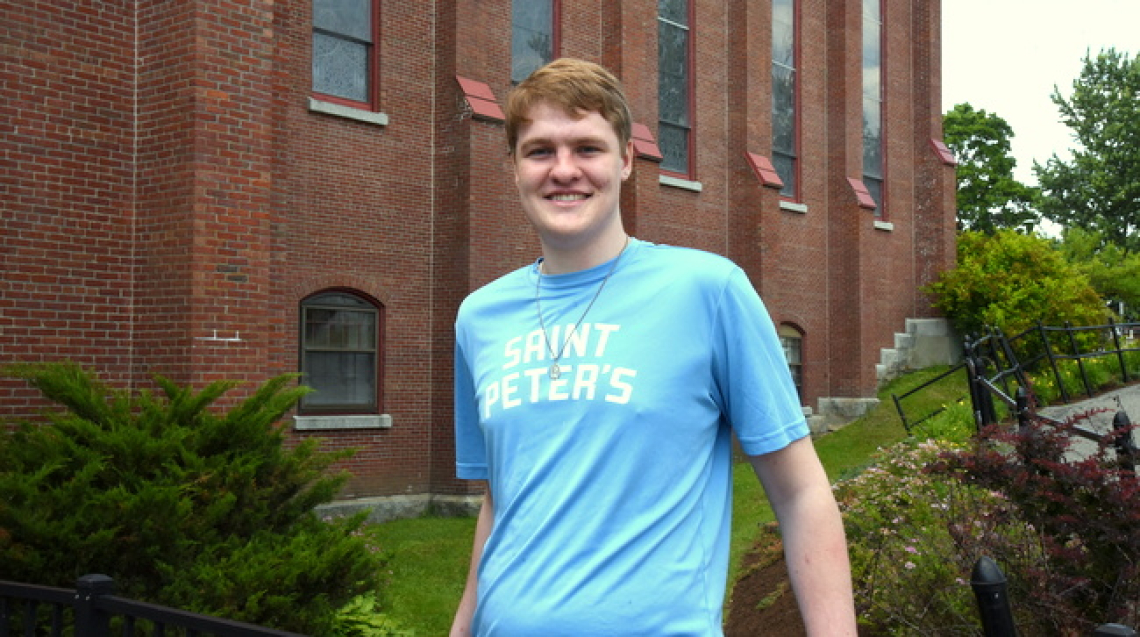 For 18-year-old Ryan Young of Brewer, most days start the same way, with the Morning Offering, a brief prayer dedicating all that he will do and encounter that day to God.

“I always try to go before the image of the Sacred Heart of Jesus and pray that,” he says. “Praying in the morning makes the difference in a day to me.”

With a devotion not only to the Sacred Heart of Jesus but to the Blessed Mother, Ryan says he also prays the Rosary, and during the summer, he prayed the Little Office of the Blessed Virgin Mary, which is similar to the Divine Office but with a focus on Mary’s role in salvation history.

“A lot of my prayer life now is a devotion to Mary, is the Rosary, Marian consecration. I have my Miraculous Medal,” Ryan says.

It’s quite a change from a few years ago when Ryan was a young teen with a lot of questions and doubts.

“We went to a Congregationalist church. It was really great, but I feel like I always had a lot more questions than I felt Sunday school could answer,” he says. “I was a Christian but not really with a full understanding of what that meant or actually living it out intentionally.”

With his passion for learning, Ryan, who was then a student in the Brewer Community School’s Gifted and Talented Program, went in search of answers.

“I read a lot of stuff like popular science stuff, and I watched a lot of videos, especially YouTube videos. Originally, I was just studying math, and then, it went into science, and then, it went into questions of philosophy, such as freewill,” he says. “I think a big question for me, learning about science, was how is it that all this material stuff that makes us up can cause us to do things, and yet, we still have agency over and above that?”

It was a question that led him to dive deeper.

“I think that God was really leading me because I really didn’t like that picture that we’re just matter in motion,” he says.

His questions and research took him to a multitude of sources, among them, the new atheists, the Veritas Forum, the Protestant philosophy scholar William Lane Craig and, eventually, St. Thomas Aquinas.

“Obviously, the person who would eventually satisfy me was Thomas Aquinas,” says Ryan.

St. Thomas Aquinas provided five arguments for the proof of God’s existence, among them that an initial act is necessary to bring something from potentiality to actuality. Aquinas said that everything is set in motion by something else, and therefore, there must exist an initial, unmoved mover, God.

“I thought it made a lot more sense why you had to have one cause that also was God. It was very clear to me that if you have something that is purely actual, that is very much like God. He is omnipotent first of all, and second of all, I think some of Aquinas’ arguments were really good that that being had to have knowledge, and so, it would be personal,” says Ryan.

Ryan then turned his focus to Jesus. He says he learned there was widespread agreement among scholars that Jesus lived and was crucified. For proof of the Resurrection, he turned to the Bible and 1 Corinthians 15, in which St. Paul assures the fledging Church in Corinth that Jesus was resurrected, mentioning the hundreds to which he appeared, and says that the same fate awaits those who are believers.

Ryan next sought to explore the distinctions between the Catholic and Protestant Churches. He attended Mass at the invitation of a fellow Boy Scout who was Catholic, discovered the online teachings of Bishop Robert Barron, and began to research the teachings of the early Church Fathers and early Christians.

“How did they see the Church, and how did they see the Bible? And what I found was that they believed in a Church that had apostolic succession, that had succession from the apostles. They believed in a Church that had authority to teach, and they believed that sacred tradition was also authoritative,” says Ryan. “That made sense to me because I felt that everyone read the Bible through their own tradition, so if your tradition does not go back to the apostles, then, I don’t see how you can have good grounding.”

Ryan continued to read and learn and grow, listening to Patrick Madrid and Catholic Answers Live on the radio and reading the teachings of St. John Henry Newman, to whom he had been introduced through Bishop Barron.

They would help Ryan resolve some of the remaining questions he had, including the role of Mary, and in 2019, he began participating in the Rite of Christian Initiation of Adults (RCIA), entering the Catholic Church in 2020.

While at first, he says he found the Mass imposing, now he sees the beauty in it.

“As I’ve gotten into it, I’ve realized it’s quite simple at its base,” he says. “The Mass started to really seep into me. To this day, I love the “Gloria.” I think it is just the most beautiful hymn.”

Ryan says his journey has changed his life. He says, for instance, that prayer has helped him deal with the anxiety issues from which he suffers. He also likes to share what he learned with others.

“I am big into evangelization. Basically, I like to talk to my friends. I have a couple of friends whom I talk philosophy and theology with. I have one guy who is really interested in the Eucharist,” says Ryan. “God just works without your really acting. He just put some people in my life who I was able to bring closer to Christ at high school. I’m never going to cause them to become Christian. Maybe some will, but it won’t be because of me. It will be because God will work through me.”

Ryan says he also tries to witness to his faith. That has included serving on the diocese’s Catholic Youth Leadership Team (CYLT), which plans youth events.

“I think the biggest thing is the small things, like when somebody asks you to do something, volunteering and being more active, sacrificing for others, going out of your way just to be with others,” he says.

For his Eagle Scout project, Ryan designed, built, and installed birdhouses at the Brewer Community School. He has also participated in youth ministry service opportunities, and he has shoveled driveways and sidewalks for neighbors.

While he describes himself as an introvert who tends to be melancholic at times, he says being Catholic has made him more joyful.

“I’ve definitely been more interested in being with people. A lot of that has been the saints, devotion to the saints. Pier Giorgio Frassati and St. Francis de Sales have really given me a picture of how someone who is more inward, and maybe more contemplative, can live an active life,” Ryan says.

Ryan says he also seeks to follow the example of St. Stephen. He says he was moved to tears while watching a YouTube video discussing the saint’s stoning death and plea for forgiveness for his persecutors.

“I really realized that is the way to live: self-sacrificial love and forgiving others. I didn’t live it the right way, but I just knew in that moment that that was the right way to live,” he says.

Ryan is now beginning classes at the University of Maine in Orono, where he plans to major in biology and minor in philosophy. Despite the pressures of college, he says he has no doubt his faith will continue to grow and thrive.

“I wouldn’t live any way else,” he says.