Rediscovering the joy of the Eucharist 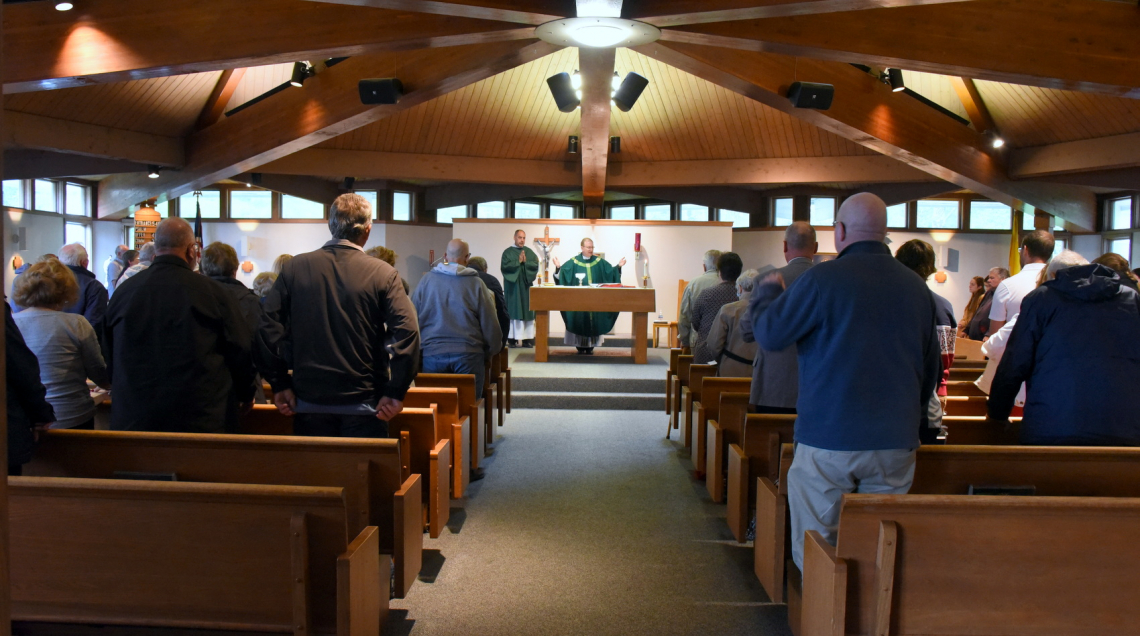 Edward Yock of Hampden describes attending Mass as a necessity for him and his wife.

“Let me tell you, if we weren’t attending, I think our lives would be quite different,” he says. “It’s something we need to keep us going in the right direction.”

Janet Grant of East Millinocket says she is drawn to Mass because there is no greater gift than the Eucharist.

“To see the bread and wine being changed into the body and blood of Jesus and then to be able to receive it, that’s everything,” she says.

Evelyn Fraser of Freeport says attending Mass means so much to her, she doesn’t know how people can stay away.

“The spirituality of the Church and of Mass gives you so much to look forward to each week,” she says. “It gives you energy and love.”

These parishioners are among the many expressing joy at being able to regularly Mass again, now that pandemic-related attendance restrictions have been lifted.

“I was just in there thinking that it feels really good to be back with everybody as family,” says Yock, who attends St. Matthew Church in Hampden, part of St. Paul the Apostle Parish.

Yock says he started attending Mass monthly in June 2020 when churches first reopened to the public but attendance was capped at 50 people. On the other weekends, he watched via livestream, something he says was a valuable option to have but can’t compare to being present in person.

“Mass is about community. It’s not about us being islands but about us being with each other. That’s the piece that’s really quite nice, not to mention the pomp and circumstance: the singing, the rituals. There is a reason we have rituals. It really ingrains in us parts of the Mass, so it is just good to celebrate it in its fullness again,” says Yock.

Grant feels similarly. She watched Mass on television when it wasn’t being publicly celebrated at St. Peter Church in East Millinocket, part of Christ the Divine Mercy Parish, but says, along with the Eucharist, something valuable was missing.

“The Eucharist is the focus, but your fellow Christians sitting in the pews around you also add to the spirituality of the Mass. Sitting at home, watching it on TV, you don’t get that,” she says. “It’s the sharing of the faith. You hear the word. You break it open together. You talk about it maybe afterwards on the way out or later in the week if you see somebody. It bolsters you. It makes you think. We’re there to pray together, to praise together, to worship together.”

Grant says she believes that in some ways not being able to attend Mass in person for a while led to an increase in her spirituality.

“It made me realize how much I wasn’t getting, how much I was missing by not being part of the community, seeing your friends and neighbors,” she says.

Unfortunately, these parishioners and others are not seeing as many of their fellow Catholics in the pews as they did before the pandemic, something they would like to see change.

Gretchen Sayward, who attends St. Jude Church in Freeport, part of the Parish of the Holy Eucharist, says she is so passionate about it that she wrote a letter to her fellow parishioners, which was shared in the parish bulletin.

“I love St. Jude. I love every single parishioner at St. Jude,” says Sayward. “It breaks my heart to see people afraid to go to Mass.”

Sayward says she suffers from tumefactive multiple sclerosis, but that hasn’t kept her away. She, too, returned in June 2020, as soon as public Masses began to be celebrated again.

“I need Communion. It’s that important to me. Spiritual Communion is fine, but I need the actual host. It fills me with the Spirit,” she says. “Without faith, I would be gone. I wouldn’t be here.”

Like Sayward, Jim Geary, who attends St. Peter Church in Southwest Harbor, part of the Parish of the Transfiguration of the Lord, says he didn’t hesitate to return once churches reopened to the public.

“We were on the first list,” he says. “We started going immediately when the parish opened up.”

Geary says he never felt at risk at St. Peter Church, describing it is a close-knit congregation.

“It’s never been an issue,” he says. “The people who attend Mass every week, the year-round local people, they’re friends, and they’re part of the community.”

He says not being able to gather left a void in his life and the lives of fellow parishioners, and he’s glad they are able to be together once again.

“We missed just that personal interaction,” he says. “Whether it was Saturday afternoon in the winter months or Sunday mornings the rest of the year, we would have coffee hour after Mass, and we would just talk and socialize with people. We were missing that dimension in our lives, so it was important for us to go back, in addition to just the spiritual value of going to Mass every week.”

While the pandemic situation continues to evolve, these parishioners hope others will follow their lead and accept the Lord’s invitation to once again fully participate in the Sunday Eucharist.

“Hopefully, we’re going to get over this hurdle, and people will realize how important our faith is, how much God gives us,” says Grant. “We need to be so thankful.

Grant says she also hopes each parishioner realizes how much he or she brings to the celebration of Mass and how much is lost when they’re not there.

"Please come back because, as a faith community, we’re incomplete without you,” adds Yock.

While some have yet to return to Mass, parishioners and priests are grateful that so many have come back to rediscover why the celebration of the Eucharist is the source and summit of the Christian life.

“As a young priest, it’s been wonderful seeing so many of our parishioners return to the celebration of Sunday Mass,” says Father Alexander Boucher, who was ordained during the pandemic and now serves as a parochial vicar of St. Matthew Parish in Limerick and St. Thérèse of Lisieux in Sanford.  “Every weekend, people come up to me and say, ‘Father, it’s so good to be home.’ They’ve really been hungering for the Lord in the Blessed Sacrament. Since being ordained a priest one year ago, it’s been a pretty dramatic transformation from 50 masked and seemingly anonymous parishioners at Sunday Mass to celebrating Mass in churches that are getting fuller and fuller each week. I hope we can all discover, in a deeper and more profound way, the great gift that we have in the Eucharist and our Catholic parishes.” 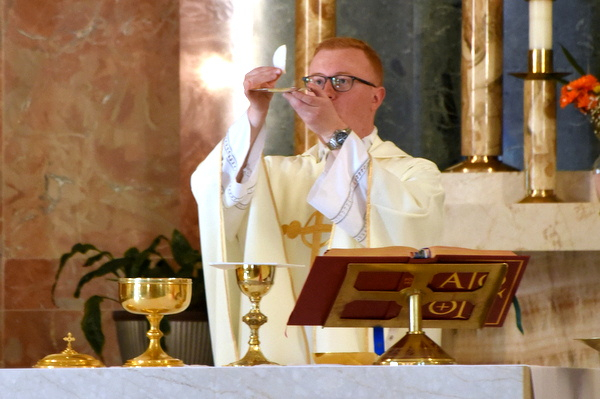