Offering a Century of Service 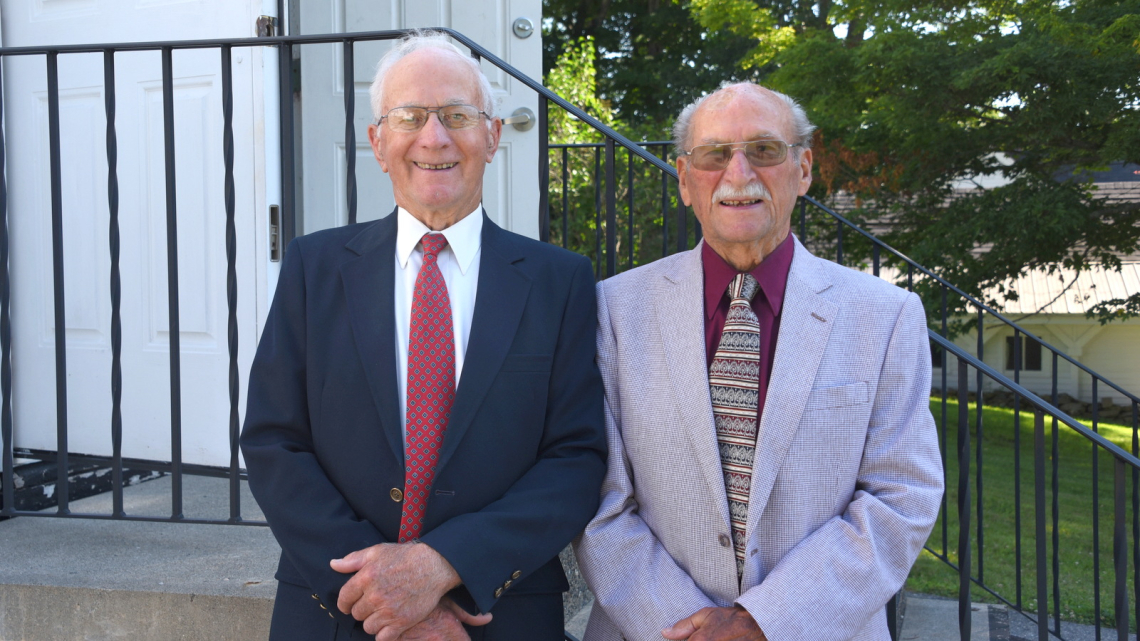 The Catholic Church is known for its many traditions, and at St. Gabriel Church in Winterport, there is one that dates back longer than most parishioners can remember. When it comes time for the offertory collection during Mass, parishioners know exactly who will rise from their seats to pass around the baskets — John and Reggie Rancourt.

And that may be a conservative estimate. Reggie says he is not exactly sure when he was first recruited to help out with the collection, but it was before he was drafted into the U.S. Army, and that was when he was 25 years old. He is now 93.

“Someone else was missing, so they grabbed me to take the collection. The next thing I knew, that person disappeared, and they said, ‘Let Reg do it,’” he says.

Other than his time in the Army, he’s been helping out ever since, although he says, at first, his availability was subject to his responsibilities as a dairy farmer.

“It all depended on if I got up in time and got the cows milked in time, so I could get there. If I was there in time, they always nailed me to help collect,” he says, laughing.

When he didn’t make the Mass at St. Gabriel, he attended a later one at Holy Rosary Church in neighboring Frankfort, where he also often helped with the collection.

“There was a fellow down there, a friendly fellow; he always got me to collect,” says Reggie.

At St. Gabriel, Reggie used to assist one of his brothers-in-law. After he passed away, Reggie knew exactly where to turn.

“He wanted the help, so I said yes,” says John.

“Go ahead and say I twisted your arm,” says Reggie.

“Somebody had to do it, so we volunteered,” says John. “If it helps you get to heaven, you do it.”

“We just figured that it was our duty more or less,” adds Reggie.

John has now been volunteering for about 40 years.

The fact that the pair have been serving together for so long comes as no surprise to those who know them. Growing up as brothers in a family of 16 children and being less than a year apart in age, there has always been a strong bond between them.

“They were really close, growing up together, in age and in their position in the family and always being together in their endeavors, farming together through the years,” says John’s wife, Ruth.

“It was good because you always had someone to fall back on if you couldn’t do something or if you were sick or something,” says Reggie.

On the dairy farm, there was always work to be done.

“Anywhere from 10 to 15 hours a day,” says Reggie. “If a cow was having a calf in the middle of the night, you would have to get out and help her. If you were haying, you might not get done until 11 o’clock.”

When six of their brothers went to serve in WWII, Reggie and John were the two boys left to help their father run the farm, which included 100 cows and 700 hens, along with crops. Back then, John and Reggie say they used horses, not tractors, to plant and plow.

“John and I were just teenagers, so we had to take over all the work, milk the cows and everything and still go to school. It was tough there for a while. We thought it was anyway,” says Reggie.

Not that the brothers didn’t find time to get into a little mischief.

“Remember when Mom would send us up once in a while with a couple of dozen eggs to get some sugar or flour?” Reggie asks John. “Him and I used to take a few extra eggs, so we could get little pieces of candy, until our sister squealed on us. That was the end of that deal.”

Despite the long workdays, there was never the thought of missing Sunday Mass.

“Absolutely. If you whimpered a little bit, Dad would just point his finger at you, and you didn’t dare do nothing else,” says Reggie.

During Lent, work on the farm stopped at 3 p.m., so they could pray the Rosary.

“The whole family would say the Rosary. Sometimes, we had a friend over, and they couldn’t understand what we were talking about — praying the Rosary,” says Reggie.

The brothers say they are thankful that faith has always been a part of their lives.

“It means a lot to me,” says Reggie. “I don’t know what I would do without it. I really don’t because I’ve done it since day one. Right?”

John has battled several health issues in the past few years, and Ruth says their faith has helped them through it.

“He has cancer. He has had strokes. He has had a lot of things, but God brought us through it, and the faith. If we didn’t have the faith, it would be so different, and having the community of people to support us, too, in the church, through the cards, the emails,” she says. “It’s simply being noticed and knowing we have that faith-based group of people to uplift us with their prayers. I don’t know how people go through hard times without it. I’ve seen his faith strengthen because of all of that.”

John and Reggie say they like being part of a smaller, close-knit church community, like the one at St. Gabriel.

Being part of a small community, they say they recognize the importance of helping out where they can.

“When you have a small church like that, a lot of people have to volunteer to get certain jobs done,” says Reggie.

Along with the offertory collection, through the years, the pair has helped dig out a cellar for the church and put a roof on the church hall. For many years, Reggie was also the one who rang the church bell.

“I used to ring that bell every Sunday for about 30 years,” he says.

Reggie has also been involved with the American Legion and with the Winterport senior citizens group, while John was active with the Riverside Riders Snowmobile Club, helping to groom the trails, and was also involved with the Knights of Columbus.

John and Reggie say they don’t know where the time has gone but say that for as long as they’re able, they’ll continue to rise from their seats to take up the offertory collection, one on the right side of the church, the other on the left.

“Sooner or later, somebody is going to have to take our place,” says John.

“I guess they’ll have to find somebody else to do it once we can’t,” agrees Reggie.

But, in the meantime, Reggie says, “It keeps us out of trouble 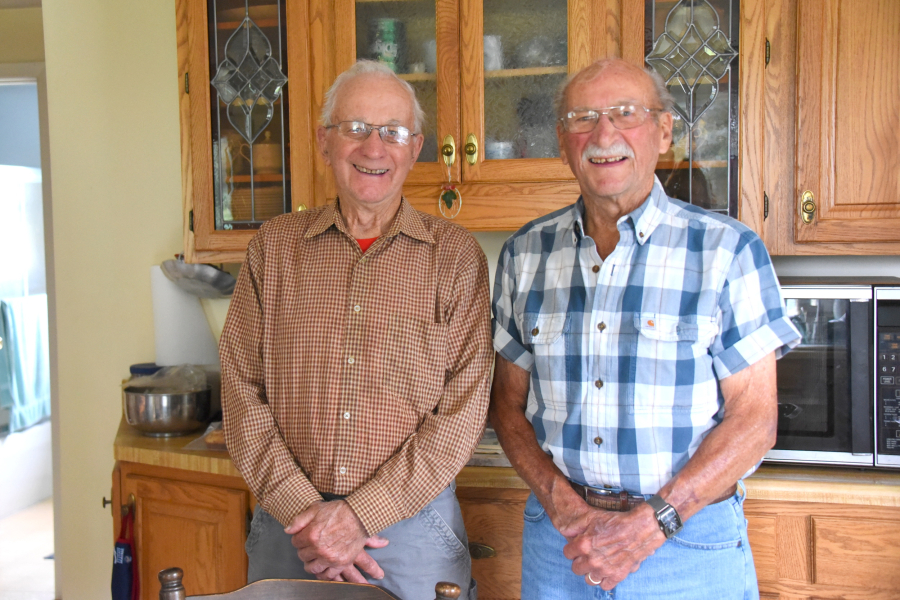 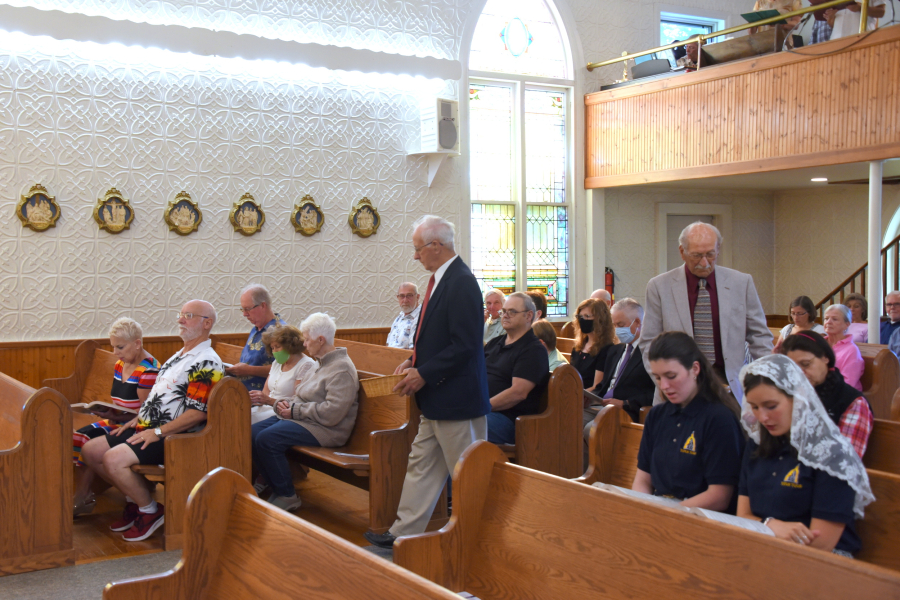