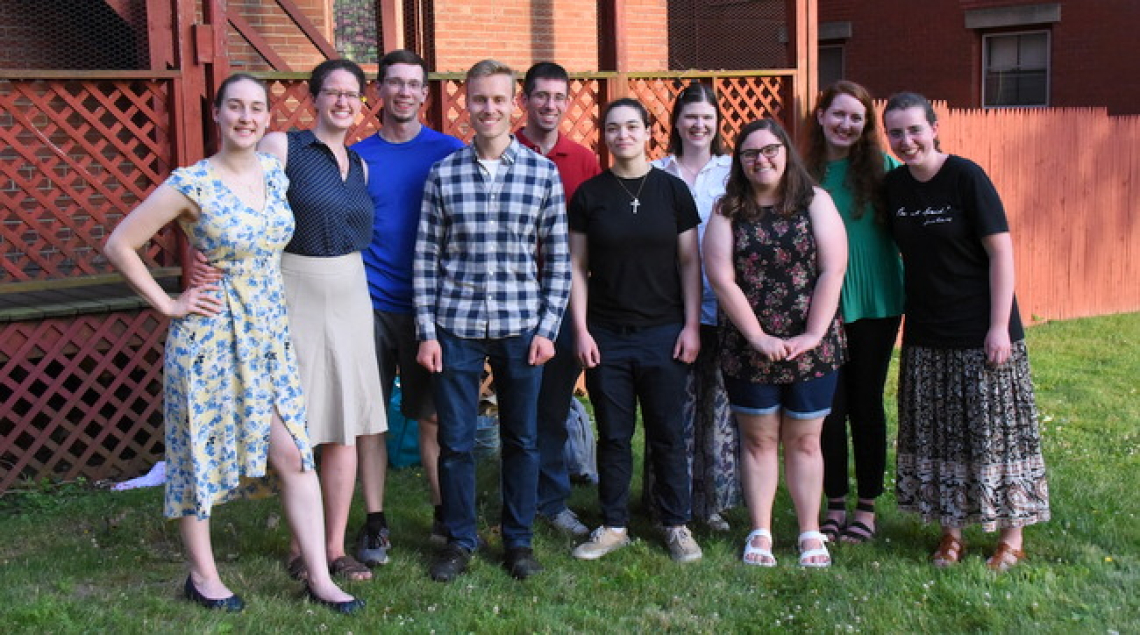 When 28-year-old Ian Davies moved to South Portland last August, he was looking to connect with other young adults in the area. He tried a few groups he found through an app but says something always seemed to be missing.

“I felt like a lot of the conversations, a lot of the friendships, were just kind of on the surface. Nothing was going deeper,” he says.

That is, until he discovered Casco Bay Catholics, a young adult ministry opportunity offered by the Portland Peninsula & Island Parishes.

“It’s just very relaxing to be in the presence of other Catholics my age,” he says. “It’s a personal connection to my faith and to others who share that faith, and in doing so, I feel like I’m able to form a deeper connection to the people around me. It’s understood that we all share a deeper connection in morality and in faith, so it’s just relaxing being around people who can comfortably discuss those topics as well as have a good time socially.”

Casco Bay Catholics is a ministry of and for young adults that combines spiritual enrichment with social engagement. There is a monthly Hour of Power in the chapel of the Cathedral of the Immaculate Conception and pizza and games on the lawn. There is evening prayer on Sunday, followed by going out to dinner or sometimes by a potluck supper. There was a retreat during Lent and a barbecue by Crystal Lake in July.

“It’s really a good blend,” says Ian. “We try to keep it very casual, but then, we’re also very open to deeper discussions.”

“I think that one of the things that has come about at a lot of these events and gatherings is that people who maybe haven’t been as involved in their faith feel comfortable coming to these events — one, because they may be looking for community in general, to come together with other young adults, and two, because they feel like it’s a welcoming way to dip their toes back into being involved in their faith,” says Abrey Feliccia, pastoral life coordinator for the Portland Peninsula & Island Parishes.

It was Abrey’s determination and drive that helped Casco Bay Catholics get started in fall 2021. She had seen the impact such a ministry could have while working as a campus minister at Cornell University in Ithaca, New York. When she moved to the Portland area for work, she started exploring the options available for young adults. She first found the Catholic Beer Club, but looking for something more ministry-focused, she approached Father Seamus Griesbach, rector of the cathedral and pastor of the other Portland Peninsula & Island Parishes, about getting something started.

“He was just very energetic and all on board with creating an opportunity for young adults to gather and get more connected in our community,” says Abrey, who was not working for the parishes at the time. 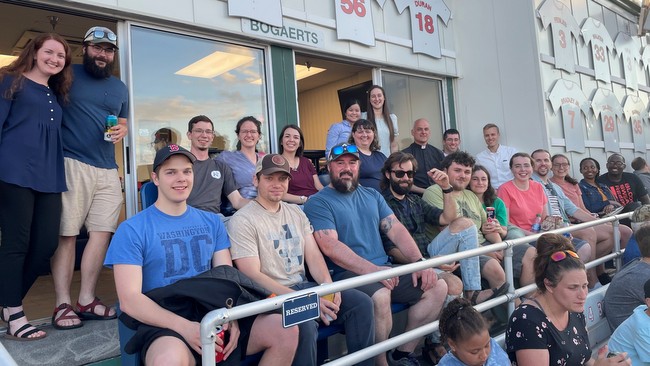 Abrey says both she and Father Griesbach recognized the importance of having the ministry be parish-based and having anchor points, the primary one being Sunday vespers, held weekly in the cathedral at 5:30 p.m.

“Vespers is open to everyone, but we thought maybe we could get a group of young adults to attend and that we would have prayer and some teaching to discuss after that. So, we started to have young adults go to dinner every Sunday after vespers or have a potluck once a month. That was the basis of forming a group,” Abrey says.

Ian, who is an altar server for vespers, says it is something he looks forward to every week.

“It’s a nice way to wind down from the weekend and kind of relax before starting the week over again,” he says. “You really just kind of let your mind relax, and listen to the hymns, and sing along, and really just let the words sink in. It’s a nice way to kind of center yourself and be in the moment.”

Ian says he believes being involved with Casco Bay Catholics has provided him an opportunity to grow in his faith.

“Just being around other young adult Catholics has really affirmed my faith and that it’s possible for someone my age to be connected to their faith,” he says. “I definitely have come back to that point of being surrounded by my faith and rooted in my faith. It is also very enriching because I find myself seeking God.”

“To have Catholic friends enjoying the same values, doing the same activities in a very faith-filled manner is very important to me because without God I have nothing,” says Casey Dillon, age 27.

Isabel says when she first learned about the ministry and an upcoming Hour of Power, she was hesitant but decided to give it a try. Now, she says she is grateful she did.

Those who participate in Casco Bay Catholics say it has led to great friendships.

“Doing stuff that is really fun together brings that camaraderie of individuals who are just striving for God and striving for holiness, and to be able to do it together is just a really amazing thing,” says Isabel.

While Abrey says it’s gratifying to see the bonds the young adults have formed, she also stresses the importance of continuing to welcome new participants.

“Our hope for it is that it is not a group of young adults, but it is really an active ministry,” she says. “We’re still exploring how to make that happen and continue to grow that.”

She says having Father Griesbach and other priests and religious regularly present is an important element.

“It automatically brings it to another level or depth and keeps it centered on faith. I think it has helped people feel more connected to our faith,” she says.

As their connection grows, Abrey says the hope is that it will lead the young adults to become more involved in their parishes, not just in Casco Bay Catholics’ events.

“We hope they go out and are participating in liturgical ministry and are helping with Masses at their parishes,” says Abrey. “We hope this can serve as an outlet for them to be more engaged.”

Abrey says she is pleased with how the ministry has taken hold in its inaugural year. She has seen some young adults travel dozens of miles to participate and others extend invitations to their friends.

“It’s been very encouraging to see so many people who really have a hunger for this type of ministry and for being more engaged in the faith,” she says.

She says they continue to look for more Catholic experiences and social activities in which the young adults can engage and also plan to reach out to other parishes to further spread the word about the ministry. Joseph Moreshead, faith formation director at the Parish of the Holy Eucharist in Falmouth, has already become actively involved.

Those currently enjoying Casco Bay Catholics say they want other young adults to know that if they come, they will be welcomed.

“I hope we can inspire more young adults to get involved in this group or to start others,” says Ian. “For those young adults who are really seeking something more, seeking God, I think it’s really important to get involved with a group of young people your age because you can relate to each other.”