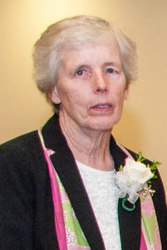 Please join in praying for the repose of the soul of Sister Barbara Anne Brennan, R.S.M., a Sister of Mercy of the Americas, who died at the age of 83, following a short illness.

Sister Barbara was born in Portland to John Joseph Brennan and Catherine Josephine Mulkern, the youngest of eight children.

In addition to her years in education, Sister Barbara’s work also took her to the Bahamas where she was a pioneer in developing the mission in the South Andros area before they had water and electricity. She also spent some time as a unit coordinator at Mercy Hospital in Portland; a resident service coordinator at Deering Pavilion in Portland, and an assistant librarian at St. Joseph’s College, and she spent a summer ministering in Appalachia.

Sister Barbara served on the boards of Mercy Hospital and Catherine McAuley High School and on the Sisters of Mercy Sponsorship Council.

Sister Barbara cared deeply for people and gave of herself to those in need whom she encountered – always willing to go the extra mile. She was also known for her love and devotion to her family and enjoyed entertaining guests.

To view the livestream of the Prayer Service and Mass, please visit https://www.facebook.com/ConroyTullyWalker

In lieu of flowers, donations may be sent to: Sisters of Mercy, 966 Riverside Street, Portland, ME 04103

Back to Obituaries Home