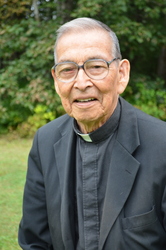 Please pray for the repose of the soul of Deacon George Stevens, age 92, who died on Monday July 7, 2014. In 1998, George was ordained a permanent deacon for the Diocese of Portland by Bishop Joseph J. Gerry, OSB as one of three native Americans ordained in that first class of permanent deacons.

Deacon George was born in Lewiston on January 5, 1922, son of George and Elizabeth Stevens. Following the untimely death of his mother, he was raised by his aunt Seraphine Lola Stevens in Pleasant Point. After attending school, he entered the Conservation Corps at the age of 17 and eventually enlisted in the Army Air Corps, serving during WWII. Following the war,  hereturned home to Indian Township and completed his high school education. He worked at Quoddy Lumber in Princeton and then for Georgia Pacific in Baileyville, retiring with over 20 years of service. Following his retirement, he became the public works director for Indian Township in 1972, a position he held until his passing. He also served several terms as the tribal repesentative to the Maine State Legislature.

A complete obit can be found on the website of Mays Funeral Home.

Please pray for the repose of the soul of Deacon George Stevens and for the consolation of his 15 surviving children and many, many grandchildren and great-grandchildren.  George was a beloved member of the permanent deacon community and an inspiration to all who knew him.