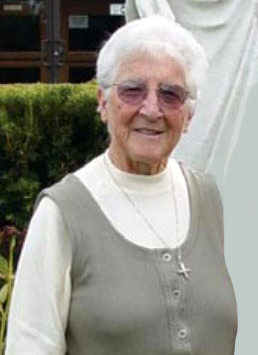 Please pray for the repose of the soul of Sr. Dorothy Bujold, CSJ, who died Friday, January 15, at the age of 94.

Sister Dorothy was born on February 11, 1926, in Waterville, the daughter of Leonard and Evelyne Bujold. She joined the congregation of the Sisters of Saint Joseph of Lyon in 1946 and became a teacher at the South Berwick Academy boarding school for girls and then a teacher and principal at Holy Family School in Lewiston.

Sister Dorothy went on to serve in leadership positions, first as the assistant general of her international religious community, a position that took her to France.  From there, she went to work at the International Union of Superior Generals in Rome, where she served as the secretary-general.  Returning to Maine, she accepted a position with the Diocese of Portland serving in the Office for Religious.

When she was in her early 60s, Sister Dorothy moved to Senegal and the Ivory Coast in West Africa as a missionary assisting those most in need, work that she loved.  Returning to Maine in 2002, at the age of 76, she moved to Bingham to be the religious presence in that rural community.  Her final years were spent in Waterville/Winslow the heart of the Sisters of St. Joseph in Maine.

May Sister Dorothy’s soul and the souls of all the faithful departed rest in peace.  Amen.