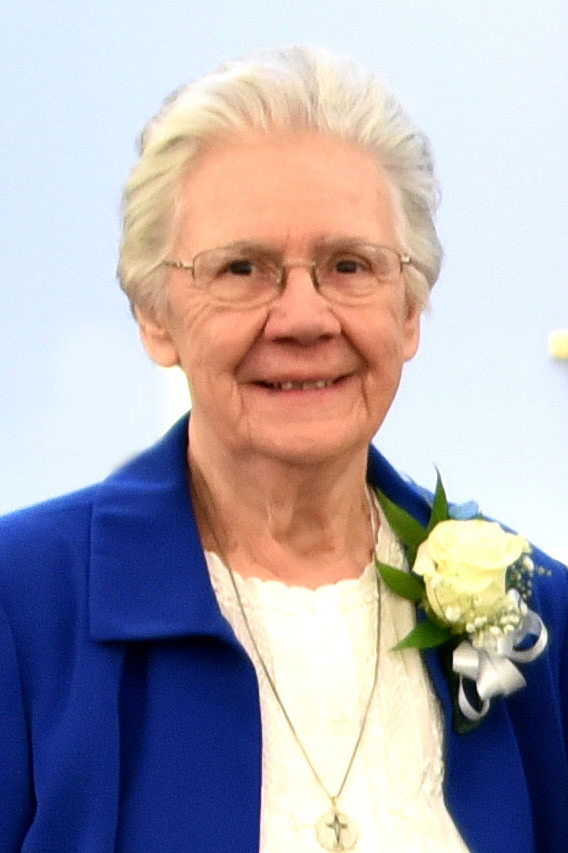 Please pray for the repose of the soul of Sister Jean Little R.S.M., (formerly Sister Mary Edwin), who died peacefully on Friday, October 29, 2021, at the age of 82.

Born in Portland on December 13, 1938, Sister Jean was the daughter of Harold Edwin and Mary Catherine Mannette Little. She attended St. Patrick Elementary School and then Cathedral High School in Portland, before entering the Sisters of Mercy in 1957. She then went on to earn a B.S. in education from St. Joseph's College of Maine in Standish and a M.Ed. from Boston College.

Sister Jean taught at Cathedral Elementary School in Portland, St. Mary School in Augusta, St. John School in Bangor, St. Joseph School in Portland, and St. Athanasius School in Rumford, before being asked, in 1968, to join the newly established Diocesan Bureau of Human Relations Services, the forerunner of Catholic Charities Maine. Among her responsibilities was overseeing the transition of Holy Innocents Home and St. Elizabeth’s Orphanage into St. Elizabeth's Child Development Center, which still serves children to this day. She described her years at Catholic Charities as “marvelous.”

In 1978, Sister Jean was selected by her community to be a member of the Renewal Team, after which she was called to be superior of St. Joseph's Motherhouse community. She then served as a pastoral associate at St. Mary of the Assumption Parish in Biddeford, before being elected to the leadership team of the Mercy community. She served as ministry director from 1990-1994 and also served on the Bishop’s Task Force for the Future of the Church in Maine. In 1994, Sister Jean was named co-director of the Mercy Associates before becoming director of volunteer services for the refugee resettlement program of Catholic Charities Maine. In 1998, Sister Jean was elected regional president of the Portland community of the Sisters of Mercy of the Americas, a position she held until 2006.  After a sabbatical, Sister Jean was then invited to serve as director of faith formation at St. Anthony of Padua Parish in Westbrook.

Reflecting on her many experiences at the time of her 60th jubilee in 2017, Sister Jean said, “I would not want to trade my life for anything else, because as I have gone through my experiences, with the good times and the not-so-good-times, they have been very rich. I feel very blessed.”

In addition to participation in numerous community leadership conferences for the Sisters of Mercy of the Americas, Sister Jean served on the boards of Mercy Hospital in Portland, St. Joseph's College of Maine, and Catholic Charities Maine.