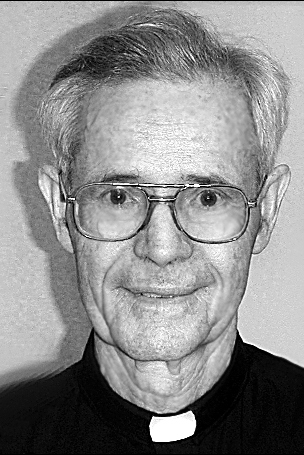 Please pray for the repose of the soul of Father Robert Regan, SJ, the son of Francis A. and Mary Regan, who passed away on December 2, 2021.

A member of the Society of Jesus, Father Regan was ordained to the priesthood in 1959 at Weston College in Cambridge, Mass. He served at Baghdad College in Iraq until its closing in 1969 and then was assigned to Holy Family College in Cairo, Egypt, from 1969 to 1994. At that time, he joined Maine's Jesuit community, becoming pastor of St. Pius X Parish in Portland from 1994 to 1996. In 1996, he transitioned to becoming a parochial vicar at the parish, which merged with St. Joseph Parish and St. Patrick Parish in 2011 to become Our Lady of Hope Parish. Father Regan was known for his wonderful sense of humor. He also helped to develop the parish's ministry to the homebound, which continues today. Father Regan served in Maine until 2016 when he went to reside at the Jesuit Community's Campion Center in Weston, Mass.

Father Regan is survived by his brother, Francis Regan, as well as several nieces and nephews and his Jesuit family.