Planting Seeds for the Future 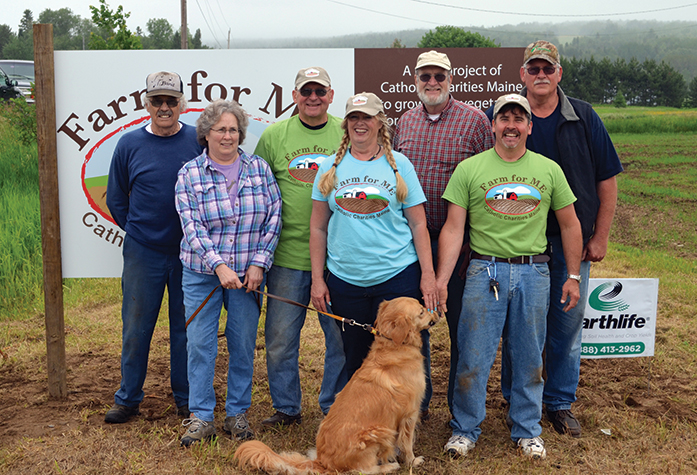 It’s not often that the spreading of fertilizer is cause for celebration, but that was the case on a farm in Presque Isle this summer.

The three-acre site was being prepared for the first crops to be planted as part of Catholic Charities’ Farm for ME project.The pilot program will provide fresh vegetables for the Catholic Charities’ Home Supplies and Food Bank, which supports 25 food pantries throughout Aroostook County. 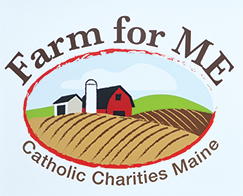 While boxed and canned goods are the selections most commonly found on food pantry shelves, Dixie Shaw, the director of the food bank, thought it was time for a fresh approach.

“We live in an agricultural area, and it makes no sense to me to have to have food shipped south and then shipped back again. So this is going to allow us to have fresh and locally-grown veggies for our pantries,” she says.

The project has been in the planning stages for a couple of years, but two significant contributions finally got the tractor wheels rolling.

One came from Jim and Martie Pritchard, owners of the Barking Barn Farm in Presque Isle. The Pritchards say they have always enjoyed visiting Catholic Charities and were familiar with the agency’s work because Jim had been involved with the Grace Interfaith Food Table (GIFT) in Presque Isle. Without realizing that Catholic Charities was already considering a farm project, Jim approached Dixie to offer the use of some of their land. Jim believes the timing was more than coincidence.

“I would have to say sometimes the Holy Spirit just kind of leads you, and He leads us a lot,” says Jim. “It was perfect timing, the perfect minute, and we’re just real happy to be able to help.”

The Pritchards say they wanted to give back for the many blessings they have received in their lives, including their beautiful farm.

“When you come around the curve, and you start up the hill, you just can barely see the barn, kind of smiling over the valley. And from 18 years ago, when we first moved here, every time I came over that hill, I said a prayer of thanksgiving: ‘Gee, God. Thank you. I can’t believe this is ours,’” says Martie.

The Pritchards have always considered themselves stewards of the land, rather than owners, and they believe they shouldn’t be the only ones who benefit from it. The Pritchards’ only stipulation was that it be an organic farm.

Dixie says the offer made the project possible. “We’re not able to go out and buy a farm. We’re not even able to rent farmland because anytime you add cost to any operation, it makes it less doable. So for somebody to come through the door and offer up a farm for our use, what else could I ask for?”

The Farm for ME project would also never have taken root if it weren’t for the expertise and generosity of Catholic Charities’ Aroostook County neighbors. They include Chip Beckwith, a former potato farmer who is now a project manager with Casella Organics. A parishioner of the Parish of the Precious Blood, he had worked with Dixie in the past.

“Dixie called me and told me she was doing a project like this, and she knew me from way back and asked if I could help and be on the steering committee, and I said yes,” he says.

In addition to Chip’s guidance, Casella Organics donated a tractor trailer full of poultry litter and another of wood ash to fertilize and lime the land. He says it took a lot to get it ready for planting.

“We knew it needed lime. It hadn’t been in production for a long time, and there were going to be leaf and grass issues. People have donated their time to clear the fields, pick the rocks. The fields look nice. They’re going to be great garden fields. So it’s rewarding. It’s just a rewarding feeling,” Chip says.

As was the farmer across the road, Frank Beaulieu, who provided his years of experience as well as some of his farm equipment.

Dixie says she’s grateful but not surprised by all the help Catholic Charities received.

The first crops planted were beets, rutabagas and squash. Root crops were chosen because of the possibility of working with a local company to freeze some of them for future use. Root crops also store well, and the goal is to have them available into the fall and early winter months. Catholic Charities didn’t choose potatoes and broccoli, for which Aroostook County is well-known, because the food bank already receives generous donations of those crops.

If all goes well with the project, Catholic Charities hopes to replicate it in other parts of the state.

“There is other farmland and other farmers or other people who are farm owners that I’m sure have land available and would be more than happy to see somebody use it for a project like this,” says Dixie.

“We’re looking at this to be a catalyst for this to happen in many other places,” says Jim Pritchard. “There is a lot of land that isn’t used that would probably be very suitable, and we’re just trying to kindle a fire.”

For now, the folks at Catholic Charities are tending to their crops, worrying a bit more about the weather, and hoping that families across The County will soon reap the benefits of the seeds they planted.