Excited to be Catholic!

Shelly Carpenter, the director of faith formation at  St. Thérèse of Lisieux Parish in Sanford, is effusive in her praise of two teenagers she has had the pleasure of getting to know through their involvement in youth ministry.

“They’ve shown me what it is to be a good Catholic,” she says. “I’ve gained a lot in my spirituality by watching them, because they’re excited, and they make me excited.”

“I strive to follow Christ on a daily basis: at work, school, home, everywhere!” says Hannah.

“Life is happier having Christ in your life,” says Jackie. 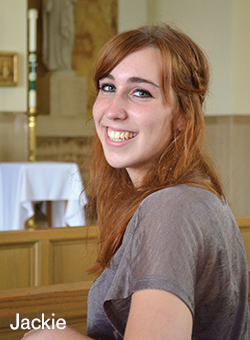 Shelly says whenever she has needed anything, Jackie and Hannah have been right there to help, always with smiles on their faces. They do so much, she says, that “sometimes I’m, like, ‘Guys, you need to cut back a little bit. You don’t need to say yes all the time.’”
Of course, she says, “They don’t listen to me. They say yes, and they keep on giving.”

“I realized that, all those years, I had people teaching me my faith, so I thought I should give back and start teaching other kids, inspiring them to learn and to want to be involved in their faith, as my teachers did for me, and I just enjoy teaching,” says Jackie.

“It was good, almost practice,” says Hannah, who hopes to work in faith formation someday.

Looking for additional ways to serve, Hannah and Jackie also both recently joined the Daughters of Isabella.

“I really like the idea of not just being in youth activities. I like the idea of having people who are wiser than you,” says Hannah. “I just thought it was cool, and they also talk about, at meetings, how they love new input.”

“I really like doing community service and helping people and getting more involved in my church,” says Jackie. “And I thought it would be an even better way to do so.”

And that is saying something since both teens already have a long list of service-oriented community and school activities.

Jackie has taken part in Girl Scouts, Upward Bound, and the March for Life. She has volunteered at the Animal Welfare Society. She has been a peer helper at school and was a member of the Sanford High School chapter of Young Adults Against Dating Abuse (YAADA).

Hannah has participated in Maine Food for Hunger, a program in which you plant vegetables and donate a portion to an area family or the local food bank. She has taken part in the March for Life. She has mentored children at St. Thomas School in Sanford. And she was a member of the National Honor Society and her school’s Civil Rights Club, Key Club, and French Club.

Both Hannah and Jackie credit their parents for setting an example of faith and service.

“It really starts at a young age, just having that foundation of a good, authentic Catholic education,” says Jackie.

Hannah says her parents were always active, so it came naturally to her.

“They’re so involved that whatever they were doing, I was doing. And then I started doing some things on my own.”

She says her mother’s enthusiasm is contagious. “When I was involved in youth ministry, and I would say, ‘Would anyone want to drive?’ My mom was like, ‘Yes, me, me, me!’ Anything she can do, she loves to do, and I love that.”

Hannah says her grandparents also set a wonderful example. She says her grandmother has been in the hospital but still makes prayer shawls for cancer patients.

“There are just so many things she does, that it’s just, like, wow! So, I think they’ve been a huge, motivational push,” says Hannah.

Jackie says there was a time in her life when faith wasn’t a priority, but she says it was still ever present in her home.

“Even when I wasn’t really into it, my parents still instilled it in me because they wanted it in me. They wanted me to be part of it.”

She says she needed a nudge from her dad to get involved in youth ministry but is glad she did.

“Luckily, it ended up helping me grow and become closer to God, because He is amazing,” she says.

Both Hannah and Jackie say of all the clubs and activities in which they have participated, youth ministry is the one that has been most influential.

“I think that was the one that benefited me the most because it helped me grow so much and taught me about myself,” says Jackie.

She says she used to be very shy and didn’t talk much, but the other teens in youth ministry were still very supportive. 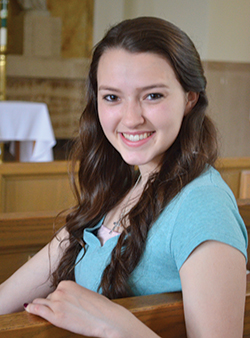 Hannah says, when she was in her freshman year, she saw her older sister, Hillary, a member of the Catholic Youth Leadership Team (CYLT), emcee the annual Youth Convention. It led Hannah to want to do the same.

The teens on the CYLT help plan some of the youth events offered through the Office of Lifelong Faith Formation, something Hannah calls an incredibly valuable learning experience.

“CYLT was huge. That’s what really started me thinking, ‘OK, if I can do this on the state level, what can I do in the parish?’ I really enjoyed it.”

So much so that she plans to study theology and catechetics when she attends Ave Maria University in Florida this fall. She would like to work in faith formation someday, something she says she never considered until a friend’s mother suggested it.

“She said, ‘You love youth ministry, and you love the Church. Have you ever considered doing something like that?’ It had never occurred to me. It had never clicked. And she was the person the Holy Spirit chose to tell me.”

Hannah says she was so certain she wanted to attend a Catholic college, she would have waited another year had her applications not been accepted and had she not been able to receive the financial aid she needed.

“I want to be fully immersed in the Catholic community,” she says.

As for Jackie, she plans to attend Johnson & Wales University in Providence, R.I., where she will study to become a social worker.

“I really want to help people, and I feel that’s the best way I can do it.”

She says many of her friends already turn to her for advice.

“They’ll all just talk to me on Facebook, and I’ll find myself talking to three different people, giving advice. I’m thinking, ‘This is really cool. This could be what I’m doing for a living.’”

She says she is also discerning whether she is being called to religious life. The feeling, she says, came to her while she was attending Journey, a Eucharist-centered retreat offered through the Office of Lifelong Faith Formation.

“All of a sudden, at Journey, I felt like I got this calling to be a nun. It was really powerful because I had never received that before. I had been asking God, ‘If you think that I’m ready to do this, just let me know. I’m willing to accept whatever you give me.’ And unexpectedly, during adoration, I got that feeling, and I was so happy.”

Neither Jackie nor Hannah has been shy about sharing her faith. Jackie, for instance, says when friends sleep over they know that it will mean attending weekend Mass with her family.

“I’ve had a couple friends go to church with me, and I know one of them says she likes my church a lot,” says Jackie.

Hannah recalls helping to educate two chemistry classmates about the realities of abortion. “I started talking to them, and the next day, I brought in some paperwork. I printed out stuff from Catholic websites, and I got my Catechism out and everything.”

Hannah says the information seemed impactful, especially for one of the girls who had said she would consider abortion if she became pregnant. “I don’t know when that information might hit her and come back. It was just a little seed. Like my mother says, you just drop little seeds, and you let God do the watering.”

Both Hannah and Jackie plan to continue scattering seeds as they move on to college.

“I’m completely open to letting the Holy Spirit do whatever He wants,” says Hannah.“I do want to be that light.”

Shelly has no doubts that these teens will continue to shine.

“I know going forward they’re going to be successful,” she says. “They’re just wonderful people whom God has touched.” 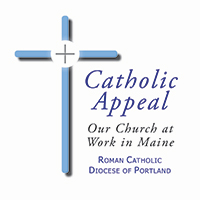 The Office of Lifelong Faith Formation and diocesan youth ministry are supported through your generous donations to the annual Catholic Appeal. If you have not yet given and would like to, you may:

Please make your check payable to the Roman Catholic Bishop of Portland and be sure to include the name of your parish and the city or town where it’s located.