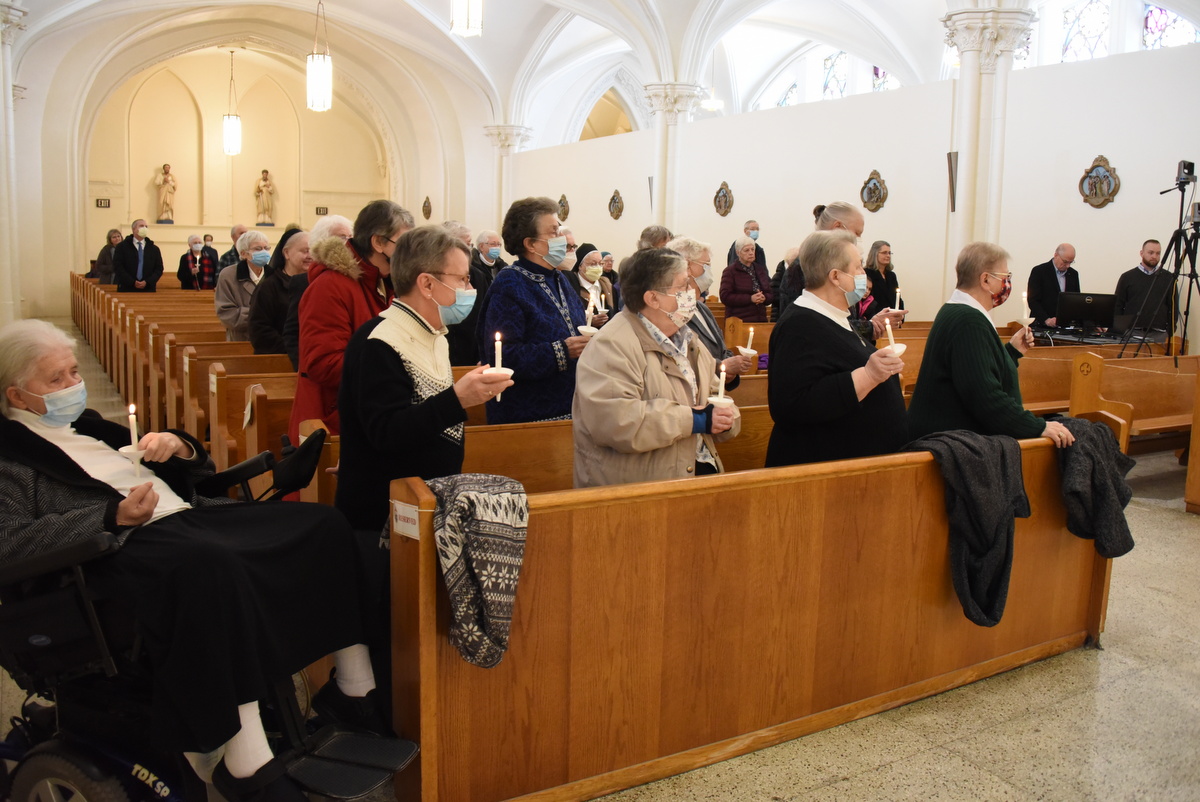 A celebration of the World Day of Prayer for Consecrated Life brought together members of religious communities and secular institutes from across the Diocese of Portland on Wednesday, February 2, at the Basilica of Ss. Peter & Paul in Lewiston. Members of eight different religious communities were present for the celebration, as well as members of secular institutes. Others participated via livestream.

Instituted by St. John Paul II in 1997, the World Day of Prayer for Consecrated Life is an opportunity to celebrate and pray for consecrated men and women and to thank them for dedicating their lives to serving God and his people.

“This celebration is an incredible opportunity to thank all of you for your witness and all you have shared with us, the people of God in Maine and throughout the world,” said Elizabeth Keene, vice president of mission integration for St. Mary’s Health System in Lewiston. “You reflect the light of Christ to us. You have formed us and shaped us, whether it is through service to the poor, through education, through healthcare, or though many other ministries in which you have served.”

“We have come here today to pray together in thanksgiving for God’s call to each one of us to live the Gospel. We come to express our gratitude to a God who is always there, calling us to serve his people, his Church, calling us beyond our own limitations to be witnesses to his presence, to be instruments of God’s love and compassion as individuals and as communities,” said Sister Jacqueline (Jackie) Provencher, OP, a member of the Dominican Sisters of the Roman Union.

The celebration at the basilica was presented by Prince of Peace Parish in Lewiston and St. Mary’s Health System, which was founded by the Sisters of Charity of Ste. Hyacinthe.

The celebration, which included Mass and a luncheon, began with witness talks from some of the sisters. 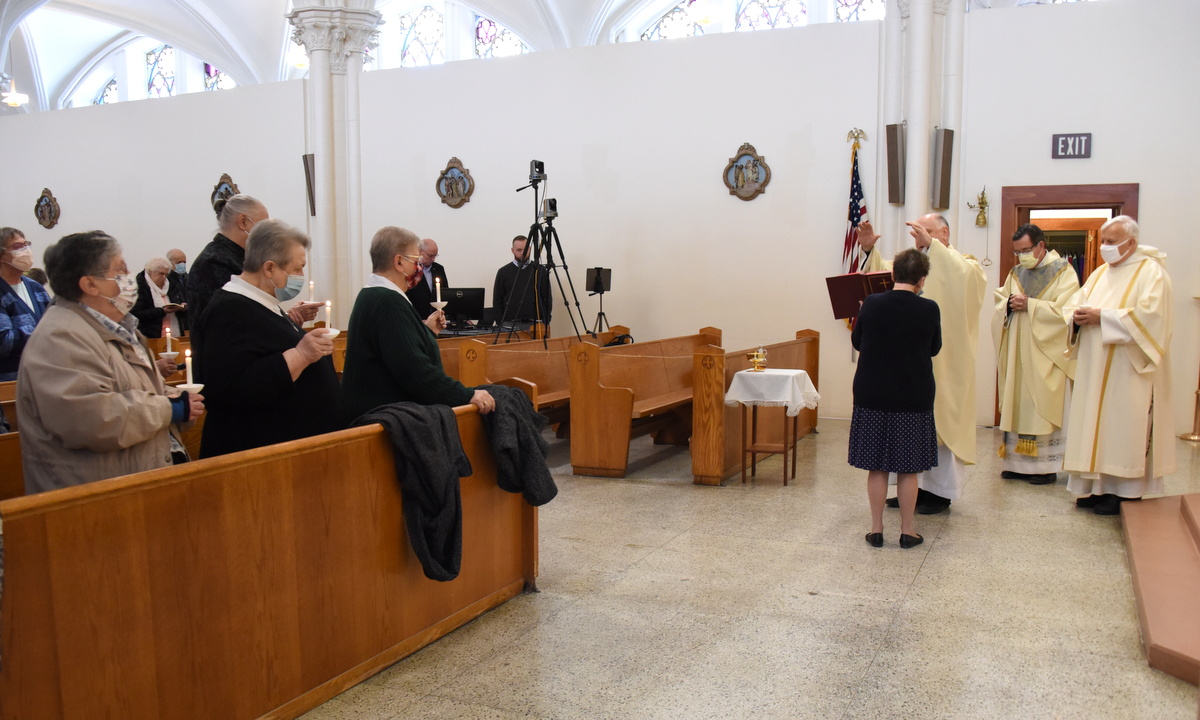 Speaking to those gathered, Sister Jackie said that early in her discernment, she remembers giving herself credit for making a good choice by joining the Dominican sisters, only to come to the realization during one Holy Week that it wasn’t her doing at all.

“We were studying Jesus’ last discourse in the Gospel of John. The verse that struck me was 15:16 — ‘It was not you who chose me, but I who chose you and appointed you to go and bear fruit that will remain so that whatever you ask the Father in my name, he may give you.’ These words struck me and stay with me until this day,” she said. “These words, even today, help me realize that I’m never alone in my Dominican journey, no matter what happens, because, somehow, God is part of the picture.”

Sister Jackie said her vocation called her to do things she would have never dreamed of doing, including serving in Asia, Europe, and South America.

“Some experiences in my life were difficult, some even painful, but many brought success and joy. All of them were worthwhile and meaningful because it was in God’s hands. God was calling,” she said.

Sister Jeanne Roberge, a member of the Sisters of the Presentation of Mary, called her vocation a true gift from God.

“I find that giving my life to God and God’s people is the greatest journey of faith, hope, and joyful love I have ever experienced, even beyond all I could have ever dreamed possible. For me, living my consecration has been and continues to be a challenge to an even deeper relationship with God through prayer and through the daily ups and downs of life’s realities,” she said. 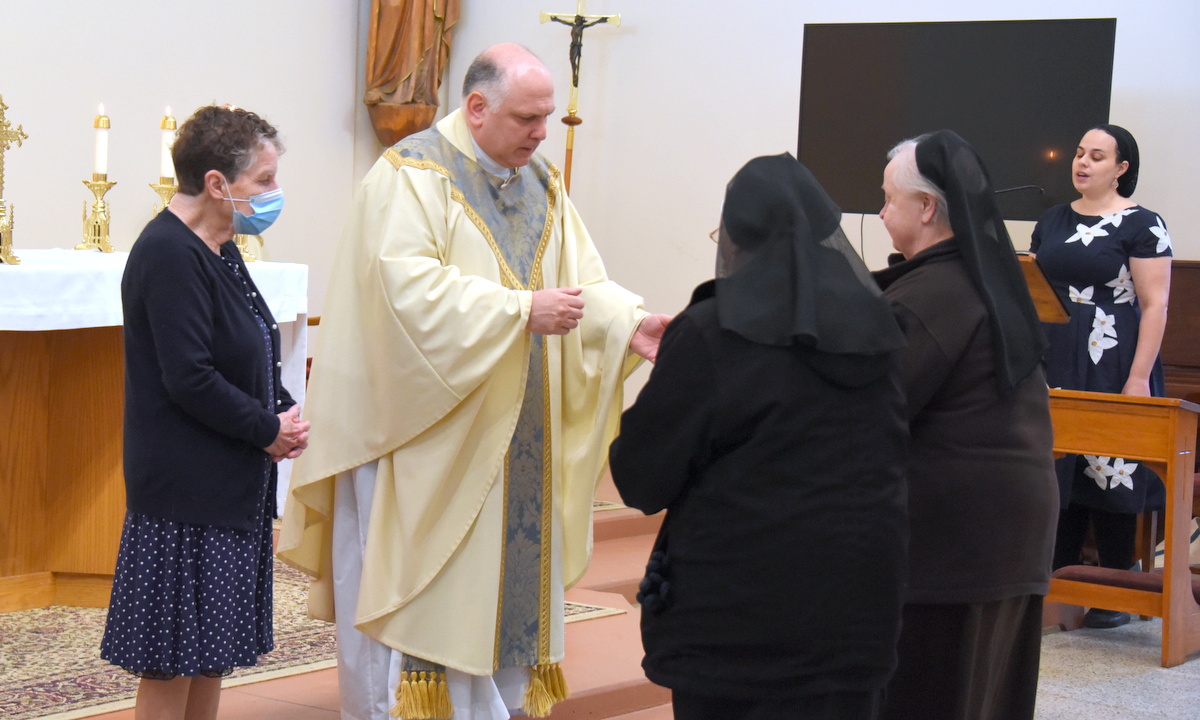 The World Day of Prayer for Consecrated Life coincides with the Feast of the Presentation of the Lord, a day also known as Candlemas because it is the day on which the Church traditionally blesses candles. During the Mass, those in consecrated life were presented with candles which were then blessed by Father Greenleaf.

In his homily, Father Greenleaf spoke of the influence women religious had in his life, going back to the Servants of the Immaculate Heart of Mary and the Sisters of the Presentation of Mary, who were his elementary and high school teachers, respectively.

“There is no question in my mind that I would not be here if it were not for the witness of the women religious who opened my heart to the Gospel,” he said. “They remain all in my heart.”

While noting the many ways in which those in consecrated life serve, Father Greenleaf said it can be hard to know the full impact that their lives have had on others.

“Only God knows the work that you have done, the extent of it,” he said. “So, I guess that the heart of our celebration of the World Day of Prayer for Consecrated Life is not so much your yes to God or the work that you chose to do in this life, but the work you allowed God to do through you. The more and more we become the vessels and the instruments, the tools in the hand of God, I think the more that people see this invisible God made visible.”

For more information about discerning a vocation, visit the Diocese of Portland’s Office of Vocations website.