The Canonizations of "Two Men of Courage" 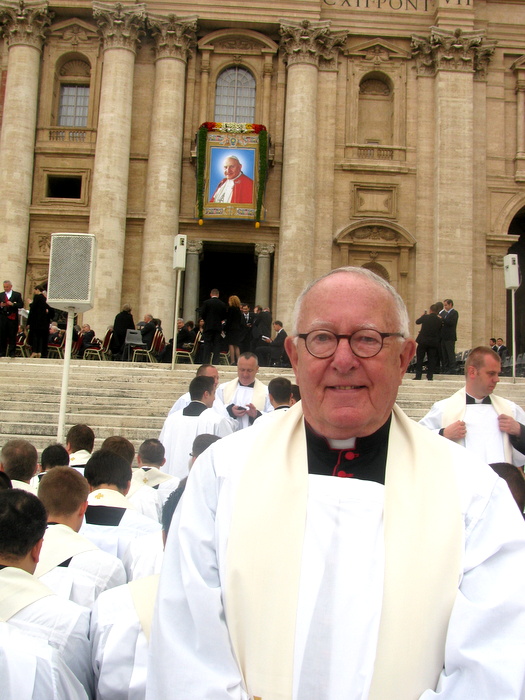 On Sunday April 27, Pope Francis proclaimed two popes saints in the presence of another pope, Benedict XVI—two historic firsts.  My role in the ceremony was Communion distributor. There were 800 of us priests carrying out this ministry that day, and I was by far the oldest among them.

I had special personal reasons for being there.  As a seminarian in Rome, I witnessed the election of Angelo Giuseppe Roncalli as Pope John XXIII and his coronation on November 4, 1958. I participated in Pope John’s visit to our seminary, the Pontifical North American College, on October 11, 1959.

Pope John Paul’s visit took an unusual turn when he decided to step onto the elevator and visit the rooms of the seminarians.  For the first time, on this occasion, he gave a homily in English, having been coached by his Irish priest secretary.

Pope John Paul II’s visit lasted four hours. It began by my asking him to plant, on our grounds, a California sequoia, a more fitting memorial than a marble plaque for this young and athletic pope.  When he departed at 10 p.m., he turned and said to me, “Planting that tree was a good idea!”

I did not sleep well the night before the canonization Mass.  There were reports that more than a million people would be converging, with busloads arriving daily from Poland and Bergamo, Pope John’s home diocese in northern Italy. No tickets were being issued; people were sleeping in the streets to get a good place. How could I get from the North American College to St. Peter’s Basilica, I worried.  The weather report was bad for the outdoors ceremony: 80% chance of rain.

I decided to exit the seminary from a rarely used back gate and walk down a blocked street toward the basilica.  Friendly police created space to penetrate the crowds.  I arrived safely in the Blessed Sacrament Chapel of St. Peter’s, the location designated for the Communion ministers to gather.  Ominous black clouds were in the sky; a few rain drops came down, but as the morning unfolded, the sun appeared.

Those quiet moments in the closed, darkened basilica were the most precious for me that day. A few cardinals were praying at the nearby tombs of the two popes, and I was able to savor this special moment.

But then someone tapped me on the shoulder and said the gathering spot had been changed. The Blessed Sacrament Chapel was too small for such a large group.  We were to go across to the Pope Paul VI audience hall to receive our vestments and instructions. 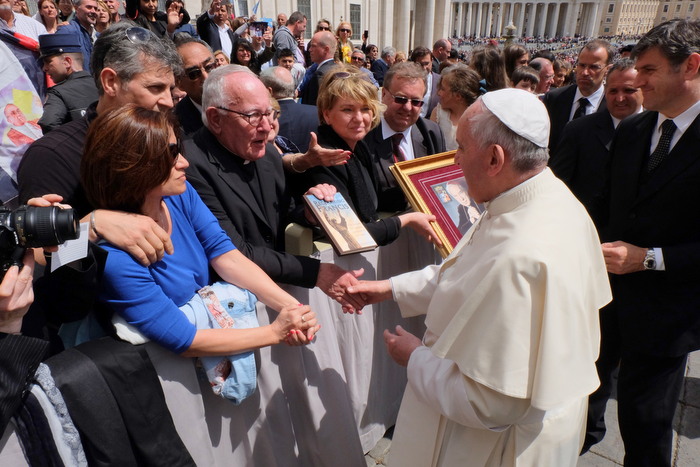 Pope Francis chose to make his entrance behind the altar from the front doors of St. Peter’s. The crowds were instructed to make no applause, not even to wave their banners; they were to join in the chanting of the Litany of the Saints.  The prayerful atmosphere was thus in place for the Mass which was simple and brief, just under two hours.

In his homily, Pope Francis with eloquent simplicity about the heroic virtues of the two new saints.  Though Saint John XXIII had transformed the papacy into a position of world leadership and summoned the Second Vatican Ecumenical Council, Pope Francis described him only as one who was open and docile to the inspiration of the Holy Spirit.   And as for Saint John Paul II, whose papacy was the second longest in history, twenty-seven years, and who participated in the fall of communism, he was extolled as “the pope who was devoted to the life of the family.” Pope Francis concluded, “They lived through the tragic events of the twentieth century but were not overwhelmed by them. For them, God was more powerful, their faith was stronger—their faith—and Jesus Christ, the redeemer of man.”

Pope Francis clearly saw the appropriateness of canonizing the two popes together for John Paul II’s papacy would have been impossible without the accomplishments of John XXIII.  For over a century prior to Pope John, the popes were self-proclaimed “prisoners of the Vatican” to protest the confiscation of the papal states by the Italian government. John was the first to venture outside the Vatican, making pilgrimages to Assisi and Loreto. This led the way for John Paul to travel the world as pope.  John convoked Vatican II which taught that all Christians -- lay, religious and clergy -- are called to one and the same perfection of holiness. John Paul underlined the point by canonizing more saints than all previous popes combined. Pope John’s social teaching in his landmark encyclicals, “Mater et Magistra” and Pacem in Terris” were built upon by John Paul as he sought to make a greater connection between the Church and the world.

Vatican II called for more collegiality and consultation in church governance. Pope Francis now is setting in place ways to accomplish this. In his own way, Pope Francis also has adopted the pastoral style of Pope John with his easy rapport with all kinds of persons, especially those on the fringes of society.  Pope John, long before Pope Francis did so, had visited people in prison, shocking his entourage by saying, “I feel comfortable with you.  Some of my relatives have been in prison!”

I pushed myself to the limits bringing holy Communion to people in the square and then was directed to proceed down the Via della Conciliazione toward the Tiber to still more of the crowd.  My partner was a young priest professor at the University of Lublin where Pope John Paul himself had taught.  He came to Rome from Poland over the Alps on his motorcycle.

My purpose in coming to Rome for these historic events was fulfilled. I had brought together my past and my present in a glorious fulfillment.

At the audience with Pope Francis the following Wednesday, I presented to him my new book, “Reclaiming Francis. How the Saint and the Pope Are Renewing the Church.” Thus a new phase with a new pope came into being.