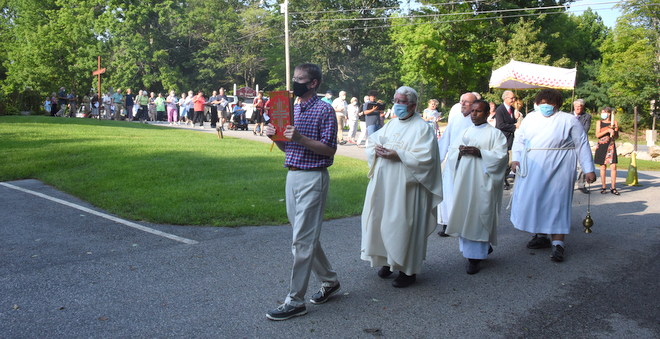 Nearly 200 people gathered with Bishop Robert Deeley at St. Joseph Church in Bridgton on Saturday, August 21, for a Mass and eucharistic procession in celebration of a golden anniversary.

“It is a joy to be with you for this celebration of the 50th anniversary of the dedication of this St. Joseph Church and the establishment of a parish in Bridgton with a mission in Fryeburg,” the bishop said. “Happy anniversary!”

Parishioners filled the pews for the anniversary Mass much like they did back on August 22, 1971, when Bishop Peter Gerety, the eighth bishop of Portland, blessed and dedicated the new church.

The South High Street church was built to serve a Catholic community that started to take root at the beginning of the 20th century and continued to grow. The faithful first gathered in homes and halls with a priest traveling from the town of Norway, when possible, to celebrate Mass. Then, in 1924, the Catholic community bought a former Unitarian church. At first, Mass was only celebrated in the summer months, when Lakes Region vacationers caused the population to swell. Soon, however, it became a year-round church, and before long, it became clear that a new worship site was needed. 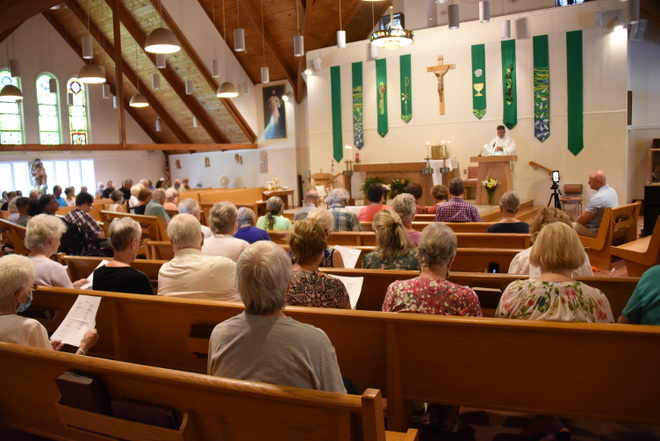 “When we were downtown at the other church, there were so many people that they were out in the streets because there was not enough room in the church. And that’s one of the reasons this church was built,” said Pat McHatton, a long-time parishioner and president of the Women’s Guild.

“I remember the Masses absolutely overflowing outside on a regular basis in the summer,” recalled Elaine Spenciner, who made her first Communion in the former church. “The priest would come to the side door and distribute Communion to people from the outside.”

In 1968, when Father Gilbert Patenaude became pastor of St. Catherine of Sienna Parish in Norway, of which St. Joseph was a mission, he proposed both building a new church and establishing St. Joseph as a separate parish.

“With the appointment of Fr. Gilbert Patenaude as pastor of the parish, this community was given a solidity and an identity. It was the community that needed a Church, a place to gather, a place to learn from Jesus, a place to hear each other, and a place to be renewed in the Eucharist, the sacramental presence of Jesus which brought comfort and strength to the disciples and the crowds that gathered around Jesus and continues to bring comfort and strength to you and I, Jesus’ disciples in our own day. It is the community that gathers in this Church that finds its meaning and its mission in this celebration of the Eucharist. It is the community that is gathered by the Lord Jesus to remember that God is with us. Jesus is the Lord and makes God’s presence and his love available to us,” the bishop said during the anniversary Mass. 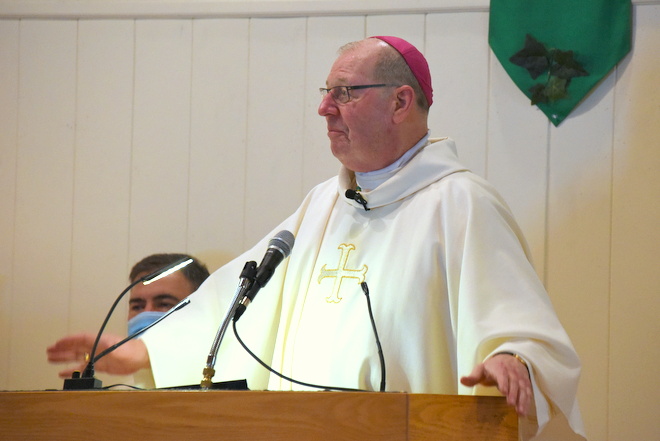 Ground was broken for the new church in the fall of 1970, and thanks to the generosity of parishioners, including the donation of land by Fred and Mary Reynolds of Bridgton, the church opened just two years later. The church was designed by A.C. Pasquale and C.W. Curtis of P & C Allied Architects and Designers of New York City and Southwest Harbor.

Since it's doors first opened, many have come to worship there, describing it as a place of warmth that gives them the feeling of being home.

“Through life’s changes and turmoils, it has always been a safe haven for me. No matter how good or difficult things are, I can always find a feeling of peace there,” said Spenciner.

“It’s just a very friendly parish,” said Bob Pelletier, a member of Knights of Columbus Council 11376, who was helping to direct parishioners as they drove up for the Mass. “You can see me waving at everyone who drives by. I know them all.”

In addition to being a friendly parish, it is an active one, with parishioners involved in the church and in the community. Members of the Knights of Columbus, for instance, work to maintain the church, including helping to keep it clean and safe during the pandemic. The Knights also hold a Tootsie Roll Drive every year to raise money for area agencies that assist those with developmental disabilities, help area seniors with yard work and other household tasks, and support the Mother Seton House in Fryeburg, a non-profit that provides housing, education, counseling, and other support services for pregnant women and new mothers. 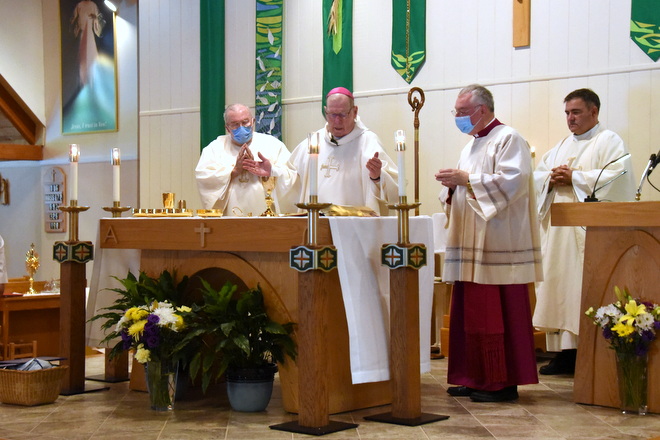 “We’re very, very active. I’ve been in three other councils in my life, and this is undoubtedly the most active I’ve seen,” said Pelletier, who has been a Knight for 35 years.

The Women’s Guild, meanwhile, has been serving the community since before the current church was built. In addition to supporting parish activities, the guild gives out two $2,000 continuing education awards every year. Anyone who is seeking further education, whether it is a high school student going on to college or someone who needs to take a training course for a job, is eligible. 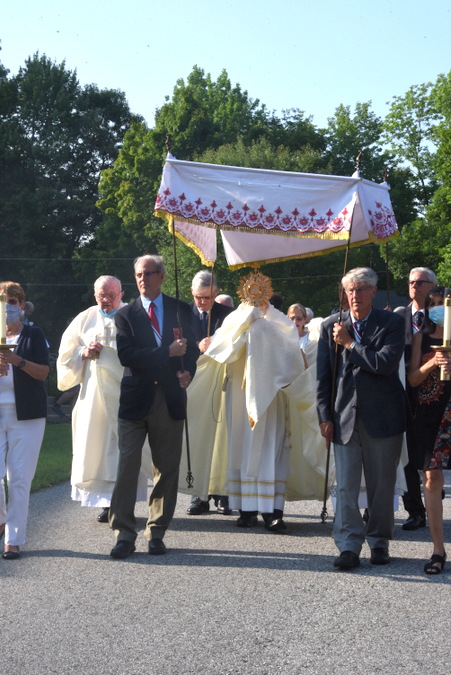 “We all pitch in, and we all wear different hats and keep everything going,” said McHatton.

Members of the Knights and the Women’s Guild, along with Lay Dominicans and Lay Franciscans, were among those who led the eucharistic procession held at the conclusion of the anniversary Mass. Also participating were Father Edward Clifford, the pastor of the parish, Father Arockia Natha Prabu Magimaidass, HGN, the parish's parochial vicar, and Msgr. Paul Stefanko, who formerly served at the parish.

During the procession, Bishop Deeley carried the Blessed Sacrament in a monstrance, while parishioners holding candles followed. They processed to an outdoor altar, where prayers were offered, and then continued around the church, returning to the pews inside.

The parish’s 50th anniversary coincided with the celebration of the Year of St. Joseph, and just prior to the Mass, Father Clifford led the congregation in prayer, concluding a nine-day novena (nine days of prayer) to St. Joseph.

At the conclusion of the Mass and eucharistic procession, there was an outdoor barbecue put on by the Knights.