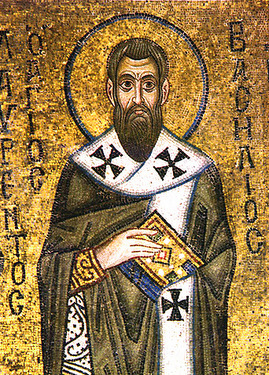 On the ninth day of Christmas, the Church celebrates the memorial of St. Basil the Great and St. Gregory Nazianzen, close friends who became bishops and doctors of the Church.

Born in 329 (or 330) to a wealthy family, St. Basil excelled at his studies, which began under his father and continued under some of the finest teachers in Caesarea (now part of Turkey), as well as in Constantinople and Athens. Although they had been childhood friends, it was while the two were studying in Athens that the friendship between Basil and Gregory Nazianzen strengthened.

Because of his extensive education, Basil was approached about becoming a teacher and, for a while, practiced as a lawyer, but he gave it up because of a call to monastic life. He traveled throughout the East studying monastic life and eventually established his own monastic group on his family’s estate. It is believed to be the first monastery in Asia Minor.   St. Basil invited his friend Gregory to join him there.

St. Basil was ordained a priest and later became the archbishop of Caesarea.

At the time, the Arian heresy, which denied the divinity of Christ, was at its height, with the emperor a strong believer in Arianism.  He tried to convince Basil to remain silent on the issue and to give Communion to the heretics, but Basil refused.  Even when threatened with exile, Basil didn’t give in. When Saint Athanasius died, Basil became the chief defender of the faith against Arianism.

Along with being a great orator and writer, Basil was known for his tireless pastoral care, which included building a hospital.   He lived a life of poverty, using his resources to support those in need. 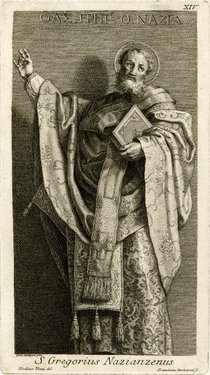 St. Gregory was also born around the year 330.  He was the son of Gregory, Bishop of Nazianzus, who was a convert to Catholicism.   Gregory and Basil were close friends, and Gregory accepted Basil’s invitation to join him at his monastic community.

In 362, Gregory was ordained to the priesthood to assist his father, and then, Basil, who was archbishop at the time, ordained Gregory as bishop of the village of Sasima.  Basil was seeking help in the fight against Arianism, but it was not a desirable appointment, nor one that Gregory wanted. He preferred to stay to help his father.  Gregory never took control of the see, and the incident strained the friends’ relationship.

When Basil died in 379, however, Gregory took up the defense of the faith against Arianism. He was persuaded by fellow bishops to go to Constantinople, where the Arians had taken control of the churches. He was installed as bishop there and began to preach his famous five sermons on the Trinity, which became known as the Triadica. Within two years, the Arians did not have a single church left under their control.

Gregory returned to his homeland where he served as bishop for a short time, but he then retired to his family estate where he died in 389.

Both St. Gregory and St. Basil were known as brilliant thinkers and orators, skills they used in service to the Church. Saint Gregory is often referred to as Gregory the Theologian or the Trinitarian Theologian, because the Trinity was so often at the heart of his sermons and writings.  Both St. Gregory and St. Basil are credited with preserving the faith and helping to develop the theology of the Trinity.