Supporting seniors in need of a lift 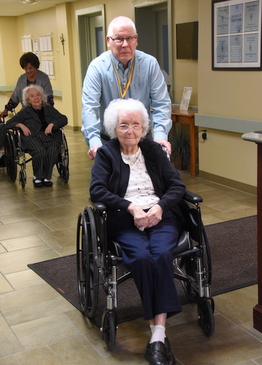 On Sunday mornings, the first-floor hallway of St. André Health Care in Biddeford is a busy place. In wheelchairs, with walkers, or with an arm to lean upon, around 30 residents are making their way to the community room for the celebration of Mass.

Guiding many of them are Bill and Priscilla Heffernan of Arundel. They are among the volunteers and staff members who help Sister Patricia Sullivan, RSM, escort the residents.

“They want Sunday morning Mass because that’s what they did as a family, but there is no way I could do this by myself,” says Sister Patricia, the head of mission integration and spiritual care at the facility. “The days when the volunteers can’t make it, it’s quite the task trying to bring people down.”

“You bring them down and sit with them,” says Priscilla. “If they speak French, I’ll speak French to them, because they understand a little better.”

Sister Patricia says Bill and Priscilla are the most faithful of the volunteers who assist her, always ready with a welcoming smile, always willing to help out where needed, including reading and serving as extraordinary ministers of holy Communion during the Mass.  Priscilla has even served as sacristan on the occasions when Sister Patricia has been away.

“We have to hold each other up and support each other,” says Bill. “That’s why we’re here."

Reflecting back, Bill says he began volunteering around the time his son, Kevin, was born.  Kevin is now 41.  Priscilla has joined him on Sunday mornings for the past eight years.

Bill says he first got involved through a friend, Richard Cook, who he knew through St. André Parish in Biddeford. Richard was one of the first laypeople in the diocese to serve as an extraordinary minister of holy Communion following Vatican II, and he invited Bill to join him.

“So, he put in my name, and it was accepted by the priest. Then, it had to be sent to the diocese for approval,” Bill recalls. 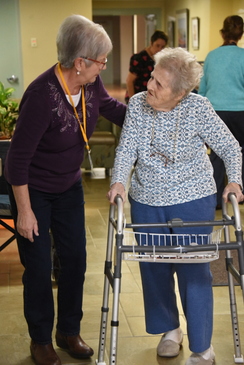 Bill and Richard began by bringing Communion to the homebound on Monday evenings after they got out of work. Bill says they did that for at least five years before transitioning to the Renaissance, a nursing home in Biddeford.

“First, we started doing homes, individual homes. Then, the priest said there were some people who need it at the nursing home, so for a while, we were doing both,” he says. “It takes a lot of time though, so we stopped doing the homes, and we started spending more time at the Renaissance.”

Richard passed away in 2018, but Bill continued on, joined by Priscilla. She had begun regularly going to St. André to visit a priest she knew from her years working at the Franciscan Monastery in Kennebunk.

“I would bring him down for Mass, and then, I started helping out, bringing others up when I would visit,” she says.

After the priest died in 2013, she stopped for a short time but then decided it was a ministry she wanted to continue.

“It’s fulfilling. You see these people. You’re with them once a week. It’s kind of part of the family,” she says. 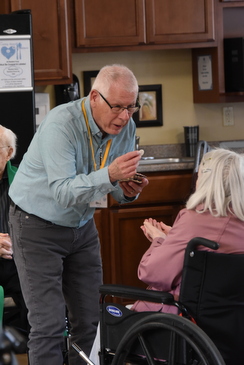 “A lot of them are really lonely. They don’t get visitors,” says Bill. “They enjoy our company, and we enjoy their company. It works both ways.”

In addition to helping out on Sundays, Bill visits every Wednesday.

“I try to go to all the rooms, whether they’re Catholic or not,” he says. “The ones who are Catholic, I’ll say a little prayer with them and give them Communion.”

Bill also leads a rosary group on Wednesday. Approximately 15 residents gather in the day room on the second floor to pray together. He says it’s evident that it’s something the residents look forward to doing.

“He empowers them.  He’ll say, ‘Do you want to say a decade?’” shares Sister Patricia. “It takes a little longer because they forget, and they’re weak, but he waits for them.”

“A lot of them feel hopeless, like, ‘Why am I here?’ or ‘What good am I anymore?’ So, we try to get them involved. It gives them a little lift. You can see the difference in them afterwards,” Bill continues. “There is one lady I’ve known for a long time. I know her, and I know her kids.  She is a very faithful person, and she loved the Rosary. Whenever the Rosary was being prayed, she would be there. Now, she is here. She has dementia, but she still comes to say the Rosary. I put a rosary in her hand. It may seem like she’s not involved too much, but when we sing the ‘Ave,’ you can see her trying to sing.” 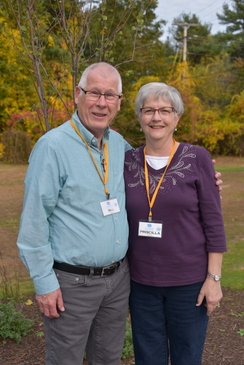 “In between the decades, Bill sings the ‘Ave’ with them,” adds Sister Patricia. “Some of them have difficulty speaking, but they’ll sing that ‘Ave.’”

Bill says he has volunteered these many years because he knows faith remains important to many of the residents.

“Even though they’re in their conditions, mentally or physically, they’re still praying. They’re still faithful. That’s what it said in the Gospel today: keep praying. Never give up. And they don’t. It’s amazing.”

He says it is uplifting to spend time with them.

“You come in here, and you see their faith, all these years. Some of the people I knew before they came here. I say, ‘Wow. They’re still faithful. They’re still praying after all they’ve been through.’ That gives me a boost in my faith, too. Hopefully, I can keep going the same way when I’m older,” he says. “To me, it’s like being among saints. These people are all saints.”