Saint John of the Cross 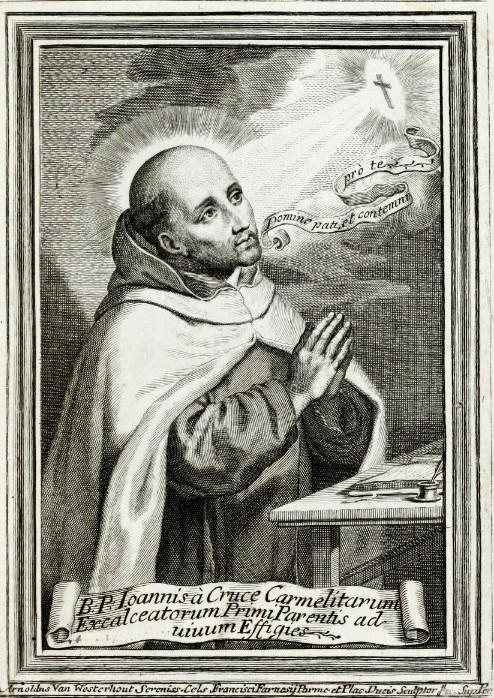 Saint John of the Cross

Born Juan de Yepes y Álvarez in Fontiversos, Spain, in 1542, Saint John of the Cross was the son of a poor family, whose father died when he only about three years old, followed by an older brother two years later.  In search of work, his mother took him and his other brother to Arévalo and then to Medina del Campo, where he was placed in a boarding school for poor, mostly orphaned children. There, he received a Christian-based education, while also becoming an altar server at a monastery of Augustinian nuns.

He worked at a hospital and studied the humanities at a Jesuit school before choosing to enter the Carmelite Order, taking the name John of St. Matthias. Following additional studies, he was ordained to the priesthood in 1567.

John was considering entering the strict Carthusian Order, drawn by its silent, contemplative lifestyle, but then he happened to meet Teresa of Avila, who was in Medina to found a new convent.  She told him about her efforts to reform the Carmelite Order, and inspired by her deep devotion to her cause, he decided to join her in her work. In 1568, John, along with another friar, founded a new monastery for Carmelite friars. On the day it opened, he changed his name to John of the Cross.

John eventually became confessor and spiritual advisor to Teresa of Avila and worked closely with her as more communities following her principles were established. Their branch of the Carmelite Order became known as the Discalced Carmelites, a reference to the fact that they chose not to wear shoes.

Unfortunately, the work they were doing did not sit well with some of the existing Carmelites, and in December 1577, John was kidnapped and imprisoned in a small cell of a monastery. He was treated harshly and given little to eat, but his faith didn’t falter, and during this time, he wrote several poems including “The Spiritual Canticle” and “The Dark Night of the Soul.”  For works such as these, he became known as one of Spain’s greatest poets and mystical, spiritual writers.

John escaped about nine months later and rejoined St. Teresa. The two would continue to expand the Discalced Carmelite Order, asking Pope Gregory XIII to formally separate it from the other Carmelites, a request he granted in 1580.

John remained dedicated to the Discacled Carmelite Order following Teresa's death. In 1585,  he was elected vicar provincial of Andalusia, a position that required him to visit the houses of friars and nuns in the region. As he traveled through the area, he established new monasteries.

In 1588, he was elected third councilor to the vicar general for the Discalced Carmelites, but he was removed from the post following a disagreement and was sent to an isolated monastery. There, he fell ill and died in December 1591.

St. John of the Cross is known as the Mystical Doctor of the Church. His writings are still referenced today.

He was beatified by Pope Clement X in 1675 and canonized by Pope Benedict XIII in 1726.