A new day for the Greenville Knights 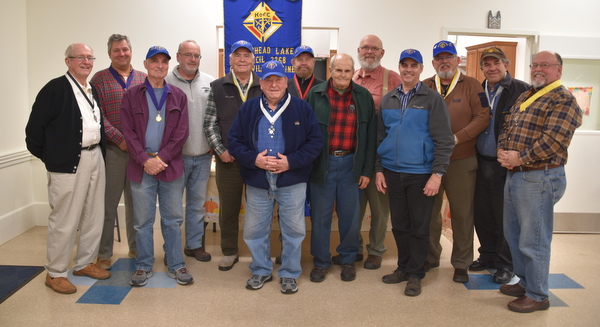 “The coats that we ordered are for kids in grades 2 through 8.”

It is the council’s first year participating in Coats for Kids, a national Knights’ initiative that has resulted in nearly a half million coats being given to children across the United States and Canada in the past decade.

There are a lot of firsts these days for members of this Knights’ council, from participating in Greenville’s Forest Heritage Days to leading Friday Advent adoration at Holy Family Church to hosting the statewide fourth degree ceremony in September.  Of the 32 Maine Knights who earned their Fourth Degree, 11 were from the Greenville-based council.

“I feel like I was led here. There were just too many things happening that just all made it work,” says Paul O’Connor from Beaver Cove. “I thought what better program to have than one with male mentors who are Catholic.”

“The Fourth-Degree program just happened perfectly,” says Dennis Welsh, from Greenville. “I came away with just a much better feeling in my heart about what I was doing.”

The work the Moosehead Lake Council has been doing is impressive, especially when you consider that the council had been dormant for 15 years.  Founded in 1922, membership dwindled through the years, and as it did, so did the Knights’ presence in the community. 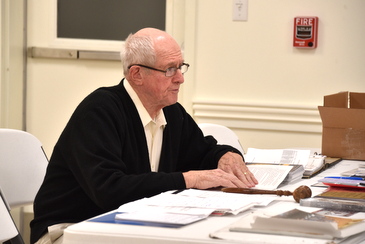 “It just sort of closed up,” says Deacon John Guerin. “They had about six or eight elderly members who paid their dues, but they didn’t have a meeting.”

That changed about three years ago when Father Aaron Damboise, pastor of Holy Family Parish since July 2015, approached Deacon Guerin about getting the council going again.  Deacon Guerin has been a Knight since his college days in 1964.

“Father Aaron was the chief instigator,” says Deacon Guerin, laughing. “He said to me, ‘John, you’re a Knight. Would you like to help me get it started?’”

Deacon Guerin says the response he received was positive from the start.

“I started asking the guys around here, and all of a sudden, one guy said, ‘Yeah, I’ll join.’ Then another guy said, ‘I’ll join,’” he says.

While Deacon Guerin downplays his role, those he invited see it differently.

“Deacon John took time to pull out all the old literature, certificates that were framed, and scrapbooks, and he just showed us how vibrant, at one time, the council was. It was pretty neat,” says Joe DiAngelo, the Grand Knight.

“I said yes because John is a really compelling guy and because I understood the nature of what being a Knight was going to be.  I looked forward to joining a group of men,” says Chris LeConte, now a fourth-degree Knight. “As you can see, it turned out to be a good choice.” 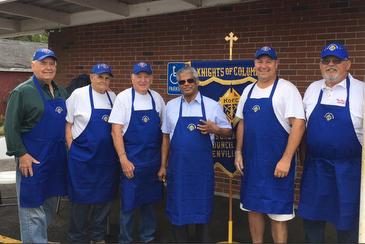 “One day, you wake up and you say, ‘Gee, is this where my faith needs to be? Am I walking my faith? Am I talking my faith?’” says Welsh. “It was self-realization and being pushed a little bit, and I’m certainly glad I did.”

“It just felt like the right thing to do,” says John Morrell. “I am a new Catholic, only about eight years, so I thought, this fits with how I want to live. I like being in a civic organization. It’s a big part of what I want to do. This is an extension of being Catholic, of loving my family and taking care of people.”

Many of the men who became Knights, including Morrell, were involved in efforts to build the new Holy Family Church, needed because the former church had structural problems and was not easily accessible. The new church was dedicated in 2018.

“It was just kind of a wave that was going on,” says DiAngelo. “It was all part of the process with the new church and all the good things that were happening.”

Seeing the council come back to life has been particularly special for Knights like Ivon Turmel, who has been a member of the council for 57 years.

“It’s beautiful to see it come back. I thank Deacon John and all the boys here,” he says. “This is a very good council. They are good workers. Everybody contributes.”

For its achievements, the Moosehead Lake Council received the Star Council Award, which recognizes outstanding achievement in membership, participation in the Knights’ insurance program, and service. 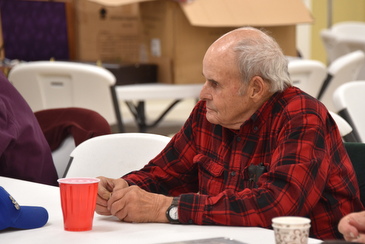 The council has 25 active members, 17 of whom are fourth-degree Knights. DiAngelo says he wants to be cautious not to overwhelm the group with too many projects, especially since some reside in neighboring communities such as Rockwood, more than a half hour away.  He is also well aware that in the Moosehead Lake Region, winter weather arrives early and departs slowly, making travel difficult.

Despite that, the members’ enthusiasm, energy, and desire to serve often win out.

“This is the little church that could, so that same attitude has worn over into the Knights,” says Morrell.

“Anytime something comes up, we volunteer,” says Deacon Guerin. “Sometimes, Nilsa, my wife, says to me, ‘John, don’t you ever say no?’ The answer is no. When you see a poor family who needs help, you want to be part of the group that is helping the family. If we don’t help people in our community, life isn’t worth living.”

The Knights winterized the homes of elderly residents. They shovel out the church doors and rectory stairs.  They help clean the church and help prepare meals for faith formation gatherings. They also hold community events such as a free throw shooting contest and Trunk-or-Treat, which brought 100 children and their families to the church.

“We were looking at each other saying, ‘This is really cool,’” says DiAngelo, recalling how it gave some children of the parish a chance to show their friends the church. “They were proud as peacocks with all those other kids around. It sounds minor, but you could see their pride that they were members of our parish.” 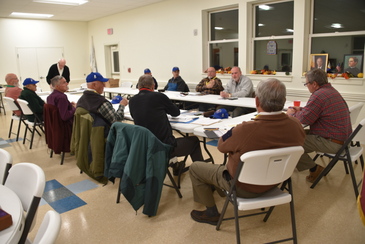 “Faith is much bigger than just going to church. It’s about how we treat each other and what we do for each other,” says Welsh.

“I think the value for me is serving, giving back, especially to our church,” says DiAngelo. “My faith is more important to me all the time. Like everything else, it’s growing old in me.  I feel that calling more than I feel anything else right now.”

“This is not a big church in Portland or Augusta or Lewiston. This is Rockwood-Greenville, Maine, and 25 guys who are doing what we can to serve our community and parish and to support Father in his endeavors,” says LeConte.

“The power of the Knights of Columbus is that Father Aaron has a group of men behind him, so if he needs help, he’s not alone,” says Deacon Guerin.

“It’s exciting to step back and to be able to go, ‘We have all this to offer,’” says O’Connor. “I think it gives the community purpose and hope.”

Deacon Guerin calls the Knights a brotherhood. He says when he thinks about the Knights, the image that comes to mind is of a long ago Christmas stamp from Father Flanagan’s Boys Town in Nebraska.

“The image was of a young boy carrying another youngster on his back, piggyback style, with the words, ‘He ain’t heavy, Father; he’s my brother.’ That’s how I feel about the Knights. We are truly brothers and would help another instantly if one needed help,” says Deacon Guerin. “That is the reason we are so successful, along with having a good prayer life and going to Mass.”