Meditation garden pays tribute to lives lost in the pandemic 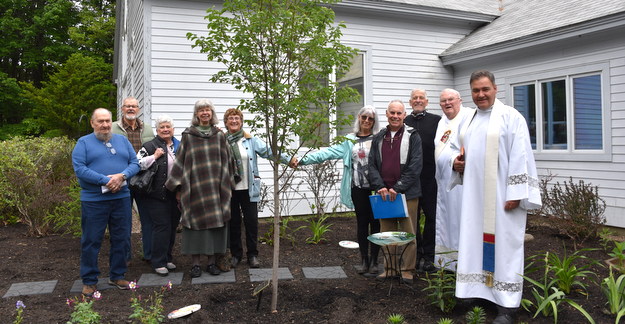 “May God bless this tree and this garden and all those who will venture upon it. May their minds and hearts be full of love of you and each other.”

“Grant that, in obedience to your law and will, your faithful may always use created things in a spirit of gratitude,” Father Clifford prayed.

The tree and garden are the work of the newly reconstituted Parish Social Justice and Peace Commission at St. Joseph Parish, which includes St. Elizabeth Ann Seton Church. As a small plaque at the base of the tree reads, it was planted in loving memory of all lives lost in the COVID-19 pandemic.

“There has been a lot of grief involved in that, so we wanted to commemorate that,” says Ed Stevens, who chairs the commission along with his wife, Kathleen. 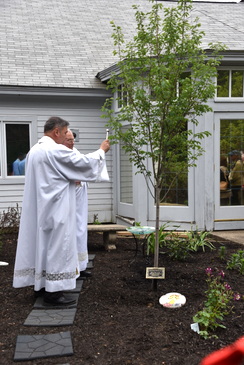 “The tree, to me, represents life and unity, trying to bring us back together,” says Kathleen. “It’s been a very divisive time.”

“It will be a loving tribute to those who died during this time and of our appreciation for creation our Lord has given us,” says Father Clifford.

The need to protect the environment was a cause members of the Parish Social Justice and Peace Commission say they felt called to embrace, which is why they wanted their initial project to involve care for our common home.

“There is a great need for awareness of environmental needs in our community,” says Sally Chappel, a commission member. “I’ve been interested in environmental functions for many, many years.”

Members of the commission have been studying Pope Francis’ encyclicals Laudato Sí and Fratelli Tutti, as well as the teachings of the Catholic Climate Covenant, which was established by the U.S. bishops in 2006 to raise awareness of Catholic social teaching on the environment.

“It kept directing us towards restoration of the earth as one of our goals,” says Ed. “We thought about trying to do some teaching on the ecology and recycling, and then, somebody came up with the idea of planting a tree.”

“They talked about planting a tree and all the benefits to the earth and the air and to our environment. So, we just put it out there, and then, this friend of ours, who is on the commission, too, she just took off with it,” says Kathleen. 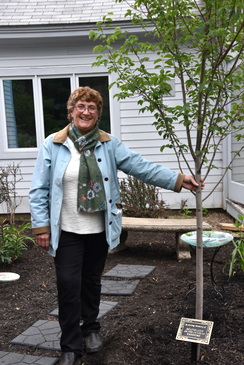 That friend is Sue Belmer, who has been doing landscaping work for decades.

“I jumped at the idea of planting a tree. I thought it was fabulous,” she says.

The commission originally planned on planting two trees this year, one at St. Elizabeth Ann Seton and the other at St. Joseph Church in Bridgton, the other church in the parish, but members decided to do one this year and the other in 2022. That turned out to be a wise choice because work on the project was more extensive than originally anticipated, something that did not come as a surprise to Sue.

“I know from my history that whenever you do something, there is always more involved. There is no expectation that it’s going to go smoothly,” she says.

Sue says the spot near the narthex that was chosen for the tree was quite overgrown.

“We’re talking 20 to 25 years ago since these beds were put in,” she says. “When Kathleen and Ed and I got there the first day, we were like, ‘Holy moly!’”

And so, hours and hours of work began.

“We transplanted a bunch of shrubs. We put them all around the perimeter.  I found this beautiful wooden edge border that was underground, so we pried that up. Then, these beautiful edge pavers, they were all under the ground also,” Sue says. “We have these beautiful azaleas, but they were touching the building, and you couldn’t even open the windows at the side of the church.” 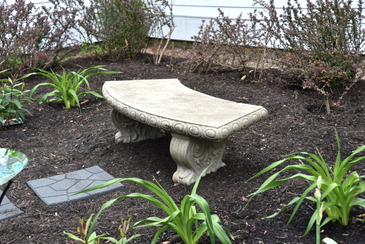 “We also installed a bench. Actually, we repurposed an old concrete bench that was covered with undergrowth in another part of the church grounds,” says Ed.

After more than 50 hours of work, the help of two Fryeburg Academy students, seven truckloads of brush taken to the dump, and mulch and soil donated by Home Depot, the area was transformed.  The tree, the centerpiece of the garden, was planted on May 10 with the assistance of parishioner Ken Harrold and his backhoe.

A Robin Hill Serviceberry tree was chosen because it is indigenous to Maine and because it will only grow to about 12 feet high. The name also seemed appropriate.

“It’s a four-season tree,” says Kathleen. “It has early pink blooms, and it has juneberries. The birds love to nibble those berries, and the berries are also edible for humans and for making jams.”

“In fall, it’s brilliant with brilliant colors. Then, in winter, it’s pretty with its silvery smooth bark. I thought it was a great pick,” says Sue.

Surrounding the tree are various perennials with names that reflect the spiritual and meditative nature of the garden.

“I was just researching perennials and came up with those with names like Jacob’s ladder, heaven scent, and some phlox that was blue paradise. There are ten perennials that will go around the tree. They’ll come back year after year,” says Sue.

The garden also features a birdbath and windchimes with a Holy Spirit dove, which parishioner Boyd Smith made out of repurposed materials.

“The circle of life is an old barrel stave that I cut down. The Holy Spirit is plexiglass. We have a fishing lure swivel, and then, the bells are the angels,” says Boyd.

Parishioners gathered for a dedication ceremony on Memorial Day weekend. 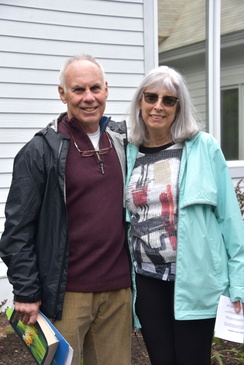 “We invite everyone to visit often this garden of peace, this habitat of tranquility, to be inspired by and to enjoy the music of creation, the birds and breezes, and to listen to the quite voice of the Holy Spirit calling us all to a greater devotion, love, and respect for all of God’s gifts,” Ed told those gathered. “We encourage you to dwell on the diversity of God’s creation and to see joy, understanding, non-violence, and peace in all things.”

The parish applied to the Saint Kateri Conservation Center and had the garden declared a Saint Kateri Habitat, a program that was established to inspire Catholics to restore gardens and yards. To be declared a habitat, an area must meet at least three of six criteria and include a religious element, which the garden does because it includes a native tree, water, a space for prayer and contemplation, and a sacred element.

While the environment will continue to be a priority for the Social Justice and Peace Commission, it is by no means the only issue members plan to address. The commission plans to build upon ministries already offered or supported by the parish, such as a monthly food pantry, a Christmas giving tree, and the Mother Seton House, which serves pregnant women and mothers who have recently given birth. The parish also has active Knights of Columbus and women’s councils.

“Jesus has called us to serve each other especially the poor and vulnerable. The Social Justice and Peace Commission will help identify and create opportunities for people in the pews to participate in the call to serve others,” says Father Clifford. 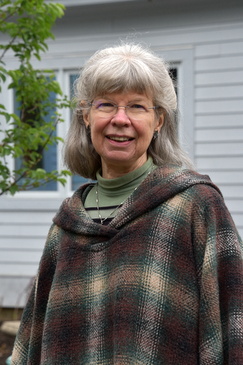 “We want to go to the root causes of things: why people need the food pantry, why they can’t buy presents for their children at Christmas, things like that,” says Sally.

Enhancing or creating commissions to help the parish fulfill its mission was among the needs identified when it developed its priorities plan.

“That helped us to kind of organize and visualize and see the structure of the whole parish in terms of what the parish mission is and what we offer to the community, says Ed.

Ed and Kathleen say they immediately felt drawn to the Social Justice and Peace Commission and credit Bill Wood, a parish outreach specialist with Catholic Charities Maine, for helping them get it off the ground.

Ed says, even beyond the new garden, it has already been a rewarding experience.

“It really expanded out connection with other folks in the parish and throughout the diocese,” says Ed. “What it’s done for Kathy and I is to really deepen our commitment to the Church.”