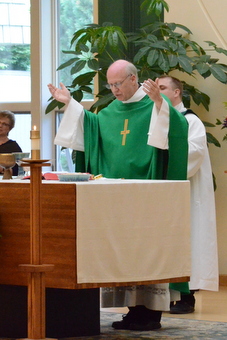 The ancient Romans persecuted Christians for many reasons.  Some those reasons were based on misunderstandings of what Christians were all about.  One of those misunderstandings has to do with the Eucharist.  Romans heard rumors about eating a man's body and drinking his blood, and they quite understandably thought this might be cannibalism.  The charge sounds outrageous to you and to me, but you have to admit, it is not hard to see how someone could get that impression.

I used to interview all the children making first Communion in the parish.  I no longer do that because I now have three parishes and many more children.  In those interviews, I was always very careful about how I spoke about the real presence of Christ in the Eucharist.  Children can be very literal-minded and talking about drinking someone's blood (even that of Christ) could be confusing, if not downright distressing.

I am also rather uncomfortable with what are sometimes referred to as the Eucharistic miracles often dating back to the Middle Ages.  Stories of these miracles speak about hosts that began to bleed or hosts that appeared to turn into a mass of living flesh.  The faithful are not bound to believe in these things.  Every Christian is free to make up his or her own mind.  No Christian, indeed, is ever required to believe in any private revelation, even when that private revelation (such as those of Fatima or Lourdes) is approved by the Church.  I realize that some Catholics may find such reports helpful to their faith and that is wonderful.   But for me (and you can certainly disagree) the stories of these Eucharistic miracles distract from the full meaning of the Eucharist rather than advancing true devotion.  Maybe it is just me?

So, while I absolutely believe that the bread becomes His Body and the wine becomes His Blood, I sometimes prefer to speak of Christ giving Himself to us in the Eucharist; Christ entering into Communion with us.  Maybe I am wrong, but I think that is sometimes more helpful and more clear.  And, I think that makes it easier to speak of the presence of Christ in the Eucharist rather than leaving open the possibility of misunderstanding.