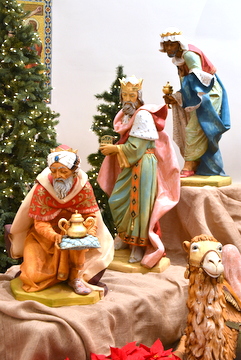 The Epiphany: A gift for all of us

When I was a seminarian, I had the opportunity to visit a seminarian friend in his native Puerto Rico.  We went on a retreat and got to visit with his family.  We went during January 2015, and we were able to attend Mass in Bayamón, Puerto Rico, for the Feast of the Epiphany, Three Kings Day.

At this special Mass, there were three little boys dressed up as the three kings.  They were part of the procession, dressed in robes with homemade crowns and long-flowing beards covering their young faces.  Throughout the Mass, they often looked out curiously at the congregation.  Then, after the Mass, they passed out presents to the children.

The Epiphany recognizes the great gift of God’s special revelation to us.  He came to us in the flesh to be among us.  The Magi brought gifts of gold, frankincense, and myrrh to Jesus.  Yet, Jesus gave us the gift of His very self.  Jesus revealed Himself humbly to the Magi.

The Epiphany is a very special day in many cultures.  In explaining the significance of the day, John, my seminarian friend, told me it is because it was Jesus being made known to the Gentiles.  It is true that many of us have European, African, Asian, or Latin American roots, yet, Jesus came for us all.

This is an important time of the Church year.  We see Christmas specials on TV and hear Christmas songs on the radio for months leading up to December 25t.  Yet, on Christmas afternoon, all of that goes away rather abruptly.  In reality, the Christmas season has really just begun.  Christ gave Himself and gives Himself completely to us.  As Christians, we try to give of ourselves lovingly as well.  This is a time to recognize God’s revelation.  Let us soak this in and get to know Him.

God is truly with us.