Raising a family in faith 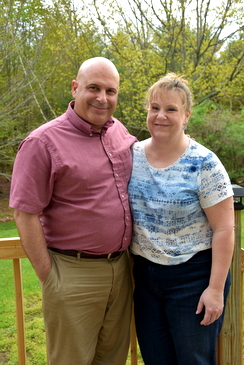 Ask Michele Guillemette of Waterboro what it takes to raise a family in the Catholic faith in today’s world and that is what she will tell you.  But, she will also say there is no more valuable gift you can give to your children.

“Life is hard, and it’s even harder when you don’t have your faith,” Michele says. “Being a mom, you don’t want to see your children struggle any more than they have to. I want them to know God will always be there for them.”

Michele and her husband, Bob, say they sought to guide their children by teaching them about the Catholic faith, by making God part of their everyday family life, and by trying to witness Christian values. They say they relied on God to show them the way.

“There was going to be no other way, and we wanted it to be that way,” says Michele.

The Guillemettes have four children, Joshua, Jacob, Thomas, and Theresa.  From the oldest to the youngest, each will tell you how much their faith means to them, while crediting their parents for pointing the way to Christ.

“Both my mom and dad led by example in their own faith life, teaching me and my brothers and sister how to pray, teaching us how to give everything completely to God,” says Joshua, age 20.  “They’re always reassuring me that if you completely put it into God’s hands and give up that part of your life to Him, things are going to go well.”

“I’m very grateful because, especially in times of hardship, and there is a lot, especially during high school, I always have someone other than my family to turn to, and that is God. He’ll always be there no matter what,” says Jacob, age 18. “The more you include Him, the more He will be in your life, and the closer to Him you’ll get.”

“Without faith, we really wouldn’t have a sense of being,” says Thomas, age 17. “I honestly couldn’t tell you what I would do without it.”

“Other kids, they wake up in the morning, and they don’t have the possibility to just open their minds to God and have God speak to them,” says Theresa, age 11. “I talk with God throughout the day.” 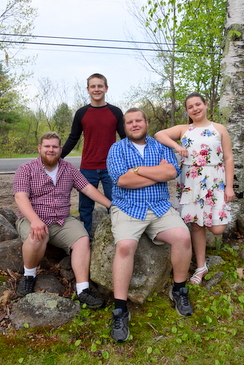 The four siblings are all active in their faith and in service to others. Joshua is a seminarian, discerning a call to the priesthood. He and Jacob both served on the Catholic Youth Leadership Team (CYLT), which plans diocesan youth events, and both have been honored with St. Timothy Awards, presented to youths who display Christian leadership and demonstrate Gospel values through service to others. Thomas recently became a CYLT member, and Theresa aspires to do the same someday.

The Guillemettes say their drive to raise their children in the Catholic faith began the day Joshua was born, but they say it also came after they experienced a rebirth in their own faith lives.

Although both were raised Catholic, Michele says her family didn’t regularly attend Mass, while Bob says his faith life included Mass and religious education but didn’t go deeper.  After getting married, they say they drifted from the faith, but when Michele faced back surgery which was potentially life-altering, she turned to prayer.

“It scared me, and that’s when the conversation with God really started,” she says.

Bob and Michele say they were also fortunate to have Father Richard Rice serving as pastor of their parish at the time.

“Father Rice is the one who really brought my faith alive,” says Michele.

“The big thing is that he listened,” says Bob. “You could feel how much he loved the priesthood and, then, how deeply he cared about his parishioners. That’s, I think, what really ignited us.”

With their faith on fire, they wanted to give their children the connection to God they didn’t have when they were young.

“We had talked about how much we really wanted our kids to know God and for Him to be part of their lives every day, not just Sundays going to church or holy days but every day, every part of your day,” says Michele.

Although money was tight with them both working, the first difficult decision they made was to have one of them stay home to raise their children. 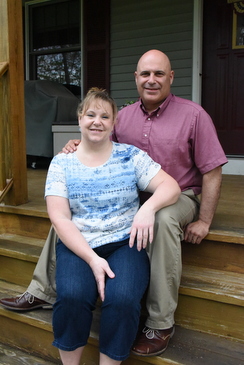 “It was a big, huge sacrifice,” says Bob.

“But, we knew it was going to be worth it,” says Michele. “They’re a gift from God, and I wanted to be there to raise them.”

As they would do so many times in the years ahead, they turned to God in prayer, and not long after that, Bob got a higher paying job.

“It all fell into place as if God had his finger on it,” he says. “There is no doubt that we struggled, and we sacrificed, but we didn’t sacrifice to the point where it hurt our faith. In a lot of ways, I think it actually strengthened our faith.”

Another decision they attribute to God was to sit in the front pew during Mass, something they didn’t do before their children were born.

They say they received encouragement and support from fellow parishioners and from Father Rice, who would gently let Bob know when it was time to take one of the littles ones for a stroll.

When Joshua reached school age, the Guillemettes made another choice that Michele says wasn’t initially on their radar.  At the invitation of her sister-in-law, she attended a class on homeschooling.  While it didn’t immediately convince them that it was a route they wanted to take, Michele says something kept nagging at them.

“For whatever reason, God pointed us this way,” Michele says. “So, we were able to choose what we wanted for a curriculum that included God in their learning, which I think has been huge for them.” 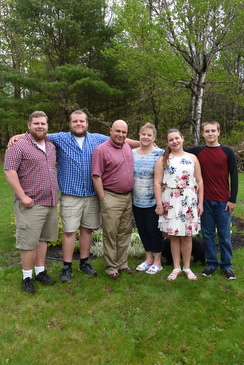 Michele begins each school day with prayer, including a decade of the rosary, and with religious education.  She and the children also reflect on an inspirational quote, and each year, they pick a homeschooling saint.

“We go through our list of intentions each and every morning.  We pray for priests, deacons, the bishop, the pope, all the vocations, and then, we each have our own intentions, so we all chime in,” says Jacob.

“It helps me to love more and more of the rosary and Mary,” says Theresa.  “I’ve always loved her, but it brings me closer to her.”

“Mom has a very strong relationship with our Blessed Mother, and she has brought that into our daily prayer life,” says Joshua. “Then, both Mom and Dad would always make sure at nighttime, we all get together, and we say our own prayers together. We also pray before a family meal. When our grandparents come over, we all sit down and pray. When our friends come over, some of whom are not Catholic, we still sit down and pray.”

In addition to religious education during homeschooling, the Guillemette children have participated in faith formation at St. Thérèse of Lisieux Parish in Sanford. Michele says she has never had to struggle to get the children to attend.

“They always wanted to go.  I treasure that,” she says.

“I really have enjoyed it, getting to talk with other kids your age or around your age and just to see what they think about the faith,” says Thomas.

When it came to attending diocesan youth events, such as the Journey retreat, or joining CYLT, Michele and Bob say they encouraged but did not insist their children participate. The boys will tell you it was the right approach.

“The first time I went to Journey, it was something that my parents and youth ministers kind of wanted, so I went along with it, and I completely fell in love with the program,” says Joshua.  “From there, I wanted more, because I was exposed to more in my faith life.”

“It was truly amazing,” Jacob says about CYLT. “The bond that the CYLT team made, it was truly incredible.” 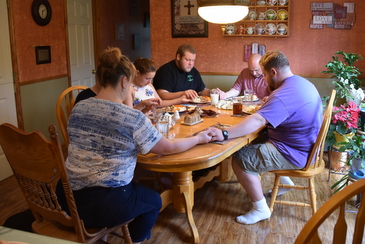 Michele and Bob also try to motivate their children through their own involvement.  Both were honored this year with Companions on the Journey Awards, which are given to adults who demonstrate excellence, leadership, and commitment in service to youth ministry.   Michele teaches faith formation to younger children while Bob is currently involved in high school youth ministry.  He is also an adult member of CYLT and a Knight of Columbus, as is Joshua.  Bob and Michele also bring Communion to the homebound.

The Guillemettes volunteer as a family at the free Matthew 25:35 Meals held monthly at St. Ignatius Parish Hall in Sanford, and they regularly visit the Lodges Care Center, a residential care facility in Springvale.

“I’ll tell these kids, that’s a holy moment. You don’t know what you’re bringing to these people, just taking the time to sit and talk with them, to pray the rosary with them,” says Michele.

Joshua and Jacob are also Eagle Scouts, choosing service projects that benefited Holy Family Church in Sanford. Joshua created a memorial garden dedicated to the unborn, and Jacob had a flagpole installed to pay tribute to veterans.

“I’m going to have a plaque engraved in honor of all the veterans of the parish and the country, and I’m going to put that right on the pole,” says Jacob.

The siblings have participated in other activities, such as school sports for the boys and dance for Theresa. Michele and Bob stress, however, that they try to make sure their children aren’t overscheduled.

“I would never want my kids to have the kind of life that some of their friends have. I find it so sad. They have no time to be kids,” says Michele.

The Guillemettes all say they enjoy spending time together. 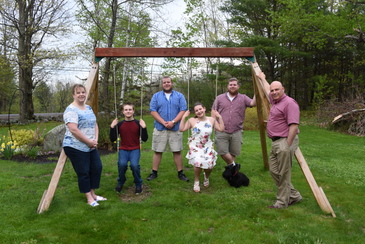 Bob and Michele say they have always tried to have an open relationship with their children, guiding them without holding the reins too tight.

“Kids will be kids, but I think they’ve always known that they can come to us,” says Michele.

“I trust my parents with everything in my life.  They’re always the first people I know I can go to if something goes wrong, or I have questions on something, or if I ever want to talk,” he says.

The siblings say they appreciate the gifts of love and faith they have received from their parents.

“The self-sacrifice of love was completely given to each one of us equally,” says Joshua.  “By showing maternal and paternal love for me and my siblings, I saw the immediate connection to St. Joseph, Christ, and our Blessed Mother.”

“I just feel they’re trying to get me closer to heaven, as close as they can get me,” says Theresa.

“They’ve definitely helped me think about the importance of life,” says Thomas. “We’re all set on this earth for a reason, and that reason is to follow God’s will.”