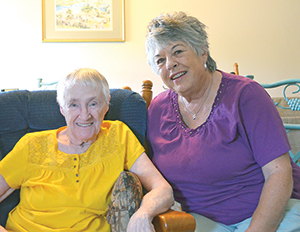 At age 87, Colleen Martin makes sure she keeps her mind active. She reads a book each day, gets the daily newspaper, subscribes to TIME magazine, and loves to engage in political debate.

But suffering from pain in her back and arthritis in her hands, Martin knows there are some things she can no longer do for herself.

Fortunately for Martin, that doesn’t mean she has to give up her apartment or her independence. She is paired with a “homemaker” through Catholic Charities’ statewide Independent Support Services.

“My biggest joy is to keep these lovely people independent for as long as they can be independent and keeping their sense of pride. That, to me, is the most important role we play,” says Judy Peace, assistant supervisor.

Giving Martin a hand is Patricia Merrill. She joined the program six years ago after retiring from her teaching job. Merrill has 11 clients in all, spending two hours a week with each of them.

“I am happy to do those things that are a little bit difficult for them,” she says.

That may include taking them grocery shopping or doing shopping for them, running errands, preparing meals, helping them pay bills, or doing household chores.

“It’s awful when it gets so you can’t open a jar,” says Martin.

Martin is one of 275 consumers in the Augusta-Gardiner area served by Catholic Charities through its Independent Support Services program. Statewide, the program has more than 2,400 clients. They include seniors like Martin, as well as those who are mentally challenged or those with mental illness.

“When friends ask me what I do for a living, I say I help the elderly and the disabled be independent in their homes,” says Merrill. “It’s a joy for me to be able to do that, and I love cleaning and making things nice for people.”

Trying to make things better for the people of Maine is at the heart of Catholic Charities’ work. Independent Support Services is just one of 28 programs the agency offers. Last year alone, Catholic Charities served more than 52,000 people, ranging from those a few months old to those only a few years shy of the century mark.

“We’re the social service arm of the Church, and it’s our mission to help all Catholics in their pursuit of fulfilling their baptismal call, which is to serve others regardless of their faith or religion, especially the least among us,” says Steve Letourneau, Catholic Charities’ CEO.

Catholic Charities provides hope and help to those recovering from substance abuse issues. Its food bank in Caribou helps to stock the shelves of 25 food pantries throughout Aroostook County. The harvest from its “Farm for ME” project means it can now provide fresh vegetables to those pantries. Its child development centers in Auburn, Biddeford, and Portland are ensuring that children are able to learn and grow in a safe environment. It provides education services for children who are visually impaired or Braille readers. It welcomes refugees, helping them to find homes, to navigate what can be a confusing government system, and to find jobs.

“They took us in like a family. They were like a family to us at that time,” says Michael Benjamin Augustino, who arrived with his family from southern Sudan in January 2000 and is now a candidate for the permanent diaconate. “This part of the Catholic Charities is to help the people. The charity is there. The faith, the hope, the love is there.”
One Catholic Charities program that is making many people smile is the Jessie Albert Dental and Orthodontic Center.

“Jessie Albert started with a woman, Jessie Albert in Bath, recognizing the horrible oral hygiene of children in the early 1970s,” says Letourneau. “She helped fund a dental program that began in a one-room train station, and that has blossomed into a state-of-the-art dental center serving 5,500 people.

“He said, ‘They just bend over backwards helping you to have a healthy mouth.’”

Wright recently received crowns on two of her teeth.

“The dental technician was incredible, a really nice young woman,” she says. “We sorted out exactly what needed to happen, and we set up the appointments and the payment plan, and forged ahead.”

The Jessie Albert Center welcomes people from all ages, from first checkups through braces and beyond.

“We operate as non-for-profit enabling us to reinvest in technology and staff training. By offering complete, state-of-the-art dental and orthodontic care, including products such as Invisalign, we attract a wide variety of patients here at the center — from those who couldn’t afford care anywhere else to those who could afford to go anywhere,” says Elizabeth Graff, the practice manager.

“We have people who drive, one who lives three hours away, almost up at the Canadian border, to see us. Two hours is nothing for people to come to see us,” says Valerie Bisson, CDA, orthodontic program coordinator.

While the wide range of Catholic Charities’ programs means more people served in more ways, Steve Letourneau says it also sometimes creates a bit of an identity crisis for the agency.

“When I ask people if they’ve ever heard of Catholic Charities, everyone raises their hand, but when I ask them to name two or three programs, nobody raises their hand,” he says. “A lot of people call us the best kept secret in Maine, but we really shouldn’t be secret, especially to Catholics. That’s what we’re here for — to serve others.”

While continuing the agency’s current programs, Letourneau is working to extend Catholic Charities’ reach even further by connecting with parishes.

“We’re trying to build partnerships with parishes to build up that capacity to serve people who are most in need, and I think that kind of emergency assistance is better done at the local level so it should be done through the parish, but we can really support parishes in building programs to help people,” he says.

Through its Parish Social Ministry program, Catholic Charities currently has active partnerships with 10 parishes and has assisted dozens of others. For instance, it is offering guidance to the Cluster 22 parishes of St. Bartholomew, Cape Elizabeth; St. John & Holy Cross, South Portland; and St. Maximilian Kolbe, Scarborough, as they work to form a Social Justice and Christian Service Committee that will coordinate cluster projects and also work on education about the Church’s social teachings.

“That team is going to be overseeing different charitable collections we do, trying to coordinate that a little better,” says Kathy Williamson, pastoral life coordinator. “It’s nice to have a committed group of people who is looking at that and also looking at our weekends to see where we can do those little pieces of education for the parish.”

“[Rodney] might install insulation. He did a lot of water stripping around doors,” says Laura Audibert, chair of the parish’s Social Justice and Peace Commission, “a lot of caulking, a variety of things depending on what each home specifically needed.”

They also installed smoke detectors, which they were surprised to find were often lacking.

“We need to raise awareness of some of the difficulties that people have, particularly folks on fixed incomes who live in older homes, who can’t get down into the cellars to do some of these fixes, and they’re too proud to ask for help,” says Audibert.

Catholic Charities also was able to provide St. Mary of the Visitation Parish, Houlton, with some money and expertise for a weatherization program and is helping the parish as it looks to expand its social justice programs.

“We put together a workshop last year to show how to do windows, and we’re going to try it again this year,” says Pam Cowperthwaite. “We’re also helping Stepping Stones, which is the local social agency where young mothers who don’t have family backgrounds or family support can go and get help with their babies. When they get to the point where they are going out on their own, we’re going to provide them assistance.”

Michael Smith, based in Portland, is the director of Catholic Charities’ Parish Social Ministry program, but Catholic Charities also employs Deacon Al Burleigh to assist parishes in Aroostook County, and it is partnering with Prince of Peace, Lewiston, to hire someone for that area.

“It’s very rewarding because when you help someone, you want to do it again and again because it just gives you joy,” says Deacon Al. “Everything you do is very special.”

Take, for example, the case of Lewis Blake, a Presque Isle resident. Part of his leg needed to be amputated, the result of diabetes, and he was told by his doctors that he needed to keep the wound elevated so it would properly heal.

Blake’s first thought was Catholic Charities’ Home Supplies and Food Bank, with which he was familiar because he used to bring donations there. Dixie Shaw, the director, had a recliner in stock and a team immediately brought it over. Unfortunately, a gap in the chair’s leg rest made it a poor fit, so Deacon Al went to assess the situation.

“He came with this chair here, and he was very, very cooperative,” says Blake. “It makes a world of difference.”

Deacon Al says you never know what kind of help someone will need. He says he recently helped a woman who had temporarily run short of money because someone had gotten access to her bank account. Although the bank was working with her on a resolution, that didn’t help her in the short term.

“I was able to help her with food. We went to a local food pantry, and we got her food for herself and for her family. And she had some doctors’ appointments at various places for her kids, so we were able to find a gas card for her.”

Catholic Charities funds programs in several different ways. In some cases, it receives state or federal funding. It also applies for private grants. It receives money from the diocese’s annual Catholic Appeal, and it holds its own spring and fall appeals, one of which is going on now, as well as fundraisers.

Steve Letourneau says with government dollars getting harder to come by, the agency has looked for innovative ways to keep its programs going. It is why it now operates thrift stores in Caribou, Presque Isle, Monticello, Portland, and Sanford. The stores aren’t only a place to get bargains; they also generate essential revenue.

“We’ve had success in northern Maine having thrift stores to help us operate our food bank, so we thought why can’t we do that elsewhere?”
Every time someone donates to or shops at one of the stores, they are doing more than cleaning out clutter or picking up bargains, they are helping others.

“We provide so many opportunities for Catholics to fulfill their baptismal call to serve others, either by volunteering, donating or even making referrals to the many programs when they see someone in need,” says Letourneau.

It is critical, he says, that the work of Catholic Charities continue. It is, after all, the mandate given to us by Christ in Matthew 25. Catholic Charities’ workers and volunteers, with the aid of your contributions, prayers, and support, feed the hungry, welcome strangers, clothe the naked, and care for the sick and those in prison every day.

313  Full-time employees, along with 375 part-time and on-call employees

47  Number of years Catholic Charities has been serving others