A welcoming presence at All Saints Catholic School 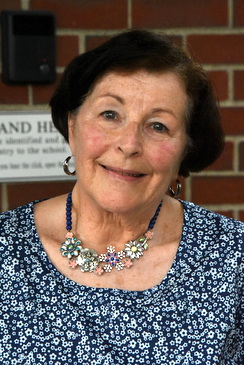 Cecile Beaulieu has been going to school for 41 years, and that’s not counting her time studying in the classroom. She began working at St. Mary School in Bangor in 1979, and four decades later, she still looks forward to going in every day.

For just about all of those 41 years, Cecile has worked as an administrative assistant.  Even after St. Mary merged with St. John School in 2000 to form All Saints Catholic School, Cecile continued working at the St. Mary campus, which serves children from preschool to fourth grade.

“I just adore the little kids. They’re so cute,” she says. “They are what keeps me young, young at heart.”

Cecile started when her own children were enrolled at St. Mary. Always wanting to stay close to her son and daughter, she began working in the cafeteria, while also volunteering in the library and with the Parents, Teachers, & Friends Organization.  She says she also served on several committees.

Cecile says she never applied for the job as administrative assistant, but when Sister Eileen Turner, RSM, the principal at the time, approached her about it, she didn’t hesitate to accept.

“I knew right off. It took my heart away that she asked me,” says Cecile. “I said, ‘I’d love it.’ I would be here with my kids every day.”

Cecile had previous clerical work experience and did a lot clerical tasks for the PTFO, so the transition wasn’t difficult. She says she has always been a quick learner, which has proven valuable through the years as technology has changed and improved.

“I was not afraid to try new things at all. I love being able to have the technology that we have,” she says. “It’s so much easier now. It figures everything out for you. I used to have to add all the columns for attendance, those little 0’s and 1’s in the little boxes for each grade.  I used to have to type all the class lists, the family lists, and any communications we had to our parents. I did it on a typewriter.”

Keeping track of attendance and communicating with families continue to be among Cecile’s many responsibilities. She also collects payments, orders books, answers the phone, and tries to be helpful in whatever ways she can.

“I try to accommodate everybody. It’s very important to me that I listen to everybody who has a need. I don’t like to leave things undone.  I rarely go home if I’ve got a big project going on that I want finished,” she says.

No matter what the task, Cecile says she always tries to do it with a smile.

“Maybe that is one of my gifts, smiling. I have a good sense of humor,” she says.

“Cecile has a wonderful sense of humor and loves to tell jokes and belly laugh,” he says. “She enjoys interacting with the parents and teachers.”

Not being able to have parents stop by her desk is one of the more difficult adjustments Cecile says she’s had to make as a result of the COVID-19 pandemic. She jokes that now she is going to have to ask her to husband to stop by and leave her coffee outside the door.

“The worst part of COVID for me is not being able to have my parents come in and talk and visit,” she says. “I’m going to miss them. I’m going to miss meeting the new people, too, but hopefully, down the road, that is going to change.”

Despite being age 75 and having multiple myeloma, a treatable but incurable form of cancer, Cecile says she’s not worried about working during the pandemic. She says she is not actively undergoing treatment at this time, and she has confidence in the safety measures All Saints put into place, which include a plexiglass shield in front of her desk.

“We’ve only got two grades who come by me. The other grades are going to come in and out of their own doors, so that will be helpful, and I’ll have my mask and my shield, and the rules say that if parents have to pick up a child early, they have to call the office, and I will walk the child out to them,” she explains.

Rather than being a concern, Cecile credits her job at All Saints School with helping her to deal with her illness.

“Keeping my job and coming to work every single day has been my salvation as far as waking up in the morning and knowing that you have an incurable cancer. That is heavy, and it can be depressing to think about, but I get to school, and I’m fine,” she says.

She says there are numerous reasons why she enjoys her job so much, most especially the kids and her colleagues.

“I’ve met so many really nice people here, and that’s why. I love the kids. I love Catholic education. I think it’s such a good structure for kids to start off,” she says. “It’s a lot of things.  I think, for me, it’s the camaraderie of everybody, and I think we have a good principal.”

The appreciation is mutual.

“Cecile loves the students at All Saints Catholic School,” says Houghton. “She has great attention to detail and loves to interact with the priests.”

Cecile says her appreciation for the value of a Catholic education goes back to her upbringing.  She attended kindergarten at St. Louis School in Fort Kent and then, after her family moved, continued at St. Martin of Tours School in Millinocket through the twelfth grade, graduating second in her class.

She says while today’s teachers aren’t as strict as the sisters who taught her, there are still behavior expectations, and teachers still keep a watchful eye.

“Everyone cares about everyone here, including the staff, the wonderful staff,” she says.

Cecile says another gift she has received from her years attending and working at a Catholic school is her deep faith.

“There is just a spiritual piece here. I don’t know how to explain it. In my heart, I feel that God’s presence is here with these kiddos,” she says.

Cecile says working in a Catholic school and praying with the staff and children every day has kept her faith strong, the importance of which she stresses.

“I’ve always felt close to God,” she says. “You’ve got to have that in your heart first. The first thing you need to keep going is your love of God, your spirituality.”

It is why she starts each day with a cup of coffee and the Rosary.

“I usually go out on my front porch every morning. Even in the wintertime, I put my coat on, gloves, and I sit on the front porch, because it gets direct sun in the morning. It’s like my prayer corner,” she says.

Cecile’s husband is already retired, but she says he is content with her continuing to work as long as it makes her happy.  Asked when she might join him in retirement, she answers, “maybe this year” but then reconsiders.

“If things keep going well with my health, why not continue?” she says.

Cecile says it all comes down to one thing.

“Basically, I’m still here because I love it. I don’t know how else to say it. I love my job.”