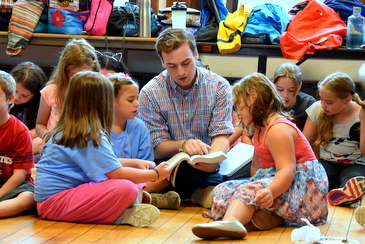 Why is the Body of Christ referred to as the Eucharist?  Why is Jesus’ body kept in the tabernacle? Why is Mary depicted holding rosary beads?

Those were among the many questions asked by children attending Totus Tuus, a catechetical program offered for the first time this summer in the Diocese of Portland.

In all, nearly 400 youths from grades 1 through 12 participated in the weeklong program offered at six parishes from June through August.  The parishes included St. Thérèse of Lisieux in Sanford, Prince of Peace in Lewiston, Parish of the Precious Blood in Caribou, St. Maximilian Kolbe in Scarborough, St. Paul the Apostle in Bangor, and Corpus Christi in Waterville.

“I figured I would do something faith related over the summer, and I thought it would be a good experience for me,” says Simon, age 17, who participated at St. Max. “It’s important to keep doing things to learn about your faith.”

“I thought it would be cool to learn more about my faith,” says Emma, age 12, who attended in Lewiston. “It’s a lot easier to learn when you have other people in the classroom. When it’s just yourself, it’s harder to understand because you don’t see other points of view.”

“I wanted to come to know more about my faith, and it’s gone super,” says John-Paul, age 13, who took part in the opening session in Sanford. 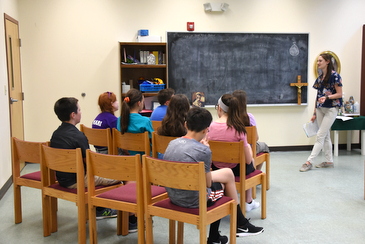 Taken from the episcopal motto of Pope Saint John Paul II, Totus Tuus means “Totally Yours.” The program was developed in the Diocese of Wichita, Kansas, which was one of the reasons Father Seamus Griesbach, director of the Diocese of Portland’s Office of Vocations, thought it would be a good fit here.

“Wichita is a rural diocese not unlike our own in many ways,” he says. “Whereas programs sometimes tend to come out of the larger metropolitan archdioceses, this program is really well suited to smaller parishes in the sense that’s it’s really an attempt to help provide resources to parishes to do a summer program that otherwise they wouldn’t be able to do.”

Totus Tuus is designed to be led by seminarians and young adults who are then assisted by parish staff, priests, and volunteers. Father Griesbach says it gives the young adult leaders a strong immersion into the Catholic world.

“If I wanted my child who is in college to really experience the faith and grow in their faith, I would really have a hard time thinking of a better experience for a summer,” he says.

The four who led this year’s program were Liam Gallagher, a seminarian, who is originally from Bryant Pond; Emily Amann, from Scarborough, who attends the College of the Holy Cross in Worcester, Mass.; Dale Brown, from Lewiston, who attends Nichols College in Dudley, Mass.; and Maddie Dichard from Glenburn, who attends Franciscan University of Steubenville in Ohio.

“The ultimate goal is to help these kids become saints. We want to inspire in them a love of God, a love of Mary, and a love of the Church. We especially want to encourage their devotion to the Eucharist and to Mary, especially through praying the rosary,” says Liam. 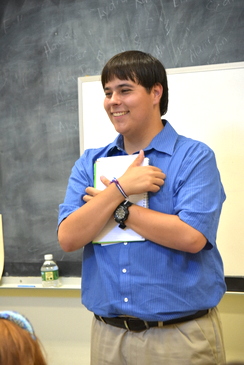 “I hope the young people learn a lot about their faith and grow and deepen their relationship with the Lord,” says Emily.  “It’s been great to teach them about it, and then, when they’re talking about it, you’re realizing things about yourself and definitely about your faith.”

“I’ve always tried to be committed to Christ, but this is giving me a whole new aspect of the faith that I never even understood, so it’s very special,” says Dale. “Being an authority figure, it’s a challenge, but it’s another gift that I’ve been handed.”

“It’s really fun because you can see them turn to you for advice and also see the things that they’re excited and happy about,” says Maddie.

The young adults teach both through catechetical lessons and personal witness.

“It’s really cool because you get to see people who have been where you are in high school and have moved on to do such great things,” says Katie, a senior, who attended the evening teen session in Lewiston and helped out with the younger children during the day. “They have an awesome team this year and an awesome program, and I am really grateful for it.”

All of the teaching was aimed at helping the youths develop a deeper understanding of God and of the Church.

“We not only take the kids to Mass but help to explain the parts of the Mass to them, what they’re doing at Mass, what they can do at Mass,” says Liam. “We teach them about a decade of the rosary and actually pray that decade with them.” 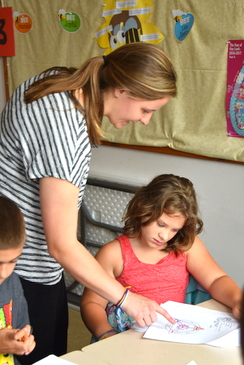 Totus Tuus is designed to continue through a six-year cycle that follows the catechism and the mysteries of the rosary. This year’s primary focus is on the Apostles’ Creed and the Luminous Mysteries.

The children were given colored string to wear on their wrists as a reminder of what each mystery meant.

“This white one was from the Lord, from the baptism in the Jordan. The white is for purity.  This blue one was for the wedding at Cana, and the blue is the color that Mary wears, so that’s why. Purple was yesterday’s color for the proclamation of the kingdom of God and the call to repentance. Purple is for royalty because purple was a very expensive dye to get so only royalty could afford it.  And the gold string is for today, and it’s for the Transfiguration because Jesus’ face shone like the sun,” explains Emmalyn, age 8.

Judging by the number of raised hands anxious to give answers, the number of questions posed, and the amount of laughter during lunch and recreation time, the program was a hit.

“It’s just been very well received. I think that is a great credit to our team,” says Father Griesbach. “They’ve really worked well together, and they’ve connected with the kids.”

“I have really enjoyed it,” says Evelyn, a fourth grader. “We’ve learned about the mysteries of the rosary and about Jesus, God, and the Holy Spirit.” 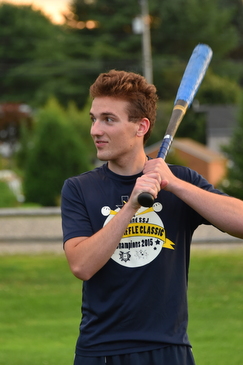 “I like the spiritual nature and getting closer to God, and having fun,” says Evan, age 14.

“I’ve grown more in my faith, I think, this summer than I have ever grown,” says Bene, age 15, who traveled from New Hampshire to attend. “It will help me keep on the straight and narrow to, I guess, find the weeds in the hayfield, uproot them, and then plant a good seed in their place.”

“For the teens, it’s great for us to get together, all the same ages, and learn about our faith,” says Grace, age 16, who both volunteered during the day and attended a teen session at night.

The young adult leaders say it was rewarding to see how the youths grew in faith, as well as to see the friendships formed along the way.

“When we ask them questions, their responses are just amazing. They really are picking up the material,” says Maddie.

“It’s amazing and really wonderful for me to watch how they’ve grown and how they have come to know these things,” says Emily.

“It’s great to see them get excited about their faith and ask good questions. They show a real desire to want to grow closer to God and learn more about their faith,” says Liam. “It’s awe-inspiring.”