Serving up Theology in the County 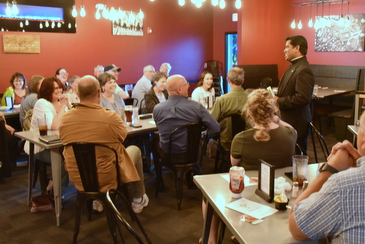 Waitresses busily move from table to table carrying plates filled with appetizers, burgers, salads, and sandwiches. On a big-screen television, the Boston Bruins and St. Louis Blues are facing off in Game 7 of the Stanley Cup Finals.  But on this Wednesday evening, it is neither the wings nor the wingers responsible for drawing dozens of patrons to the Warehouse Bar & Grill in Caribou. It is an opportunity to grow in fellowship and faith.

“I think it’s awesome to be out in public. That’s what Jesus would have done back in the day, not just go to church on Sunday but go out and evangelize and share the faith in the open. I think it’s awesome and powerful to be able to do that,” says Peter Deschenes, from Presque Isle.

Nearly 50 men and women from as far away as Houlton and Madawaska filled a room at The Warehouse to take part in Theology in the County, a program initiated by Theresa Bonner, director of youth ministry at the Parish of the Precious Blood in Caribou.  Back in January 2018, Bonner started Theology at Tim’s, a faith-sharing group for teens which meets monthly at Tim Hortons in Presque Isle.   As word spread about that program’s success, Bonner says she was approached by adults desiring a similar opportunity.

“A lot of it was just the motivation of people contacting me because they wanted to do what the high school kids wanted to do,” she says.

Bonner says when she was designing Theology in the County, she chatted with Joshua Houde, who organizes Theology on Tap for young adults in southern Maine. She also reflected on some Catholic Leadership Institute pointers on trying to meet people where they are at in their faith journeys. And she thought about what type of program might have attracted her years ago prior to her work with the Church. 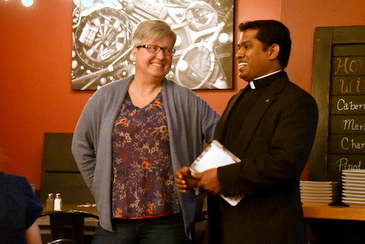 “If someone had invited me to come to a faith-sharing group, I would be interested, but I might not have taken that step. So, I thought, ‘What would have gotten me to go and do something?’ That was part of it and, also, trying to provide something that would be a gateway to people furthering their faith.  This was a great opportunity for something like that,” she says.

Bonner says she thinks people sometimes hesitate to participate in faith-sharing groups held in churches fearing they may need to know more than they do, even though that isn’t the case. Much like Theology at Tim’s or Theology on Tap, she says what makes Theology in the County work is its low-key approach.

“Going and have a beverage of your choice and sharing a meal with somebody and just having a conversation can be a lot less threatening than saying, ‘Hey, come to a faith-sharing group,’” she says. “It’s just a way to break down the barriers, so faith isn’t so scary. It’s interesting. It’s fun.”

Those who attended the June session agree with her assessment.

“This is informal,” says Kendall Sutherland from Woodland. “It’s good to talk amongst the people, and you get to meet new people from outside your own church.”

“It’s an informal setting. You get to meet a lot of people from other parishes, which is nice, and you get different viewpoints from different people,” says Debbie Sutherland, Kendall’s wife.

“I started coming because I heard that youth were doing it, and it was a big thing for them,” says Cindy Gagnon from Caribou. “My husband and I are very involved in the parish anyway, so I wanted to come and learn more. I knew it would be a good environment, and it is. It is very relaxed. I’ve learned a lot.” 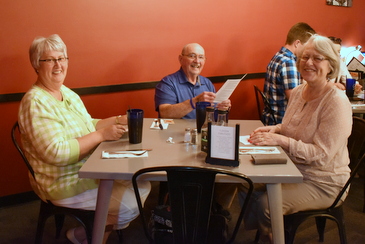 Bonner tried to launch the program in January, but snowstorms pushed back the start until March.  She says the gatherings have drawn adults from their 20s to their 60s, many who have attended more than once.

Each session features a speaker with a predetermined topic and a lot of opportunity for input from participants.

“It’s awesome to hear the different speakers but, also, to talk with people about the faith together, hear different points of view, and share and enrich our faith together,” says Deschenes.

“People share their faith, and we get to share our faith, and there is no judgment,” says Gagnon.

The opening session of Theology in the County was led by Deacon Luis Sanclemente from St. John Vianney Parish in Fort Kent, who discussed “Masculinity and Theology: What we all should know.” In April, Father Joël Cyr’s topic was entitled “Perfectly Imperfect: How to be disciples.”  That was followed by Father Dave Raymond, pastor of the Parish of the Precious Blood, who shared insights on honoring the Sabbath, and in June, Father Antony Alexander Maria Doss, HGN, parochial vicar of the Cluster 2 parishes in Madawaska, Saint Agatha, and Van Buren, discussed the Ten Commandments.

“Each commandment is like a doorway. It opens to many other possibilities,” he told those gathered, while urging them not to give up, no matter how many times they falter. 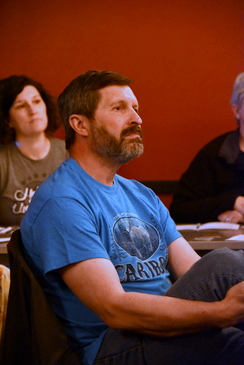 “The more we keep going back to temptation and then asking for God’s forgiveness, the more we still have the possibility of being redeemed.  The time we give up on ourselves and say, ‘I don’t want to go and say the same things again and again,’ then, that is discouragement, and discouragement is the weapon of the Evil One.”

Those in attendance say they took a lot from the evening.

“I like that he explained in detail a lot of different circumstances that you wouldn’t think would be part of that commandment,” says Debbie Sutherland. “I thought it was excellent.”

“You hear about the commandments when you are raised as a child. You hear about them all the time, but to actually sit down amongst your peers, amongst your Catholic brothers and sisters, to really hear it from a priest, all the ins and outs, and get all the other insights, is just great,” says Mark Bourgoin from Limestone, state deputy of the Maine Knights of Columbus.

“I thought it was awesome. It gave me insight into things that I just didn’t understand about the commandments and how to answer other people’s questions about the Lord,” says Lois Bourgoin, Mark’s wife. “I’m really glad I came.”

“You learn a little bit more about your religion,” says Herman Legassie from Presque Isle. “Being a cradle Catholic, we just know what to do in this and that, but we don’t always understand why we do it.”

“It’s awesome to see different topics brought up that affect our culture today,” says Deschenes. “It’s very powerful, I think, to get together with folks and to talk about the faith and learn more about your faith.” 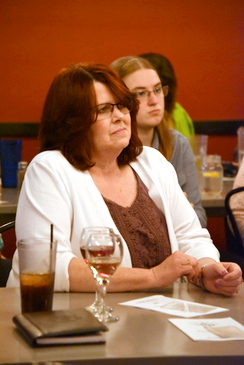 Bonner says, as with Theology at Tim’s, she launched Theology in the County with the intention of holding four sessions and then evaluating whether to continue.   It’s been such a success, she’s now setting up the fall schedule.

“Everyone who attends has really enjoyed the idea of it,” she says. “The conversation flows, and the faith is just woven into it.”

In addition to helping people grow in understanding of their faith, she hopes it will make them more at ease talking about it.

“People are going to feel more comfortable sharing their faith in any venue,” she says.

She also believes it could benefit the teens she serves in youth ministry.

“Hopefully, by meeting the grandparents and meeting the new, young parents, they’re going to see the importance of fostering the faith at all levels, which will then be the feeder system for them to continue with the faith journey for their children,” Bonner says. “It is a multi-faceted event.”