Theology at Tim's has Faith Brewing 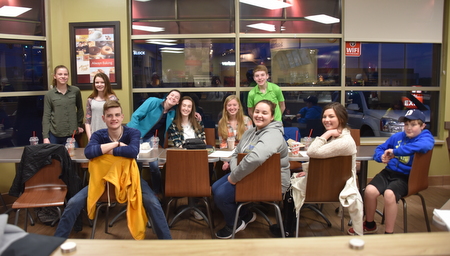 Coffee, community, and conversation are proving to be an appealing blend for teenagers in Aroostook County.  One Sunday a month, the teens gather at Tim Hortons, either in Presque Isle or Caribou, to grab a latte and learn about their faith.

“I look forward to it,” says Jude Mosher, age 15, from Presque Isle. “I like how we all come together, socialize, and have fun and, at the same time, learn things.”

“It’s fun to get around and meet other people who are Catholic and just converse about things,” says Paul Bonner, age 16 from Easton.

Theology at Tim’s was started by Theresa Bonner, Paul’s mother, who is the director of youth ministry at the Parish of the Precious Blood in Caribou.  She says the idea came to her after she attended Christian Leadership Institute (CLI) workshops and a Life Teen conference, which both emphasized the importance of relational ministry.

“I was trying to think of new ways to meet the youth where they’re at and find a way that was inviting, not threatening, and a common place where we could come together and share our faith,” she says. “And I said, to myself, ‘Well, they’re always at Tim Hortons.’” 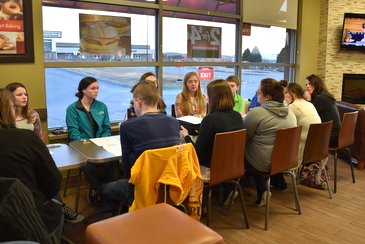 She called the program Theology at Tim’s, playing off Theology on Tap, the popular program geared towards young adults. She even called Joshua Houde, who coordinates one of the southern Maine Theology on Tap programs, for some pointers.

Theology at Tim’s started slowly back in January but has taken off since.

“It’s been gaining in popularity, and the kids have been talking about it with one another,” says Theresa. “Kids who have maybe not come to youth group, they’re finding their way back through this, which is cool.”

Those in attendance come not only from the Parish of the Precious Blood but from the parishes of the St. John River Valley, some traveling nearly an hour to be there. They say it’s great to come together in a casual setting.

“Tim Hortons, for Aroostook County at least, is the hangout place for us. So, it’s nice to gather in a place where we all feel comfortable,” says Delia Bonner, age 18. “I love coming and just being in fellowship with all the Catholic teens of Aroostook County.”

“I think that it’s a really good place to have it because not only do we have a nice, social place to come, but other people can see it, and they may be interested. That might be the seed we plant just by talking about our faith publicly,” says Danika Deschaine, age 18, from Van Buren.

“I really like it because it gives us a chance to come together outside youth ministry. It’s not in a church setting; it’s in an actual community setting, so it gives us a different environment to talk about our faith in,” says Olivia Mosher, age 18, from Presque Isle. 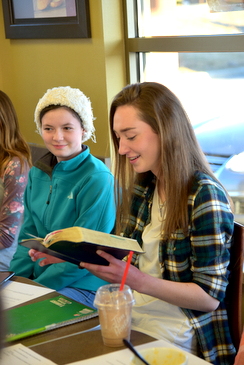 “To come to a place where you would normally come on a day-to-day basis, it kind of relaxes you and allows you to give your real opinion instead of tailoring it to others because you’re uncomfortable,” says Kailee Cox, age 17, from Presque Isle. “You come here to kind of hear other people’s points of view and give other people yours.”

Theology at Tim’s begins with social time, followed by a presentation from a guest speaker, a question and answer period, and discussion.

Theresa says the teens choose most of the topics. Speakers have included Father Antony Alexander Doss, HGN, who talked about materialism; Father Nehru Stephen Savarayia, HGN, who shared thoughts about discovering your true vocation; Corey Morin, former youth minister, who discussed “Staying Soulful after Sunday”; Sophie Ouellette, a missionary with the Fellowship of Catholic University Students (FOCUS); and Hilary Blanchard, an RCIA instructor at Nativity of the Blessed Virgin Mary Church in Presque Isle, whose topic was ”How To Share the Faith and Keep the Conversation Going.”

“The first thing you want to do is study your faith. You want to study tradition,” she told the youths.

The teenagers say they’ve taken something away from each session they’ve attended.

“The materialism one affected me…that you have to let go of everything that’s material and just let God in,” says Jude. 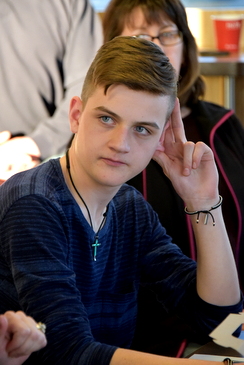 “I’ve learned new tools on how to share the faith with people who aren’t Catholic and even people who aren’t Christian at all, using the catechism and utilizing the Bible, or even just my own theology,” says Delia. “I enjoy learning about the faith from other people. It’s one of my favorite nights of the whole month.”

“There is just so much to learn from the Catholic faith. It’s just all so beautiful,” says Danika.

Theresa says she is pleased with how Theology at Tim’s has turned out.

“It’s been so much fun to watch it grow each month,” she says. “It’s been great!”

And there is more to come. The next Theology on Tap will be held September 16 at Tim Hortons in Caribou. The presenter will be Deacon Luis Sanclemente, from St. John Vianney Parish in Fort Kent, who will discuss “What do you stand for?”  For more information, contact the Parish of the Precious Blood at 207.498-2536.