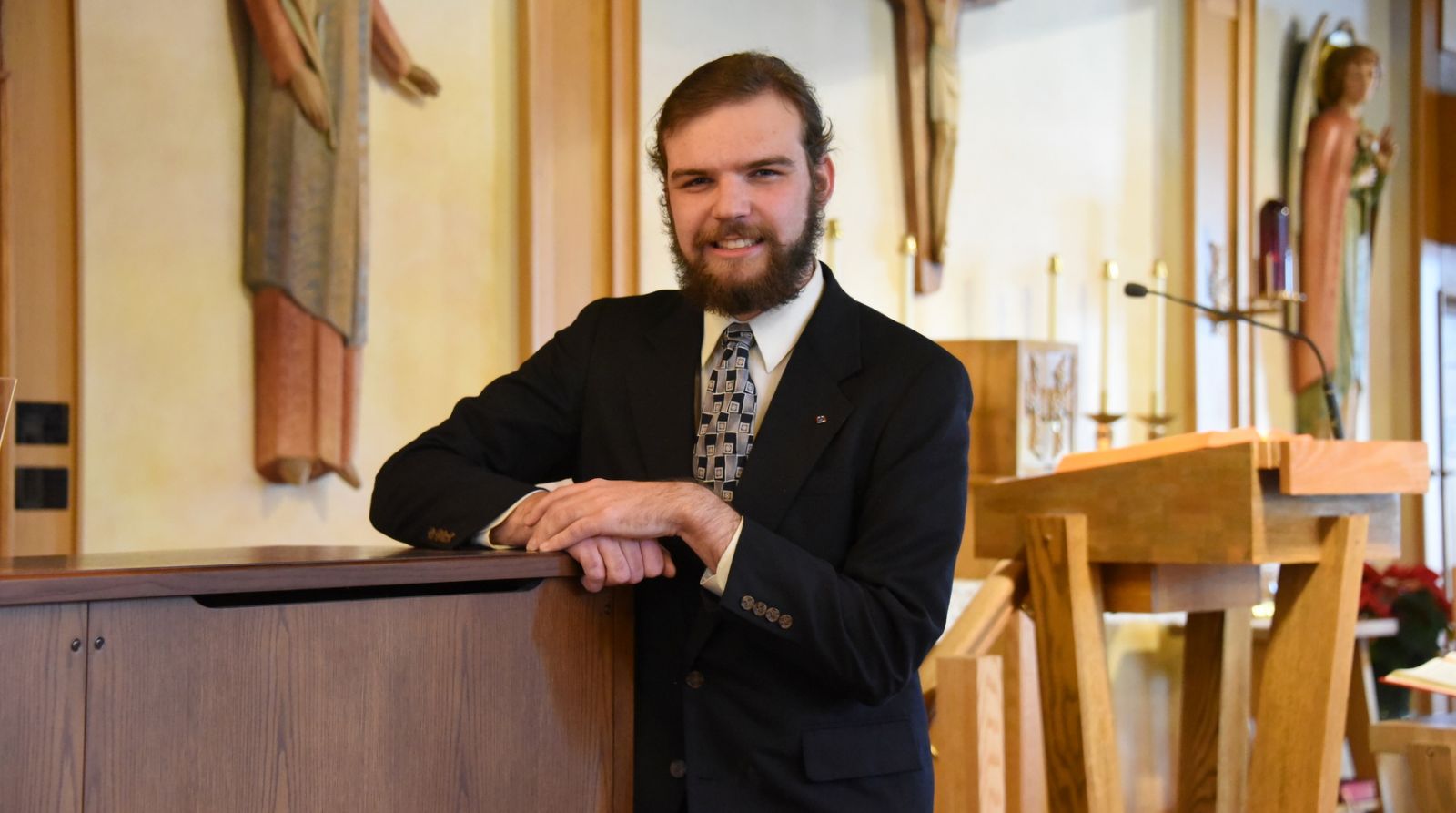 Ask 18-year-old Liam Scott to share something about himself, and one of the first things that he will tell you is that he is a devout Catholic.

“I’ve been a Catholic my whole life,” he says. “I pray the Divine Office every day, the Liturgy of the Hours. I typically go to daily Mass.”

He also attends Mass three times each weekend, not only because he finds it enriching but because it is his job. This first-year college student is the music minister at Holy Martyrs of North America Church in Falmouth, part of the Parish of the Holy Eucharist. With his love for his faith and his love for music, Liam describes it as a natural fit.

“It’s kind of second nature that as a musician and a lifelong Catholic, I should become a church organist,” he says. “Being here every weekend is amazing.”

In addition to playing the organ, as the church’s music minister, Liam makes sure there are cantors scheduled, occasionally serves as the cantor himself when someone else isn’t available and chooses the hymns for the Mass.

“That is the most important task — making sure the music not only ties into the liturgical season but also the Gospel or the readings in general,” he says. “You want to have a variety as well. If you play the same hymns every weekend, people are going to get tired of them. The congregants have their favorite hymns as well that they want to hear at the Masses that they go to, so that is also an important part in choosing the hymns.”

Liam says a Mass should engage all the senses, and he sees music ministry as an important piece of that.

“Music plays such a profound role. It has an ancient role in the Church, going back even before Christianity. Judaism had the psalms which were to be sung with shaking timbrel,” he says.

His introduction to the organ came at age 7 and resulted from a trip to a Goodwill store with his father. 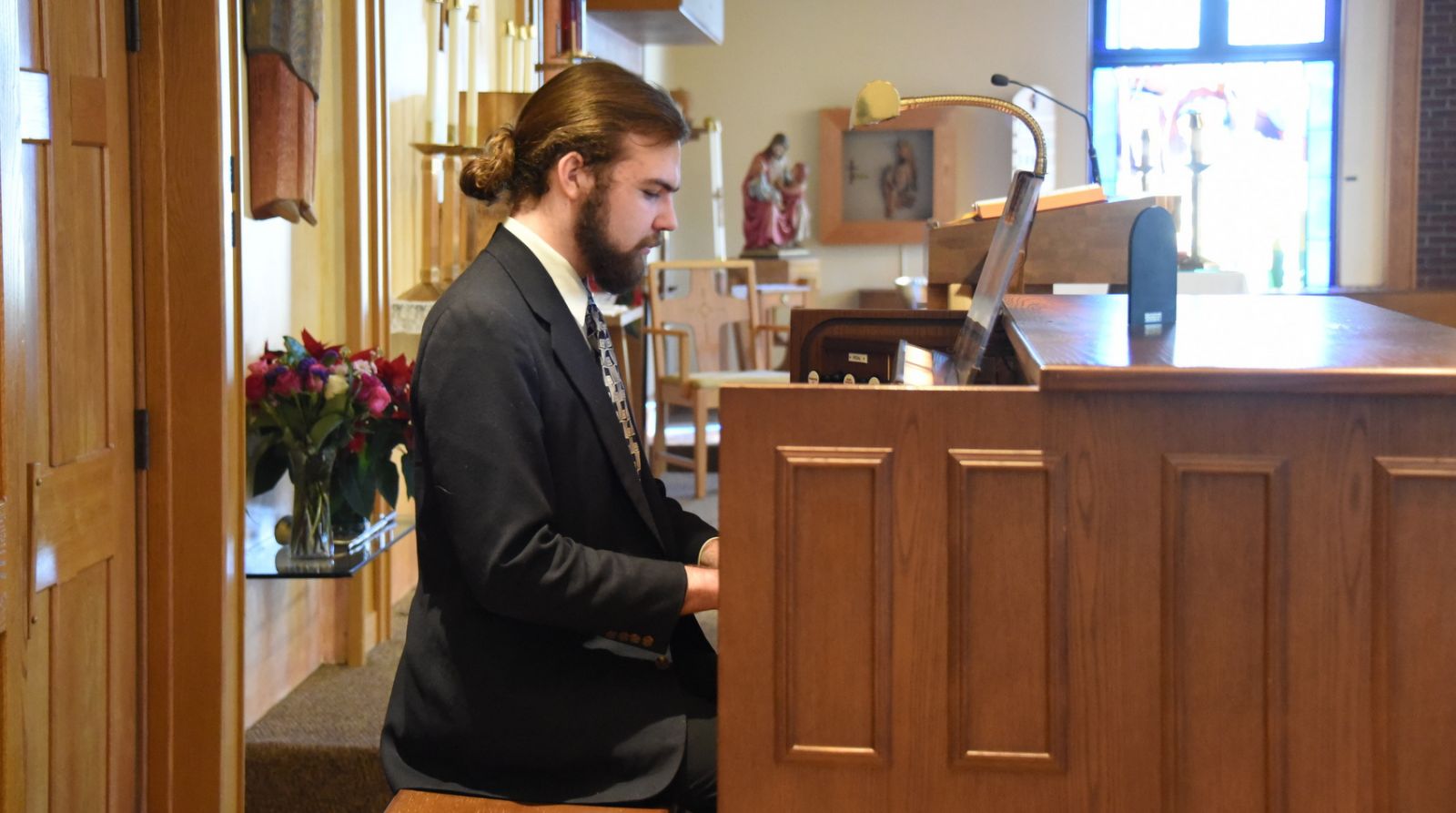 “They had this tiny, little electronic organ,” he says. “I think I was just kind of mystified by it. It was interesting seeing that it had two keyboards on it and a keyboard on the bottom. I had only ever seen pianos up to that point, and I was like, ‘Why is there so much extra on here? There are so many little buttons everywhere.’”

His father agreed to purchase it if Liam was willing to pay half the cost. In reality, his father covered all but $5 of the price which Liam remembers was around $40.

Liam’s interest in the organ increased after he joined the choir at St. Joseph Church at age 13. It gave him an opportunity to watch Helene Fortier, Good Shepherd Parish’s music director, play the church’s large pipe organ.

“I was closer to the organ than I had ever been before, and I wanted to kind of see what was going on with it,” he says. “I was always fascinated by the organ because the keyboard makes it look like a piano, but it’s not a piano. It’s really so much more because there are so many different textures and flavors you can get out of it from all the miniature pianos that are in it and all the different ranks and stuff.”

At age 16, Liam asked Fortier if she would give him lessons, and she agreed.

“She would teach me usually on Saturdays. We would do that every week. I did that for about a year and a half, and then, COVID happened, and we had to stop. She then recommended me to Phil Thibeault, the organist at Sacred Heart Church, and he became my teacher.”

Sacred Heart, located in Yarmouth, is also part of the Parish of the Holy Eucharist, and it was Liam’s connection there that led him to apply for the position at Holy Martyrs when there was an opening.

“It was surprising to me that he [Thibeault] would recommend me. I was quite honored,” Liam says.

As a result, only about two years after starting formal lessons on the organ, Liam became the church’s music minister.

Liam can also play the brass instruments, most especially the French horn, but it is the organ to which he is most drawn. In fact, Liam now has a collection of organs filling his parents’ garage. He got his first one, a reed organ, as a Christmas gift when he was 15.

“There are no pipes. There are just reeds, so it can be in a compact space,” he explains. “We got it from one of the old mills in Saco, and that started my collection of organs.”

His second organ was a Wurlitzer theatre organ, which used to be in the chapel at St. Joseph Church.

“That was really nice. That was an electric one,” he says.

Then he got a pipe organ that a man in southern Maine had built in his house but was giving away.

“We took all the pipes out, and then we took out the scaffolding of the pipes, and then we got the console out,” he says. “Getting the pipe organ and having to install it in our house with all the blowers, it takes quite a bit of effort, and me and my dad were able to learn along the way how they really, truly work. There are so many different parts,” he says.

He also picked up another reed organ from a former convent, and later, a couple other organs were added as well.

Liam continues to practice and to study and would like to continue to serve the Church as an organist going forward. He is currently majoring in organ performance at the University of Southern Maine.