Teacher of the Year Honored for her Commitment and Creativity 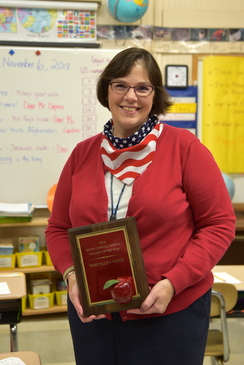 Mary Ellen White has been in the classroom for 33 years but has never lost her passion for teaching. The most rewarding part of the job, she says, is watching her students grow and thrive.

“Seeing that confidence build, seeing a kid that cried -- who said I can’t do this, or I don’t want to do this, or I’m scared of this -- smile because they conquered it,” she says.

She loves bringing new ideas and challenges to her classroom at St. Brigid School in Portland and says she isn’t afraid to sometimes veer off the path a bit if it helps her students learn.

“If you don’t meet them where they’re at, it’s hard to bring them along,” she says. “It’s just really, really helpful to keep assessing, ‘What are you thinking right now?’”

For her commitment to educating her students, her desire to cultivate creativity, and her drive to continually develop her own skills, White was chosen as the Diocese of Portland’s 2018 Teacher of the Year.   It is the second year in a row that a teacher from St. Brigid has received the honor.

“Mary Ellen White is one of the best teachers that I have worked with in my 31 years as an educator,” says William Burke, principal. “Mary Ellen impresses me the most with her invaluable classroom experience, ability to individualize learning, and desire to motivate students to explore nature and the physical world.”

“It’s obviously quite an honor. I never, ever, ever expected to win,” says White, who was presented with the award by Bishop Robert Deeley during a Catholic Educator Workshop. “I’m looking out at the sea of other teachers, just really feeling united with them and honored to be among them. It was pretty cool.”

White has taught at St.  Brigid School for 12 years and prior to that taught for another 12 at St. Patrick School in Portland.

A biology major in college, she originally thought about becoming a doctor, following the example of her father, but realized it wasn’t for her.

She became a seventh-grade science teacher in Westbrook, then in Gorham, but when her two sons approached school age, she looked for an opportunity at a Catholic school. 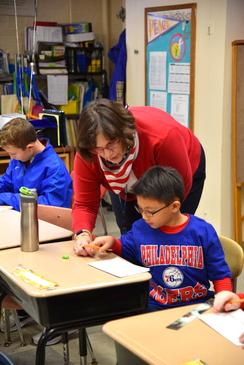 “We hoped our children could go to Catholic school, and so, we thought, ‘Well, this would be great if I teach in Catholic school. Then, we can all be there together and grow as a family,” she says.

White says her faith has always been an integral part of her life.

“Two of my aunts were Sisters of Mercy. My grandparents were very devoted to their parish. So, I had wonderful examples of faith all around me my entire life. Having family members and very close friends of my parents as priests, religious sisters, and brothers, it was all part of life for me.  Then, I went to St. Anselm College, where I met the Benedictines, who were so hospitable and wonderful,” she says.

In addition to teaching at a Catholic school, White serves on the parish council at Our Lady of Hope Parish in Portland and is also a member of the prayer shawl ministry there.

It was while she was at St. Patrick School that White switched from seventh to third grade, but don’t ask her to pick a favorite between the two.

“They’re different strengths and challenges, but I loved them both,” she says.

White points to the sense of immediacy among the older students.

“I like the energy, the urgency, the searching of seventh and eighth graders,” she says. “They’re trying so hard to be adults but aren’t, so there is that vulnerability of letting people know who they really are, as they are trying to figure out who they really are.”

Third graders, on the other hand, have fewer inhibitions.

“They let their inquisitiveness show and their excitement show,” she says. “There is something exciting about the discovery.” 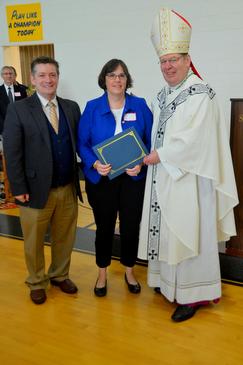 No matter what the grade, White says she tries to help her students become confident, independent learners.

White keeps students engaged with activities such as planting gardens on school grounds, raising plants from seeds in the classroom, and raising salmon from their egg stage until their release in a river.

“She is a good science teacher. She always plans fun stuff for us,” says Skylar, a third grader.

“She’s a great science teacher,” agrees Ian, another student. “She makes us do fun activities for science. That’s why she should earn the Teacher of the Year.”

White also brought engineering to her classroom after signing up for Tufts University’s Teacher Engineering Education Program, designed to help K-12 teachers inspire the next generation of creative problem solvers.  White says it has helped her understand the value of productive struggle and failure and bring that to her students.

“If we built something before, it was a one and done, but now, there is an opportunity to reiterate and test again,” she says.

White says she has found that some students who may not do well at mastering facts and figures turn out to be natural problem solvers.

“Some of the kids who have traditionally not been recognized as strong students, they are just shining and rockin’ it with the engineering tasks.  And other kids are seeing those students in a whole new light and seeking their opinion on things. It’s just super, super cool.  Then, on the other hand, you have the kids who are the calculators. They can memorize their math facts. They can memorize their spelling list, but they have a great deal of difficulty solving problems. And just seeing how they work through these challenges has been so, so interesting,” she says.

White says what she most enjoys about teaching at a Catholic school is the sense of community.

“I absolutely love the relationships we form with the families.  I see at least one family member of almost all of my students almost every day and get to know grandparents, aunts and uncles.  I love that we have three-year-old babies through eighth grade, so we see families grow and develop,” she says. “All of our children are loved. It’s just a special thing.”

She says what makes a Catholic education stand out is the focus not only on academic excellence but on forming the whole child.

“The value of Catholic education is the value of ethics; the love of one another, being living examples of that; loving your neighbor; learning to work with other people in a respectful, kind way; not having to validate a million value systems and, therefore, not having one at all; having the connection for centuries to people on every continent,” she says. 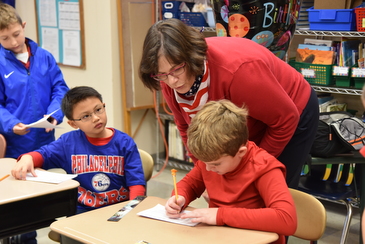 White says there have been changes in the classroom over the past 30 years, most especially the need to help some students develop socially, something sometimes lacking because of overpacked schedules and electronic devices.

“We do have some families in which the kids are out playing in the dirt, running through the woods, and that kind of thing, but more and more, if they’re not in a scheduled activity, they’re on their screen. We suffer in terms of being able to make conversation, being empathetic to others, because they’re not looking at people’s faces, they’re looking down at a screen,” she says.

She says children are also exposed to more adult situations than ever before, the result of varying family situations, pop culture, and social media.

“There are things that are a normal part of elementary school that never would have been before. The social learning moments take up a lot of time, but you can’t teach a child who is not ready to learn because they have so much else going on in their head,” she explains.

White says she knows how hard many teachers work, which is why she says winning the Teacher of the Year Award is such a huge honor.  While she says she is still surprised she won it, her students will tell you that it is well deserved.

“I think it was good because she is a really nice teacher,” says Ian.

“I think it was amazing that she was able to do it,” says Michael.  “She is an amazing teacher and one of the best I’ve ever had.”