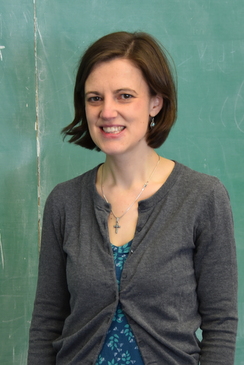 Even before Lent arrived, Jocelyn Carr of North Yarmouth was counting down the days to Easter.

What has made Carr so jubilant is her journey into the Catholic Church. This Easter, she received the sacraments of confirmation and first Eucharist, making her one of 123 new Catholics around Maine.

“It’s just been so wonderful for me,” she says.

Carr, who was an active member of the Presbyterian Church, says it’s a journey she never expected to take and one she may not have taken if not for a new job as music teacher at St. John’s Catholic School in Brunswick.

“I was blindsided,” she says.

After taking time off from teaching to raise her two children, Carr was looking to reenter the workforce in 2017.  She saw the job opening at St. John’s and thought it would be a good place to start.

“I came into St. John’s thinking, ‘O.k., this will be a nice little get back into teaching job, a nice little job.’ I had no idea that a year and a half later, I would be so in it to win it. I didn’t see it coming at all, and it makes it all the more special,” she says.

Carr, who is not originally from Maine, has taught at several schools in the past but says St. John’s stands apart.

“Of all the schools where I’ve taught, this one, I want to get up in the morning and come to work. I love it here,” she says.

Immediately after arriving at St. John’s, she says she felt God’s presence.

“It just filled my whole being. It pervades the whole building, the community, the environment. It’s just such a special place. It’s such a strong faith community,” she says.

She credits the support and inspiration of her fellow teachers and staff members.

“One thing I really appreciate about the teachers, most of whom are very committed Catholics, is that they’re genuine and real and loving and caring. I’ve encountered it in other churches, but here, they are so real, so real and just really great people,” she says. 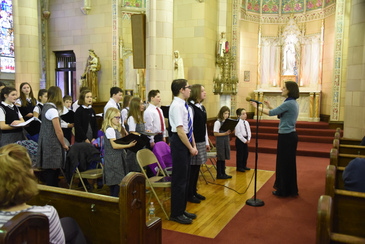 She also points to the students.

“We have great families, and our children are so receptive. It’s so easy to teach here,” she says.

As the music teacher at the school, not only did Carr start attending Mass with students and faculty each Friday, but it is her job to prepare the student choir for it. Although it was a new experience, it instantly resonated with her.

“I just feel so connected spiritually,” she says. “I love the Mass. My heart sings.”

She says she was drawn to the richness and depth of the faith and most especially by the true presence of Christ in Eucharist.

“That, for me, was a big draw into realizing I really need to become Catholic,” she says.

She recalls one weekend in Bangor when the realization hit home. She was there for a rehearsal with the Bangor Symphony Orchestra, for which she plays French horn, and was deciding which church to attend Sunday morning.

“I was thinking, ‘OK, should I go to this evangelical church? Should I go to this Episcopal church?’ And my heart was like – I just have to go to Mass. I just knew that was where I belonged,” she says. “I just encounter God so much more than I do in any of the other places I’ve been.  It’s hard to put into words sometimes.”

Originally, Carr planned to keep her decision private but then decided it was too wonderful not to share with her colleagues.

“When I told the rest of the teachers I was going to become Catholic, they all cheered,” she says. “They’ve been so supportive along the way.” 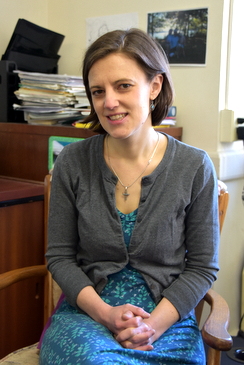 She began attending Rite of Christian Initiation of Adult (RCIA) classes last fall and says that made her fall in love with the faith even more.

“I’ve learned a lot, and it just made me more and more excited and hungry to become Catholic,” she says.  “I love the view of just caring for others, the perspective of caring for all people, human dignity.”

Carr says her husband, who remains a member of the Presbyterian Church, has been very supportive, telling her he has seen a wonderful change in her.  She says she has seen it, too. She says she feels it in her music.

“I feel like I can connect with God while I am performing. I’m able to bring that into my artistry, and I feel it makes me a better musician,” she says.

And she sees it in her everyday life.

“I think joy. I think peace.  I’m just happier, and I have an easier time with whatever life puts at me,” she says.

While she never expected a new job would lead to a new life of faith, she says, “God just knocked really hard on my door.” All she did was let Him in.