A tailor-made ministry Down East 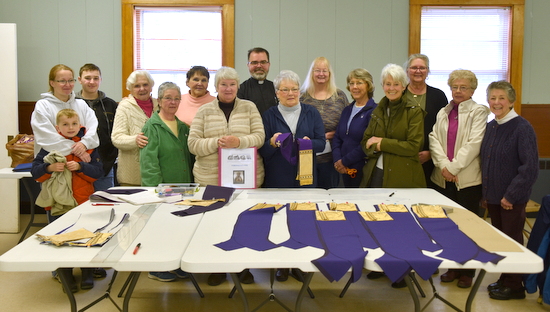 “This is what we call the base fabric, so that is what we lay down on the base. Then, everything else would be an accent.”

It’s not often that you hear a priest sharing sewing tips with parishioners, but that is what you’ll find happening at St. Peter the Fisherman Parish in Machias.

“Do you see this blue thread here?  Those who do embroidery know that is couching thread. That covers the seam much like a trim would,” explains Father Philip Clement, parish administrator.

Father Clement is an ecclesiastical tailor, someone who specializes in making liturgical vestments, as well as accoutrements for churches, such as altar cloths.

“I’ve always enjoyed working with my hands and making things, and this just happened to be something that fell into my life.  I think God led me to doing it.  It is a gift He gave me in order to give back to the Church,” he says. 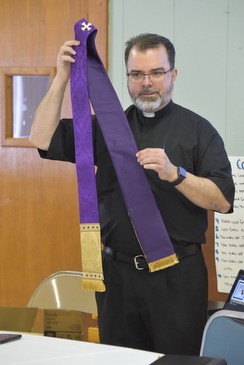 It’s a passion Father Clement discovered five years ago while serving at a parish in Tampa, Florida.  New vestments were needed for the celebration of the Tridentine Mass, and rather than buy them, he decided to make them, even though he had never sewn before. He turned to a member of the parish who had been making vestments for decades, and she agreed to teach him.

While he stresses his ministry as a priest come first, he says he works on vestments in the evenings as a way to relax, always looking to learn and try new approaches.

When Father Clement came to the Diocese of Portland in 2018, he brought his passion for making vestments with him, along with his nine sewing machines and sergers, steam press, patterns, and other materials.  It is a gift he is now sharing with members of St. Peter the Fisherman Parish.

Father Clement recruited members from the parish’s three churches -- Holy Name of Jesus in Machias, Sacred Heart in Lubec, and St. Michael in Cherryfield – to make altar accoutrements and liturgical garments.  That group then grew into an altar society, focusing on the Mass and what happens at the altar.

“I wanted to draw people back into centering on the importance of the Mass. Everything we do as Catholics flows from that,” he says.

“I love to sew. I wanted to get involved with the Church, and this is the perfect opportunity. It’s been wonderful,” says Debbie Holmes from Lubec. 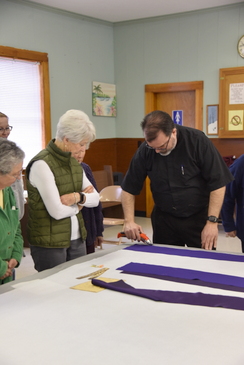 “Father was very convincing about the need for this little organization, so I volunteered,” says Cathy Prince from Addison. “I love to sew, and I love being social with other women and being in a group.”

Although Father Clement intended to start the group off slowly, he noticed the churches needed new Lenten altar cloths, so that became the first project. They created cloths that are white on top with purple brocade draping down.

“We jumped right in,” he says. “It was a tremendous amount of work, but we got it done for the first Sunday of Lent. They took their own natural talents and put it into a different gear.”

Although the project was challenging for some, they say it was rewarding to see the results.

“It’s wonderful.  Who would have ever thought we would be doing that?” asks Josie Kord from Cutler. “It makes you feel good, and then, when you see it being used, it’s heaven.”

Father Clement chose priests’ confession stoles as the group’s next project, viewing them as easier to make and as a way for the women to learn techniques they would need to make more elaborate vestments.

“There is base fabric, accent fabric, and lining fabric. And then, you find a trim that is going to embellish it and finish it off just right,” he explained to the group. “We cover it with this decorative piece called galloon. It kind of dresses it up and covers the seam.”

After receiving a tutorial, the women moved to different stations, either to do cutting, pressing, or sewing.  Those with experience got down to work quickly under Father Clement’s watchful eye. Others took more time to observe and learn. 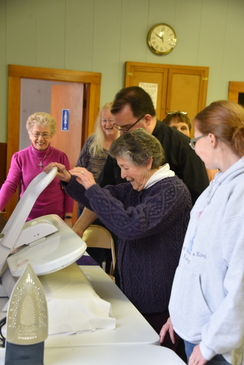 “Not everyone has the ability to sew, but they have a desire to serve, So, we have them hold. We have them iron,” he says.

“It’s something different; it’s not that they’re hard,” says Jeanine Wright, of Columbia, an experienced seamstress, who is also the parish’s religious education coordinator. “I have picked up new ways of doing things.”

In addition to giving instructions on how to make the garments, Father Clement also takes time to explain the history and significance of them.

“It should draw you more deeply into understanding not only what we do and why we do it, but who we do it for – to give honor and glory to the name of Jesus,” he says.

He explained, for instance, that in the early Church, stoles were strips of linen that served as handkerchiefs for wiping your face. It was only later that they became more elaborate and came to be symbols of the priesthood and diaconate.

“He always gives a lesson or two, and it inspires us while we’re doing the manual part of it,” says Kord. “I’m learning so much more about the Church, some things I would have never really delved into or looked at as far as getting the history of it and the why behind it all.”

Members of the group say an additional benefit has been the opportunity to come together as a parish community, something that has been a challenge, since the parish’s churches span a distance of nearly 60 miles.

“Socialization, that’s been a nice surprise,” says Cathy Murphy of Machias. “It’s great to bring the three churches together like this.” 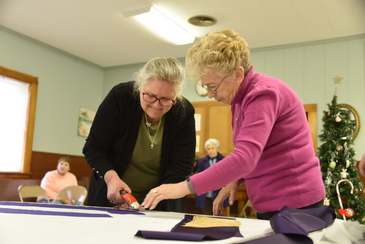 “It builds community,” says Wright. “I’ve been in this church for 47 years, and it is the very first time in all those years that the three churches are working together on a project. That’s wonderful.”

While the altar society’s work will first benefit St. Peter the Fisherman Parish, Father Clement says there may be an opportunity to help other parishes as well.

“We’re doing this for fun, in service to the Church, in service to the parish, but hopefully, we’ll have other projects that can reach outside, because not every parish has the skill, the expertise, or the resources,” he says. “Another parish that is struggling, we might be able to help them out.”

Father Clement, for instance, has offered to make, at a reduced cost, diocesan vestments for the international priests serving in Maine.

“These priests are coming from dioceses that are poorer than Washington County, and they have given their lives to the priesthood and the Church. This is an opportunity for them to receive a little bit of a break,” he says. 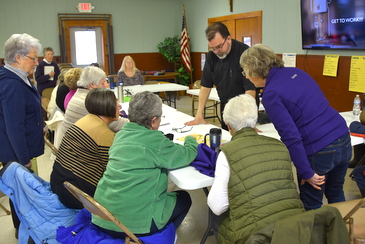 Father Clement says he is grateful for all the parishioners who stepped forward to volunteer.

“Your help has been tremendous,” he told them.

The parishioners say they are thankful for his presence and leadership.

“We love Father.  He’s so personable and someone you can talk to,” says Ellen McCurdy from Lubec. “He’s just there for you, and his homilies are wonderful.”

“We’re just so grateful to have Father at our church. God led him here,” says Kord. “It seems like Washington County is pretty much forgotten on so many bases in the state, and to think that we have him here, it’s a blessing.”