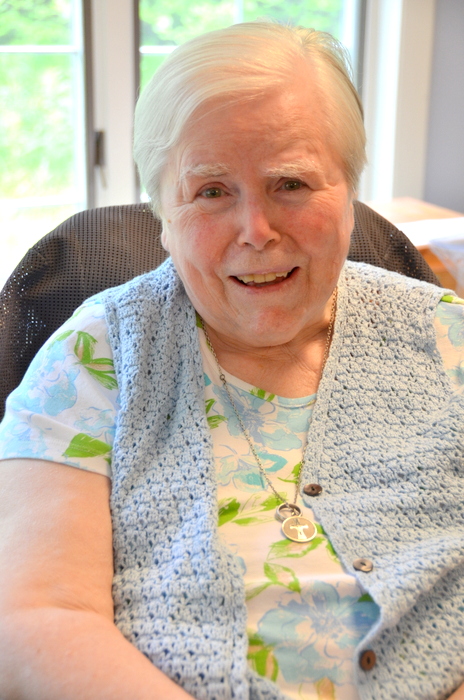 Sister Anne Fitzpatrick, RSM, receives warm greetings as she moves along the corridors of the Saint Joseph’s Rehabilitation & Residence in Portland.  It seems like there is someone she knows in every room and around every corner.  Her progress is slow but steady; her power chair adeptly driven forward just by the use of her breath.

Sister Anne, a Sister of Mercy, suffers from multiple sclerosis, a disease that has stolen most of her physical strength. It has not, however, taken away her desire or ability to serve others.

“I feel responsible for the gifts God gave me," she says.

Sister Anne loves to be with people, and they enjoy being with her. She says many of the residents have wonderful stories to tell, and she is happy to be there to listen.

“I feel as though my ministry is the ministry of presence,” she says. “We have here mothers of ten who have given their whole lives to raising their families. We have doctors who have served for years. We have businessmen who have lived full lives.  If you get to know others and their lives, each one has a blessed story to tell.”

Since arriving at Saint Joseph’s ten years ago, she says she has considered it her mission to recognize the dignity and grace of each resident.

“There was one woman we all loved who was deaf and mute. And I just made it a point to call her by name and stop and smile. That was my ministry.”

With her extensive education, she says she is also able to be an advocate for the residents.

“When I observe problems, I don’t hesitate to make them known to those in charge. I almost feel like I am a voice for the voiceless in some ways.”

Sister Anne says she has found that her current condition can actually be a comfort to others who are dealing with the challenges that result from age and ailments.

And, despite her limitations, she is still setting an example for others to follow.

“I also know that it’s an inspiration for them to keep going,” she says. “The weakest member of the community often draws the greatest amount of love.  I think, at this point, I am so disabled that what I do is draw forth love,” she says.

Her ministry of presence extends beyond the Saint Joseph’s residents. She receives regular visits from a group from Goodwill International Industries.

“It gives them a chance to use their social skills. It’s a nice thing to be able to socialize,” says Linda Lowell, a Goodwill direct support specialist.

“One day, they were telling me what they do all day long, and when they finished, one of them asked me, ‘What do you do all day long?’” recalls Sister Anne, with a smile.

Among the things she shared with them was her love for poetry.

“So I wrote them a poem. They all wanted their own copy.

“It’s amazing,” she says. “I’m able to write and text.  I text my nieces and nephews. They’re all on Facebook, so we go back and forth."

She also uses her communications skills to both recruit and stay in contact with Mercy Associates, laypeople who work with the Sisters of Mercy and share their charism. 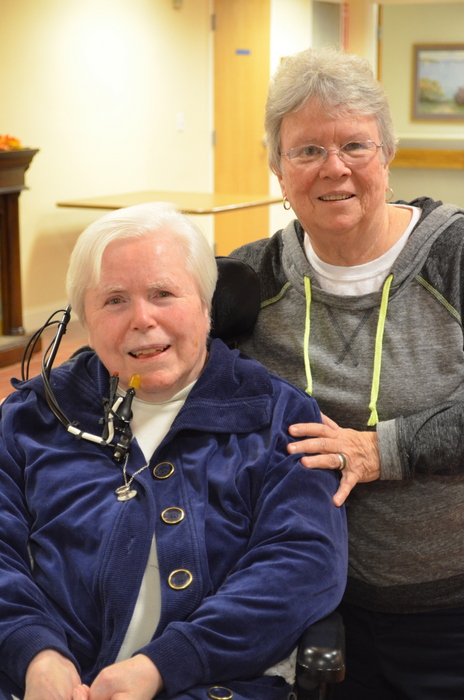 “My role is primarily now as a contact sister. I continue to invite those that I see really have the Mercy charism.  I meet with the individuals I have invited.”

In addition, Sister Anne has recently gotten involved in the sisters’ international project in Haiti.

“When I want a global perspective, I come to Anne,” says Sister Dale Jarvis, RSM.

Sister Anne spearheaded several food sales at Saint Joseph’s to raise money for an orphanage and to support schoolchildren in the island nation.

“There were five food sales, and Anne and her friends were able to raise almost one-thousand dollars,” says Sister Dale.

“It’s a wonder I have any friends left,” Sister Anne says with a smile.

“I tried to do things like, in February, death by chocolate,” she says. “I tried to make it fun. The whole community here got involved. It was priceless to see that.”

Sister Anne also organized a friendly competition to raise money and awareness about the situation in Haiti.

“That was all so good for me, because it gave me the opportunity to share in the mission of the Sisters of Mercy.”

Sister Anne has embraced that mission since joining the congregation at age 18.

“Fifty-four years, all of them happy,” she says.  “I’ve never regretted my decision."

Growing up in Houlton, she became familiar with the sisters through school and through their ministry at Madigan Memorial Hospital, where Sister Anne’s parents were employed and where she went to work as a teenager.

“My first real job was as a CNA when I was a junior in high school. I don’t think I had the title, but I did the work,” she says.

Even then, she felt a call to serve.  Despite her mother’s objections, she remembers helping a boy suffering from polio.

“My mom would say, ‘Anne, that is so contagious. You should not be doing that work.’ I said, ‘But Mom!’ I wanted to do it,” she recalls. “I felt so blessed because I felt I was making a difference.”

Although she thought she would serve in hospital ministry, she instead became a teacher because that was the need at the time.  She taught at St. Benedict High School in Benedicta.

“I taught everything from chemistry to economics. Every day, I taught six subjects. That was a wonderful mission,” she says.

She was among four Sisters of Mercy in Benedicta at the time.

“We did whatever was needed. I was the only driver, so anywhere the car went, I went. We had fun,” she says. “The community challenged me to stretch every gift I had to put it to the service of others.”

When she was in her 30s, she decided to further her education, receiving a master’s degree in Scripture Studies.  It would lead to leadership positions in the Office of Catechetics and in parishes.

She remembers feeling on top of the world.

“Before I was diagnosed, I was mountain climbing. I was very, very active,” she says.  “My education was well-rounded. I was prepared to go out and set the world on fire. Then, like Paul, I got knocked off my horse, and all of a sudden, here I was, needing everything.”

She was diagnosed with multiple sclerosis in 1980 when she was 39 years old.

“Now, I am experiencing the contemplative aspect of life but not by choice,” she says.

She says she has tried to approach her life since the diagnosis with the same good humor her parents always displayed.

“My dad’s favorite saying was ‘No problem, no problem.’”

Still, having always been very self-reliant, she admits it has been a challenging change.

“There is a whole process of surrendering that is a life’s journey. It is certainly a learning process,” she says.

She is grateful for the assistance she has received from people like her good friend Kathy Dodge, who helps care for her.

“I am amazed at the generosity of that woman. Over the years, she has given more and more,” says Sister Anne.  “I guess that’s, maybe, the biggest grace of my life. I was always a giver, and now I know the richness of receiving the goodness of others."

While she still gets excited when she hears of possible new treatments for MS, she says, at the same time, she is at peace.

“Whether we live or whether we die, we are the Lord’s,” she says.

And it is with that reliance on the Lord that she continues to drive forward.

“I don’t have, really, any illusions about the reality of life,” she says. “I just know God is in charge and somehow something good will come from whatever is going on.”