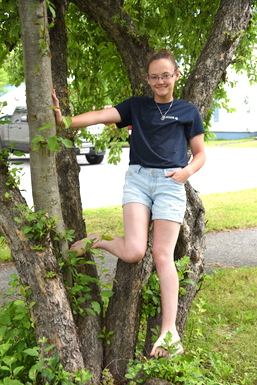 Although she has faced some challenges in her life, they haven’t stopped 18-year-old Elizabeth Deschenes of Presque Isle from doing her best to live out her faith, serving both her parish and her community. That has included helping out the Daughters of Isabella with service projects and doing the same through the Girl Scouts.   She has also been an active member of the youth ministry group, inviting other young people to participate.

“She has grown so much in her faith and her willingness to put herself out there and is a key member of our faith community,” wrote Theresa Bonner, youth minister for the Parish of the Precious Blood in Caribou, who nominated Elizabeth for a St. Timothy Award, presented by the Diocese of Portland to teens who live as disciples of Christ.

Elizabeth was one of 12 teens from parishes across the state to receive the award last April.

“This young lady, although a quiet member of their group, is a calm witness to how staying steadfast to your faith can get you through all of life’s struggles,” said Lynette Sirois, youth minister from St. John Vianney Parish, Fort Kent, who was one of the presenters.

“It’s been a hard journey, but I can see myself now, where I am, that I’m on a good path, and God is with me on that path,” Elizabeth says.

Elizabeth will tell you that she has had a guardian angel looking out for her since the day she was born, 10 weeks early, weighing less than two pounds. She says there were concerns she wouldn't survive. Instead, she has thrived, despite having to manage anxiety and Attention-Deficit/Hyperactivity Disorder.

It has meant some adjustments for Elizabeth, but she hasn’t let them stand in her way.  She shares, for instance, how she ensures that she gets the most out of Mass, despite finding it hard to focus at times. 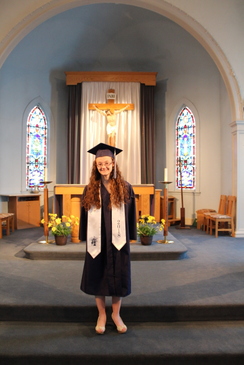 “I’ll read the readings beforehand because of that fact that it takes several times for me to read something before it actually gets in my head,” she says. “If I haven’t read it before, I zone out, and I don’t remember anything.”

As for the homily, “I’ll have something to fidget with, so I can actually pay attention.”

Elizabeth says she is best able to connect with God through prayer and adoration, where it’s just the two of them without distractions.

“Adoration, for me, is my time with God,” she says, “telling Him my sins, asking for prayers, getting any prayers I want for someone else.”

Elizabeth credits youth ministry and diocesan retreats with helping her to stay connected to her faith.  She points to Corey Morin, former youth minister at the Parish of the Precious Blood, and to the retreats offered by the diocese’s Office of Lifelong Faith Formation.

“The retreats are what really got me turned on to it,” she says. “Once I had gone to Journey for the first time, I was hooked. I went all four years. I couldn’t not go back. I made two friends, a set of twins, and we have remained friends through all of it. We looked forward to going so we could see each other, grow in our faith, and we had a lot of fun.”

Elizabeth says the talks during the Journey retreat, held annually in the fall, provided validation for her beliefs.

“They would give you these stories, which you knew only could happen if God was involved,” she says. “We all have that doubt at some point in our faith, and those talks really helped me.”

Elizabeth says Journey and the youth convention especially helped her this past year, when she was struggling to accept the death of one of her grandfathers and had also experienced the difficult breakup of a relationship.

Elizabeth also points to the support of her family.

“I do feel I have that good base: my grandfather, my mom, my grandmother, my dad,” she says. 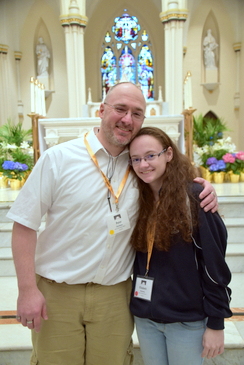 When Elizabeth was presented with her St. Timothy Award, perhaps no one was prouder than her dad, Peter.

“It was really awesome,” he says.

Peter especially appreciates the significance of the award because he received it himself in 1994.  He also knows the struggles his daughter has gone through during her life, including a 2011 accident which left her seriously injured.  Elizabeth was riding her bike in Presque Isle, when she was struck by a truck.

“There were two times in my life where I wasn’t expected to make it: when I was born and when I went through the accident,” Elizabeth says. “I know my guardian angel was watching over me both of these times.”

“She spent a week in intensive care in Bangor, but look at her now, just a very strong young lady, a very awesome young lady,” Peter says.

While Elizabeth says there are pieces of that day that she still doesn’t remember, her father and mother say it is a day they will never forget.

At the time, both had fallen away from their faith, but the accident brought them back to God.

“It was the first time in a long time that I said, ‘Please God, please, please, let her be o.k.,’ opening myself up to God,” says Peter. “That was God’s way of calling me home, and I knew that, and I understood that, because I was already trying to find my way to come back.” 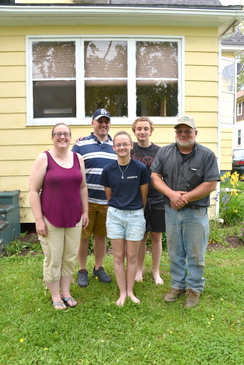 Billie, Elizabeth’s mother, recalls praying beside her daughter’s bed, then unable to sleep one night, going to the hospital’s chapel.

“I sat down, and emotionally, I just lost it. I’m sitting there, thinking, just taking in everything that had happened in the last 48 hours, and I heard the door open and close. And I’m thinking, ‘OK, somebody else is in here.’ I turned around; no one else was in there. So, I went back to thinking, and I had this pressure, like somebody was leaning on my shoulders. Then, the pressure was gone, and I heard the door open and shut again,” she says. “I’m like, ‘Somebody is trying to tell me something.’ I was in the presence of God.”

For the Descheneses, living out their faith has now become a family affair.  Not long after the accident, Billie responded to an email request and decided to help with middle school ministry.

A couple months later, Peter was asked if he would consider playing music at Mass.

“I knew that was God’s way of opening the door for me,” he says.

He now plays both at Mass and at youth ministry events.

“To me, winning the Powerball is when you see the music affecting either the congregation or the youth, because as a music minister, you understand that it’s not you. You’re doing God’s work.”

Peter attended an ACTS retreat at the Christian Life Center, which he says “pole vaulted me that much further.”  He also reconnected with the Knights of Columbus and has now earned his fourth degree, joining his father-in-law, Rodney Bourgoine.

Rodney has long been active in the Church. He serves as an extraordinary ministry of holy Communion and an altar server at St. Catherine Church in Washburn, and he drives the bus that takes teens from northern Maine to retreats held in southern parts of the state.  A bus driver and mechanic by trade, he approached his employer four years about getting a bus to drive the youths, and while the company requires that he gets paid, he donates any overtime back to youth ministry. 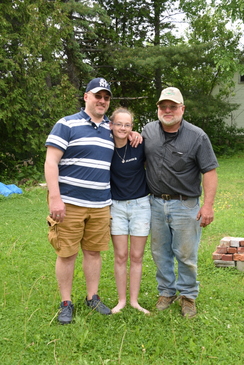 “They are the most enjoyable trips I take of the year,” he says. “We plug in the rosary or the Divine Mercy Chaplet. Peter plays his guitar.”

For his work supporting youth, Rodney was recently honored with a Companions on the Journey Award, the adult complement to the annual diocesan youth recognition.

The Descheneses all stress the importance of guiding youths on their faith journeys.

“You look at the youth of today and you can see it. They’re thirsting for knowledge,” says Peter. “There are so many wonderful examples of amazing youth.”

With the support of her family and friends, Elizabeth says she is confident she will be able to carry her faith forward as she enters her college years.

“I know that God is with me no matter what, and I have a good support system,” she says. “Maybe I may fall a little bit. I may slip, but I know that I have the faith and the strength to keep me going.”