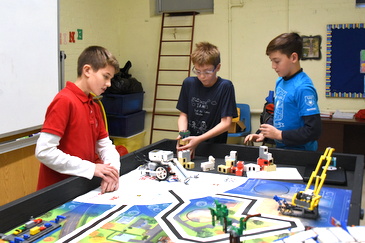 “You build a stack of special blocks, and then, you have to push them into a circle. If it’s the same color, you get more points.”

Ethan Pettyjohn, a fifth grader at St. James School in Biddeford, explains what it takes to excel in the robotics competition of the FIRST LEGO League challenge.

“There was one mission: you had to drive up a ramp and stay there. That was pretty hard because the ramp is pretty long,” he says.

Ethan and his teammates at St. James spent weeks designing, programming, and testing their robot, measuring distance and calculating tire rotations, to get it to just the right spots to perform missions chosen from a preset list.

“We stacked up a bunch of blocks, and then, there are these things you can put on top of them like gardens and stuff,” says Collin Namiotka, a seventh grader. “Then, we would push that into the black circle.”

The goal is to program the robot to perform flawlessly, avoiding obstacles, moving from mission to mission within an allotted amount of time.

“The strategy for it is that we have our missions in a certain way,” says Henry Kenniston, a seventh grader.  “All our stuff is reliable. It does the same thing every time.” 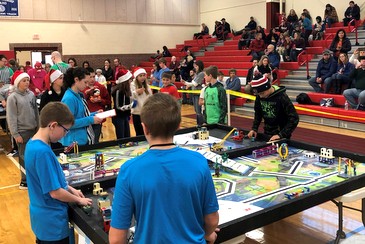 Their strategy and reliability proved to be a winning team finished first for robot performance in the Southern Maine FIRST LEGO League Qualifier, earning the students a spot in the state competition, where they came in third in robot performance and scored so high overall that they are a second alternate to go to the world festival. Only 108 teams around the world make it.

“We are beyond ecstatic,” says Sydney Googins, a seventh grader. “We are awestruck!”

“This is a great opportunity,” adds Henry.

“To be a second alternate, you have to excel in all areas of the competition,” says Kathleen Pike, FIRST LEGO League director for the state of Maine.

In addition to the St. James School team, a team from Holy Cross School also competed in the state competition after finishing first in robot design in the qualifying round.

“Our robot design is basic. However, the judges praised the sturdiness and our consistency when running the missions,” says Ryan Vigue, a Holy Cross eighth grader.

The Holy Cross team also had an impressive showing in the state competition, finishing seventh in robot performance. 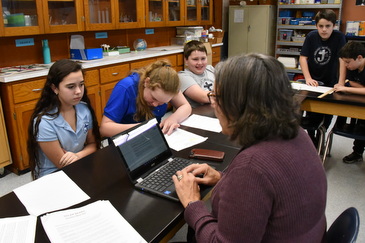 The FIRST LEGO League is a global competition that challenges students to put their math and engineering skills to work to solve a community problem based on a theme. As you might expect, LEGO® bricks play a central role, but it is actually a multi-faceted competition.  There is the robotics challenge for which students use LEGO® MINDSTORMS® technology to build a robot and program it to complete several missions. There is also an innovation project, which this year involves identifying and researching a problem having related to a city.

“They had to come up with an innovative solution that has not been tried before and present that to a team of judges in a creative and unique way,” explains Nancy Naimey, principal and team coach.

Finally, the students are judged on a set of core values, which include discovery, innovation, impact, inclusion, teamwork, and fun.

“If we didn’t work together, we probably wouldn’t have made it this far,” says Emma.

The St. James team has 12 members, although only 10 are permitted to participate during a competition.  They have met afterschool twice a week since September.

The students chose Solar Bears as their team name, reflecting the theme of their innovation project.

“We started out with light pollution, and we were trying to find solutions to that, but it all came back to solar,” explains Sydney. “We were going to do solar awnings and things like that, and then, we went to the solar bears. It’s like a Roomba, but it collects solar energy.” 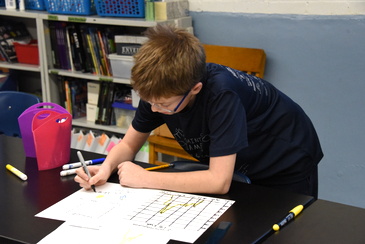 The students’ concept is that solar bears made in three sizes – the papa bear, the mama bear, and the baby bear -- would collect the sun’s rays and then discharge the energy. The baby bear would power small devices like phones, while the mama bear would provide energy to homes.

“The mama bear rolls around in your yard to find the best sun to give back to your house,” says Emma. “It’s through a converter.”

The papa bear, meanwhile, described as a self-driving cart, would provide power to a city.

“There would be ramps that are built in the city where they park and collect the sun’s rays,” explains Sydney.

The students researched how the bears might work, contacting the Biddeford mayor, as well as Gifford Jenkins-Davis from ReVision Energy.

“He gave us a lot of advice, things about how much it would cost and what the angle for the solar panels would be,” says Emma.

“The baby bear we made really small. We kind of had a thing on the back like a charger port. Then, the mama we made slightly bigger, with like wheels on the bottom, so she could roll around,” explains Colin Cleary, a fifth grader. 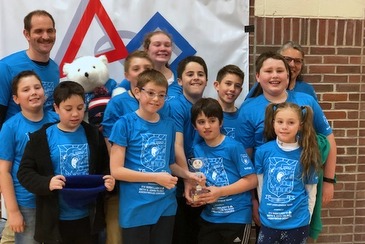 For their presentation on their project, the students decided to create an infomercial.

“We talk about why you should buy it. Who should buy it and how much it costs,” says Sydney. “We also have a dance number at the end that Emma and I did.”

Sydney also designed a T-shirt for the Solar Bears team.

“It has the team name, the sun, and a polar bear,” she says. 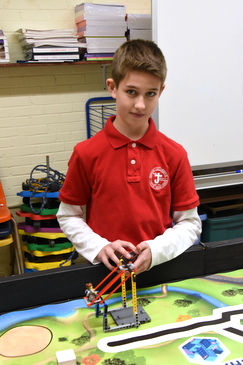 The St. James students may participate in any aspect of the project, but they have their preferences.

“I like doing the skit a lot. That’s really fun,” says Parker Plourde, a seventh grader.

“I like the robotics,” says Hunter Stearns, a sixth grader.

“I like building the models, not the robot models, but the other ones that we show the judges,” says Aiden Leighton, also a sixth grader.

Being on the team means a lot of hard work, but the students say they enjoy it.

“It’s really fun,” says Prescott, who is in the fifth grade. “I like building with LEGOs and just making almost anything from small bricks.”

“I enjoy programming, hanging out with the team, and having fun,” says Henry.

“It’s fun because I get to hang out with my friends afterschool,” says Collin. “You’re really just building LEGOs and doing a bunch of amazing stuff.”