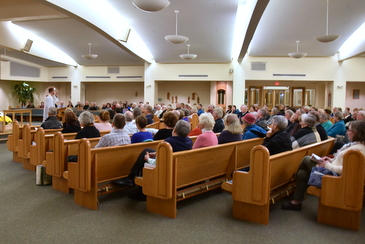 Why would you want to settle for less when a life with God promises so much more?  That was among the questions posed and thoughts shared by Father Brian Wayne during a mission held at St. Bartholomew Church in Cape Elizabeth this October.

The mission was organized by Cluster 22 parishioners who were seeking to reinvigorate their three parishes -- St. Bartholomew, St. John and Holy Cross in South Portland, and St. Maximilian Kolbe in Scarborough -- in the wake of recent struggles and declining Mass attendance.  From bakers to cantors, more than 100 people volunteered to help make the mission a reality.

“The parish was hurting, and we wanted a spark,” said Alicia Danielson, one of the organizers. “My hope and the hope of all the people on the committee was to bring everybody back together, hoping that they’ll come back and get more involved.”

“This is something I’ve had in my mind for a long time for this parish,” said Toni Meehan, who attends St. Bartholomew. “I really was so excited when I heard there was going to be a mission, because I felt this was the shot in the arm that the parish needed.”

“I feel that it’s important, given the trying times that the Church is facing at the moment, that we rekindle why we are Catholics, and we get reenergized, because it’s so easy to become discouraged,” said Edward McGarrity, who attends St. Maximilian Kolbe. 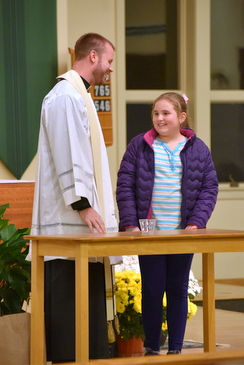 “Missions are really important to basically light that fire again,” said Amanda Meir, who attends St. Bartholomew. “I think it gives everybody a sense of community in the whole cluster.”

The three-day mission was led by Father Wayne, director of vocations for the Diocese of Harrisburg, Pa., who has worked in campus and high school ministry.  Entitled “This is your Mission,” the presentations focused on who Jesus is, what He is not, and how to become His disciple and, eventually, His apostle.

“Our challenge is to make sure our image of God is authentic,” Father Wayne told parishioners. “There is this false understanding that God doesn’t want to be in this personal, intimate communion with us. So that is the image we’re trying to break.”

Father Wayne said that one of the greatest obstacles today is moral relativism, the belief that there is no absolute truth but, rather, that truth depends on someone’s individual feelings.  He said that we are called to think differently.

Father Wayne said that the answers to challenges facing the Church isn’t to become more like the relativistic culture but, rather, more like Jesus. 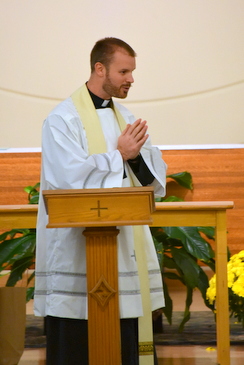 “Whenever the Church is facing crisis, God always raises up saints. He always pours more grace into His Church so that people can live more fully their lives of holiness,” he said. “God calls us to be disciples, to grow in holiness.”

He told parishioners that the way to do that is through prayer, reading Scripture, embracing the Beatitudes, and doing works of charity.

That includes evangelizing others.

“Once we develop a deep relationship with Jesus, we have to bring Him to others,” Father Wayne said.

An estimated 200 to 250 people attended each evening of the mission, with attendance increasing each night.  Even competition from the Red Sox in the World Series and the New England Patriots on Monday Night Football didn’t keep parishioners from coming.

“I was just so excited about it. I just couldn’t wait to hear him. I wanted to be inspired, and I was. He was fabulous,” said Karen Coyne, who attends the Church of the Holy Cross in South Portland. “I’m just going to do everything he said, just every day be committed and do all those things.” 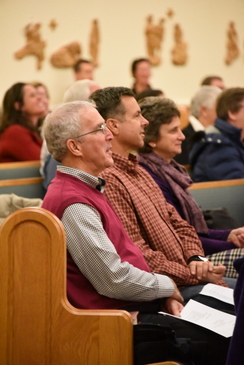 “I think most of us who like to attend these are looking to deepen our relationship with God, and it’s good to get some assistance,” said Linda Dillion, Casey’s mother. “I do pray a lot already, but it’s always good to think outside of yourself and hear other people’s viewpoints.”

“I have three boys who were raised in the Catholic Church, but none of them is attending now, and it was really good for me to hear about how the youth today are really being drawn into this idea of moral relativism and how it’s affecting their lives, and how there really is an absolute Truth, which God is, that has to be brought back,” said Peter Vachon, from St. Maximilian Kolbe.

“A mission is part of the history of the Church, and it has always been a moment to give you a spiritual shot in the arm, and Father Brian was a very good person to do that because of his manner of presentation, and his leadership, and the prayerfulness of reflection,” says Barbara Smith, who attends St. Maximilian Kolbe.

To carry the message of the mission forward, the cluster established faith-sharing groups. Danielson said while sign-ups were initially slow, after the mission, just about every group filled up.

“Right away, we saw that, which was amazing,” she said.

Danielson said she hopes the mission is just the beginning.

“Now, there is a whole group of us who know each other who go to other churches, and I think that is very powerful,” she says. “It gave me hope, and it gave me hope for our cluster.”