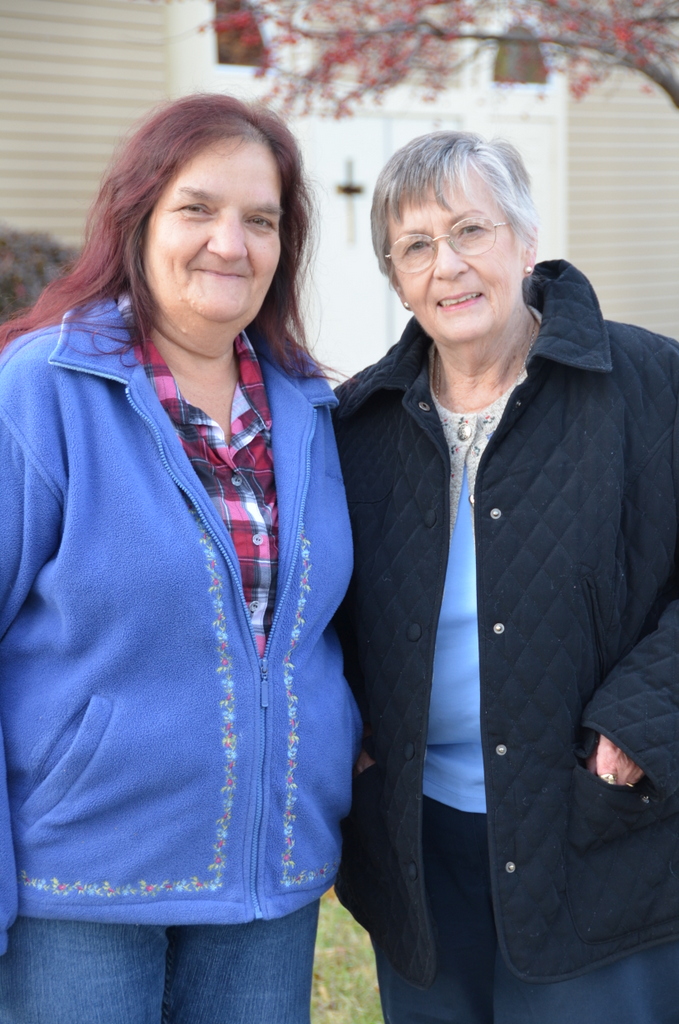 When Pat Lissandrello and Terry Oliver first got together, they both admit to feeling a bit uneasy.

“I was a little nervous. I didn’t know what to expect,” says Terry.

It didn’t take long, however, for them to find common ground.

“I like the outdoors, the ocean, reading,” says Terry.

“And I do, too,” says Pat. “We found mutual interests all along.”

Now, about eight months later, the two describe themselves as good friends.

“It’s a great friendship that will be long lasting,” says Terry.

“It’s mutually supportive,” says Pat. “I just look forward to being with her.”

Terry and Pat first met last spring at the Southern Maine Re-Entry Center, a facility in Alfred intended to help women transition from the state correctional system back into the community.

Terry and Pat were paired through My Sister’s Keeper, an ecumenical, all-volunteer program that provides mentors to women recently released into the community or to those soon to be released. The program works primarily through the Maine Department of Corrections and the Cumberland County Jail.  Referrals may come from staff, probation, faith communities, or the women themselves.

“If a woman is serious about wanting to have a prosocial relationship with another woman, and she has a correctional history, that’s pretty much the criteria,” says Kelly Dell’Aquila, director of the program and a parishioner at Saint Bartholomew, Cape Elizabeth. 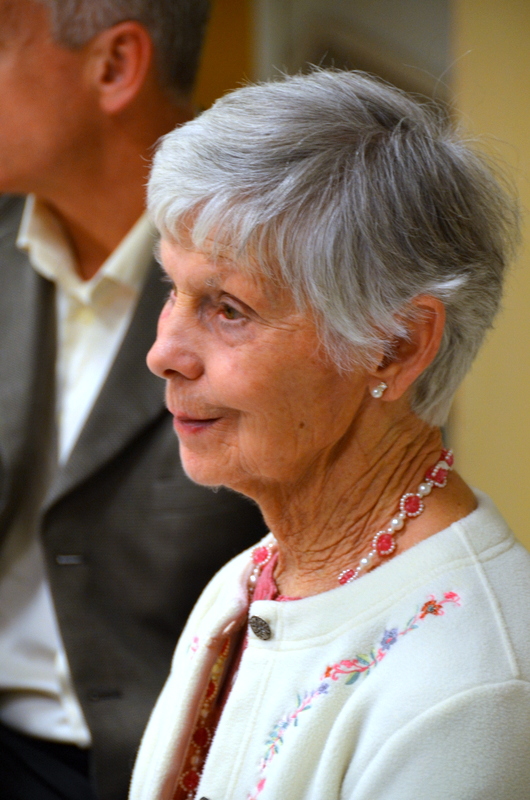 The program was founded 15 years ago by Myrna Cook, a member of the Cape Elizabeth United Methodist Church.  At the time, she was conducting faith-sharing groups at the Cumberland County Jail, during which some of the women voiced their fears about reentering the community.  She brought those concerns to her congregation, particularly the plight of one woman being released who had no place to live.

“Her congregation responded above and beyond what she really needed,” says Kelly. “So, that kind of response really ignited the concept of ‘wow,’ a church could really be a great connection for somebody in reentry.”

While the first needs being addressed were mostly material, such as housing and clothing, Myrna soon started asking individuals to consider becoming mentors to the women. My Sister’s Keeper was born.

“At first, it was hard because it was really thought of as, maybe, a touchy-feely type of ministry. But it quickly became quite respected,” says Kelly. “I think the jail could see that the institution and the faith communities could work side-by-side for the common interests of those reentering.”

Kelly says while they stress that the mentors are not social workers and are not there to “fix” things, she says there are many areas in which they can help.

“Mentors are really instrumental in helping the women follow through and having confidence in either going to those training sessions or learning new things. Mentors accompany women to probation, family team meetings, through reunification,” says Kelly.  “It’s amazing the number of areas that mentors can be present and also have a voice themselves in those arenas. They are looked upon as advocates.”

While My Sister’s Keeper is based at the Cape Elizabeth United Methodist Church, mentors come from many congregations throughout Cumberland and York counties. 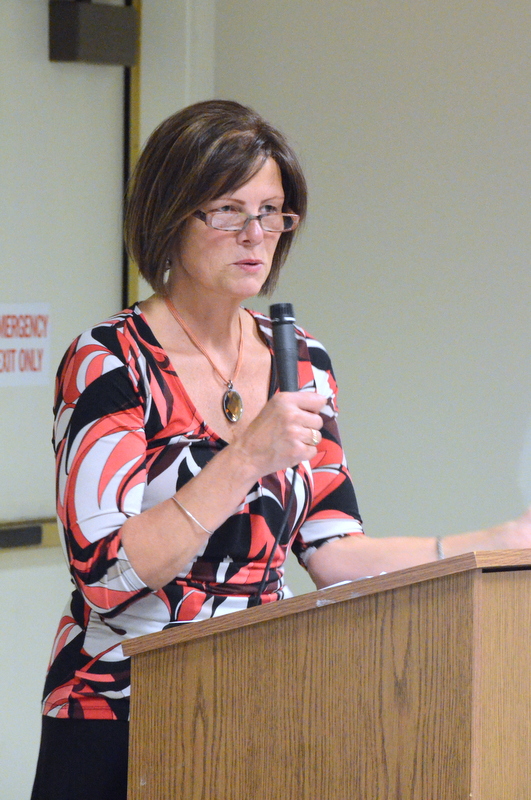 “The Catholic Church and the United Methodist Church where it started have been our biggest supporters,” says Kelly.

Pat, a parishioner at Saint Matthew Parish in Limerick, decided to become a mentor after she attended an informational meeting at Saint Martha Church in Kennebunk.

“I was so impressed with Kelly’s leadership, the other mentors there, and with the sisters, the mentees, and the relationship that they seemed to have with their mentors. I was just really in awe of it and thought it was just wonderful how the mentors, coming from all different walks of life, were able to channel a lot of their skills and abilities into the program. It just seemed it was really working, and I said to myself, ‘I really would like to be a part of this.’”

Terry was approached about getting a mentor while she was attending “Moving On,” a cognitive skills training program at the reentry center.  Kelly was one of the instructors.

“Kelly explained that it was a woman they matched us with, with our interests and things we liked,” says Terry.

“Kelly takes great pride in her matches,” says Pat. “She doesn’t rush to match people. She takes her time.”

Terry, for instance, waited four months to be paired with Pat.

“She made a perfect match. The first time I met Pat, we connected the first day,” says Terry.

They started meeting in the spring, usually once a week. Terry says what she most wanted was to have someone who would listen to her. 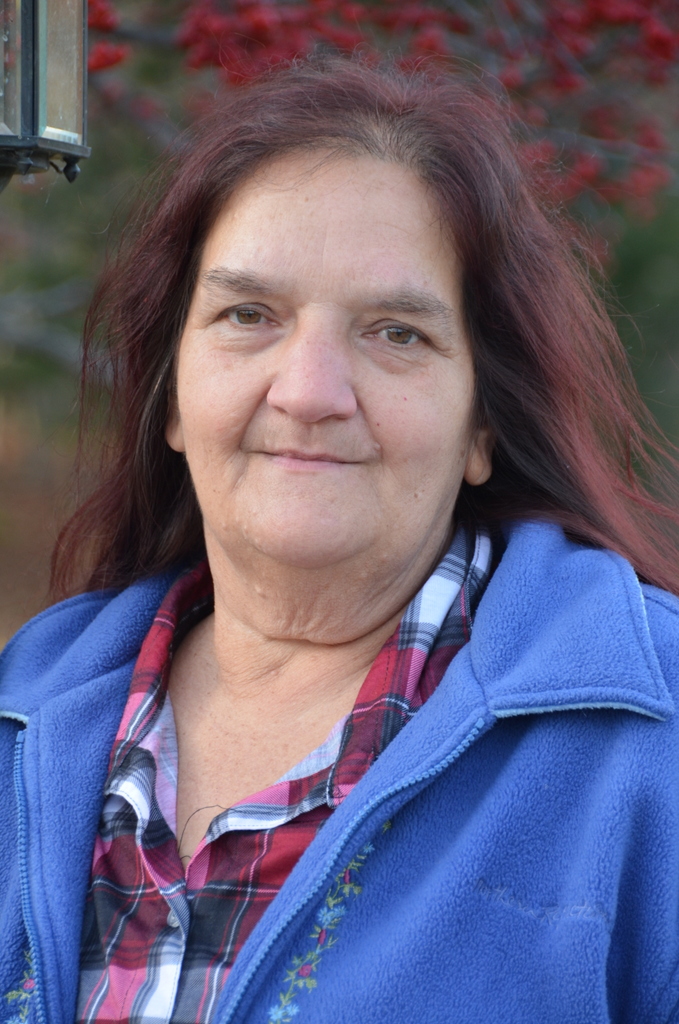 “Because, lots of times, you have things on your mind, and you don’t know who to talk to, and by having a mentor, you can, maybe, if you have a problem, you can say, ‘Well, I’m having this conflict, and how should I do this? Should I do it this way or some way else?’ Because, I’m coming out on probation, and I don’t want to end up back in here.”

Terry says it is difficult to start over after incarceration.

Terry says Pat helped her work through some of those questions and concerns.

“She asked me what I was looking for when I got out,” says Terry. “And I said I wanted to make the right choices, to stay on the right path, and to stay away from the wrong people."

“We talked a lot about not dwelling on the past but projecting to the future,” says Pat.

Terry, who is now out on probation, says that Pat helped her refocus her life.

“We always talk about how it’s going day by day,” says Pat.

“Taking baby steps, one day at a time," says Terry.

“That’s exactly right, one day at a time,” says Pat.

Debby Gentile, who is currently in the Maine Department of Corrections’ Supervised Community Confinement Program (SCCP), knows what that is like.

“There was a time in my life when nobody wanted to be around me, never mind listen to anything I had to say. I don’t want to forget those days, but I never want to go back to them either,” she says. 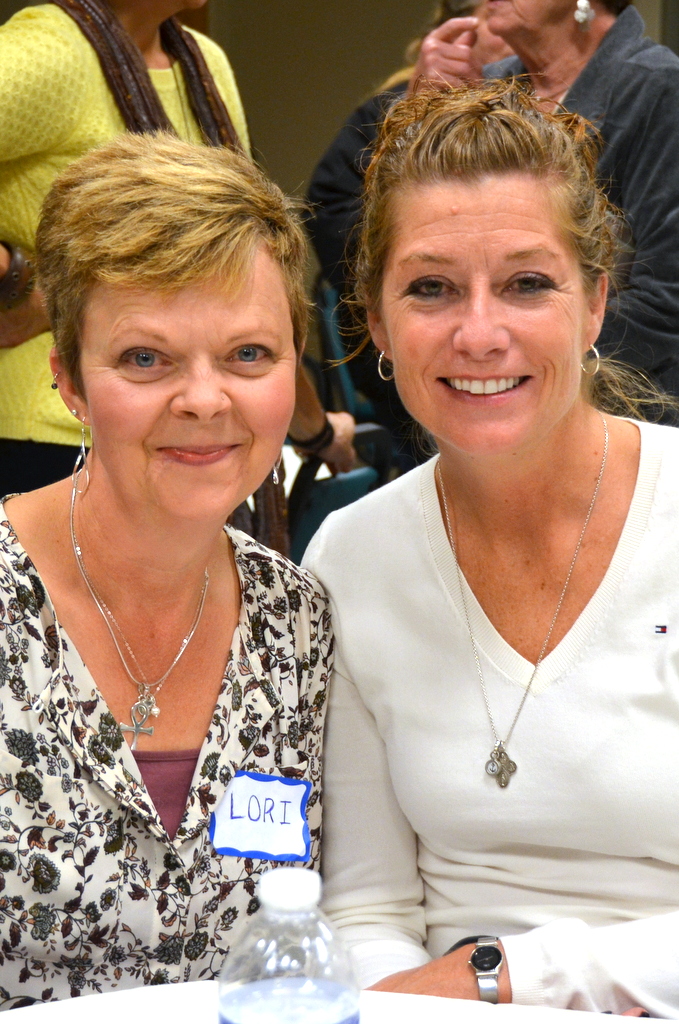 Debby was paired with her mentor Lori Maxwell about a year ago.   As with Terry, she was hesitant at first to join the program but says she agreed because Kelly had made such a positive impression during the “Moving On” program.

“When she first mentioned the mentoring program, I was a little apprehensive. I was shy, insecure, and afraid of meeting new people. But here’s the thing: I knew, without a shadow of a doubt, that Kelly had my best interest at heart,” says Debby.

She says when she first got together with Lori, there were many silent moments, but their relationship strengthened over time.  And, when she was released on home confinement last May, Lori showed up every week to see how she was doing.

“Aside from my family and probation, she was one of the few people I had contact with.  We would go for long walks near my house or sometimes go for a coffee at Dunkin’ Donuts. She would find time to text me during the week just to see how I was doing.”

As time went on, Debby says she became more comfortable both with Lori and with herself.

“She met me where I was – no expectations. And she stayed closed during a period of transition, upheaval, and growth,” says Debby.

Debby is serving time for manslaughter and aggravated criminal OUI in connection with an accident that killed her fiancée.  She says with the help of Lori and Kelly, she has learned to start forgiving herself.

“They believed in me when I did not believe in myself,” she says.

Debby now serves on the advisory board of My Sister’s Keeper and is working to become a peer mentor. She also shared her story during the group’s 15th anniversary celebration.

“This program has given so much to me; it is my honor to give something back to it,” she told the mentors, mentees and others gathered.

Kelly says the program has been successful in helping women to not recidivate, but she says it’s not only the mentees who benefit. 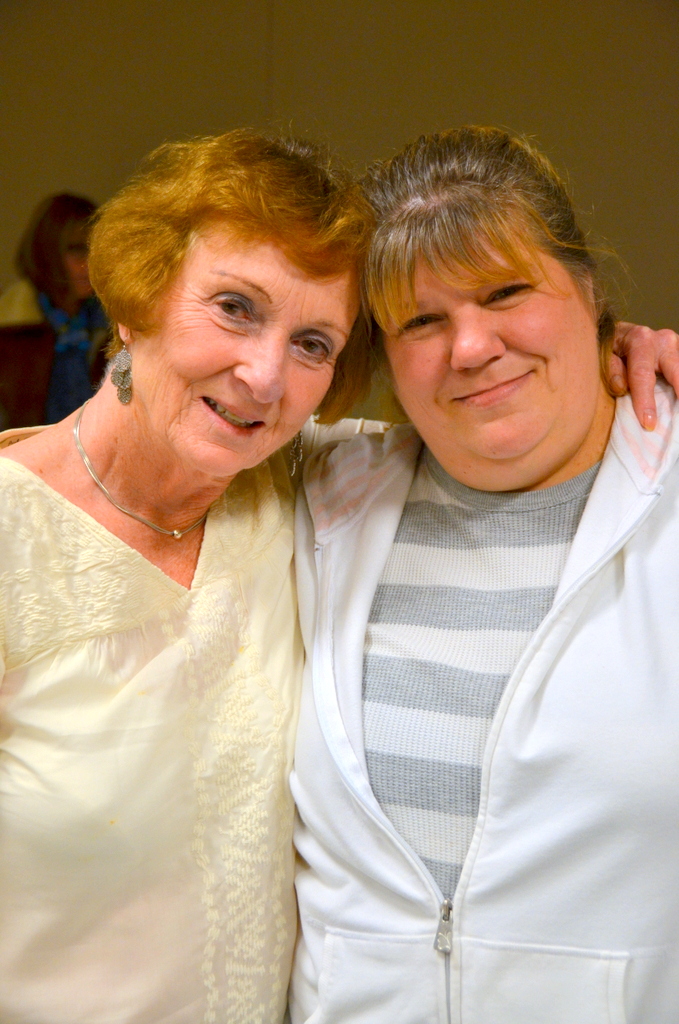 Karen Poore and Stacey Belanger say that is what they experienced in their mentor – mentee partnership.

“She has educated me in so many ways about so many things. It really opened my eyes. Just the jail training alone is an eye opener,” says Kelly.

Stacey says when she first got out of jail, Karen helped her secure her first apartment and accompanied her on doctor’s appointments. When she was hospitalized, Karen came to visit.  When she hit rough patches, she had someone to call.

Stacey says without Karen, she would “probably be drinking and doing drugs.”

Instead, she is doing well, two years after her probation ended.

Karen and Stacey have now known each other for four years. And, although they don’t get together as often as they once did, they remain friends.

“It turned into a friendship. How can you be together for years and just say, ‘OK, that’s it?’” asks Karen.

My Sister’s Keeper is looking for more women who would consider becoming mentors.

Those who have participated say it has been a moving experience. 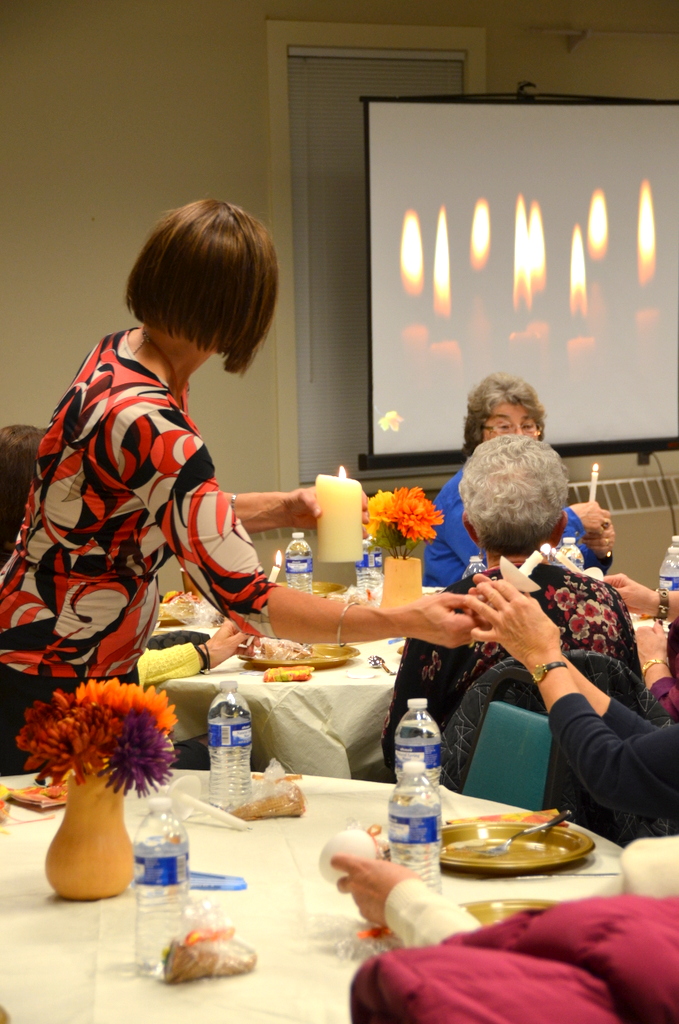 “In some ways, I’ve been touched by all the women of My Sister’s Keeper,” says Lori.

“It is very satisfying to know that I am making a difference to someone, a positive difference,” says Pat. “Personally, the Gospel of Matthew means a lot to me. And to feel that I’m living closer to that Gospel, I find that very, personally fulfilling.”

While the “sisters” don’t need to be part of any faith tradition to participate in the program, Kelly says the ministry is faith in action.

“It really is so much about connection and treating others the way you would wish to be treated,” says Kelly. “For me, when I think about what I know of Jesus, that’s what He did every day. He walked among people. He accepted people where they are at.”

She says she sees the hand of God at work all the time in My Sister’s Keeper.

“There is a greater power than us in this.”

If you are interested in learning more about becoming a mentor, contact Kelly Dell’Aquila at 207.712.5962 or email [email protected].