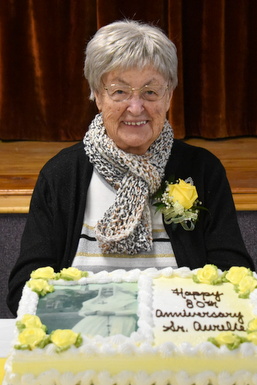 With those words, Father James Plourde summed up the sentiments of many gathered to celebrate the 80th anniversary of Sister Aurelie Michaud’s profession to the Daughters of Wisdom.

“Amazing, beautiful, courageous, devout. We could go through the whole alphabet of adjectives when talking about Ma Tante,” says Peter Michaud, her nephew.

“I’m in awe of everything she has accomplished,” says Don Michaud, another nephew.  “She is just incredible.”

At age 98, Sister Aurelie is recognized as the doyenne of the American Province of the Daughters of Wisdom, its most senior member.

She is also the town of St. Agatha’s oldest citizen, and on the occasion of her anniversary, February 2, 2020, the town declared the day to be “Sister Therese Michaud, DW, Aurelie Day.”

“I’m just overwhelmed,” Sister Aurelie said of all the accolades and attention.

Sister Aurelie, whose birth name is Therese, professed her first vows with the Daughters of Wisdom on February 2, 1940, when she was 18 years. Now 98, she has spent four decades caring for others, often those most in need. She taught children with developmental delays, treated children with polio, and cared for those with AIDS. 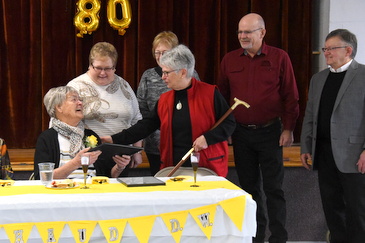 Her sense of duty and call to service comes from a deep love for God, one that goes back to her upbringing in Saint Agatha, where prayer and attending Mass were part of family life.

“We used to pray every day,” she says.

She came to know the Daughters of Wisdom while attending St. Agatha High School, which was then located in the Daughters’ convent.

“I had Daughters of Wisdom as teachers, and I loved them,” she says. “They were all number one.”

Still, being quite shy, Sister Aurelie says she may not have become a Daughter of Wisdom if it had not been for a friend who was planning to enter the order and urged her to also join.

“I prayed a lot about it, and that is how decided,” she says.

Sister Aurelie went to Ottawa, Ontario, where she learned of the sisters’ call to follow the path of Divine Wisdom. When she professed her vows, she took as her religious name the feminine version of Aurel, the name of a younger brother who died of meningitis at age 14. 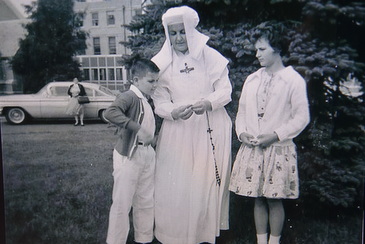 She says, however, that she never really felt called to teaching, and she embraced the opportunity to switch to nursing, something she had always wanted to do.

“I just loved to be a nurse, to help people,” she says.

After training, she returned to Port Jefferson to work at a residential orthopedic hospital, where she treated children with polio, a highly contagious disease, during the epidemic of the 1950s.

“She always took risks.  She worked with people who needed her most. She was working with polio patients in the 1950s even though her own brother (Camille) died of polio,” says Peter.

“I loved to take care of the children, and of course, because I was big and strong, they put me in the boys ward. We had a ward for boys, and one for girls, and one for babies and very small children,” she says.

Sister Aurelie worked at the hospital for 20 years, then served as a nurse to elderly sisters in New York before returning to her hometown, where she did parish work and served as a visiting nurse. It wouldn’t be long, however, before she was on the move again, this time to serve in a health clinic in Appalachia, West Virginia.

“It was really nice to take care of these children. They had nothing, nothing, nothing. They lived in old shacks,” she says. “We were in the boondocks. I used to be the last one to go to work, and I had to drive, and there were mountains. I didn’t like the drive. You had to be careful.”

Sister Aurelie then took on a new challenge. A young man whom she knew was opening a family shelter in Uniondale, N.Y., and asked Sister Aurelie to serve there. Working with sisters from other communities, she calls it one of the most faith-filled experiences of her life, showing her the true meaning of hospitality.

“I just loved it there,” she says. “There was something about it that was making me closer to God.”

She says she also felt the closest to the Daughters of Wisdom she had ever been, even though she was living and serving with sisters from other communities.

“I was perfectly at home with those sisters, living in community with other communities,” she says.

When the founder of the shelter also started a home for those with AIDS, Sister Aurelie began volunteering there as well.

“It was very hard,” she says. “We had some who passed away.”

“This was in the 1980s when we didn’t know anything about AIDS. It was a very scary thing, but she went ahead and did it,” says Don. 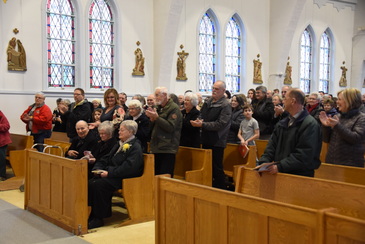 At age 70, Sister Aurelie’s service to others was not yet over.  She became the coordinator for elderly sisters in Bristol, Conn., then returned to Maine, where she volunteered at the Wisdom Center in Lewiston, working with economically disadvantaged women and youth. She fondly remembers teaching them crocheting and knitting.

“They loved to do that because they would make themselves a hat or mittens or something,” she says.

Sister Aurelie returned home to Saint Agatha in 2008 and now lives at an assisted living facility in Madawaska, where she still leads the Rosary and shares the readings when communion services or Masses are held there. She says God remains close to her heart, a place He has been throughout her life.

“God means everything to me,” she says. “I pray to God that He opens the door for me when it’s time.”

To celebrate the 80th anniversary of her profession, Sister Aurelie was honored during a Mass celebrated by Father Plourde at St. Thomas Aquinas Church in Madawaska, where she received a standing ovation from parishioners.

“Thank you for your witness, for your ministry,” Father Plourde said. 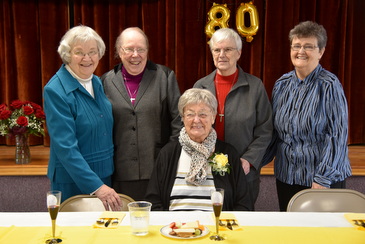 A reception that followed brought together fellow Daughters of Wisdom, generations of her family, and longtime friends.

“I appreciate her very much for her dedication,” says Judy Ayotte Paradis, a former neighbor. “She has been a role model.”

“She is really my model for what a nurse should be,” says Peter. “I went to nursing school later in life, and I always kept her example in mind.”

Sister Aurelie also received many congratulatory letters, including ones from Bishop Robert Deeley and Sister Cathy Sheehan, D.W., provincial of the U.S. Province.

“God’s call is gift and so too is the response of any woman so called,” the bishop wrote. “Your ministry certainly enhanced the lives of many of the most vulnerable people in our society.”

“We seek to bring the message of Jesus, Incarnate Wisdom, to people experiencing injustice, violence, poverty, and oppression, especially women and children. This mission is your life,” wrote Sister Cathy. “We are so proud to call you our Sister!”