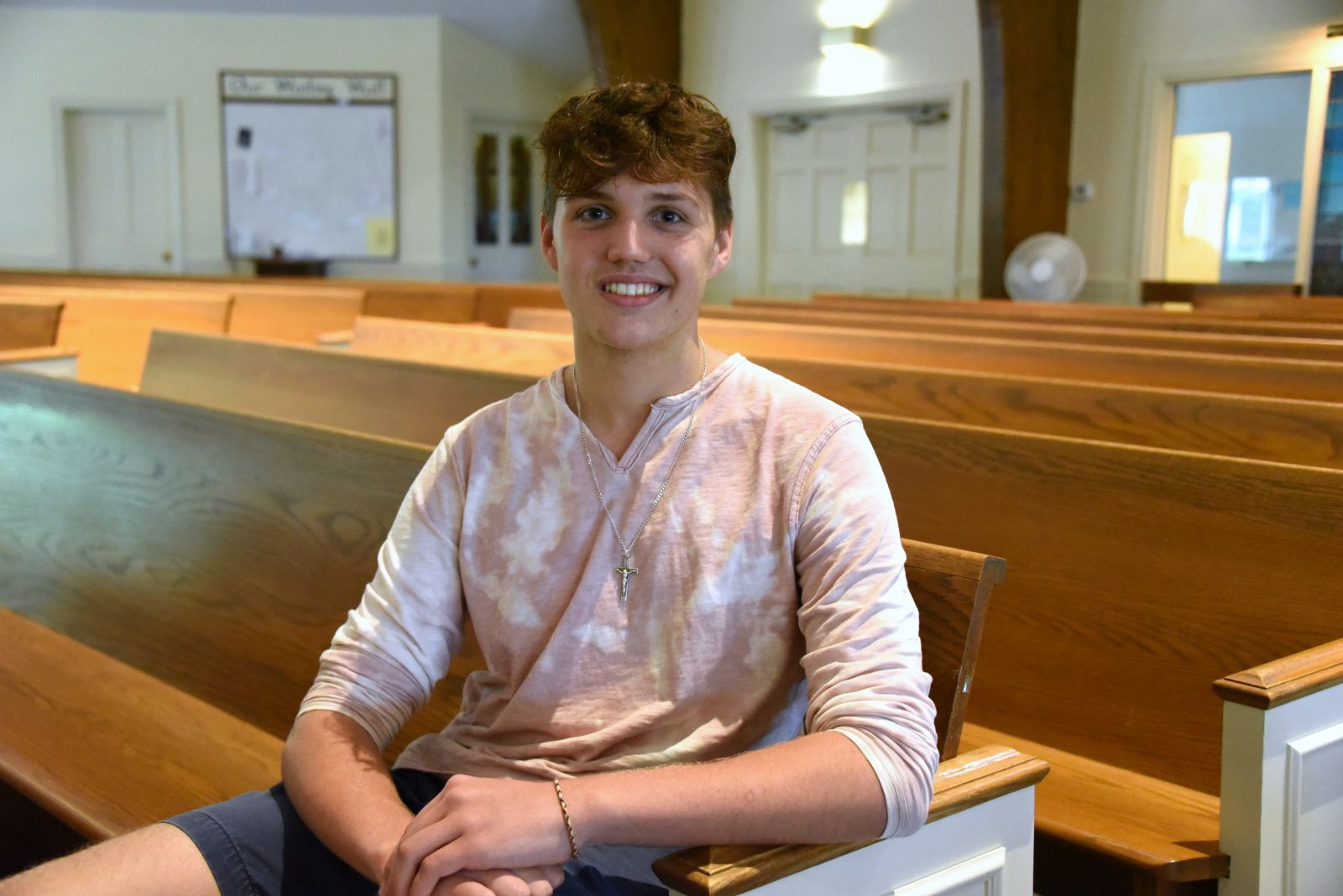 With work schedules and household tasks, keeping holy the Sabbath day may, for many, seem like an elusive desire, despite best intentions. But for 18-year-old Colby White and his family, Sunday has always been a time for faith and family.

“You have that one day in the week to relax and to be with God,” he says. “It’s just a very important tradition in my family. Every Sunday, we go to church in the morning, then straight to my grandma’s house, and we’re there all day. We eat, and we sit, and we think, and we pray.”

Colby says setting that day apart keeps him grounded and helps him to keep his priorities in order.

“It allows me to build my character and to just have morals,” he says. “Every week, I’m reminded that I have a family who loves me and a God who loves me.”

Colby says he can count on one hand the number of times in his life that he has missed Sunday Mass. When it came to finding a job, he says he made sure it wouldn’t include working on Sundays.

“I made it clear, especially to my boss from the beginning, that Sundays are something that I just don’t do, and it’s always been respected,” he says. “It’s just how it’s always been.”

Colby says faith has been at the center of his life for as long he can remember, something he attributes to his upbringing. His mother, Lisa, is a cantor at Holy Spirit Parish in Wells, and Colby says he grew up singing church hymns with her at home.

“We had a very musical, religious family growing up, so I would say that is kind of how my spiritual journey started,” he says.

Prayer is also a regular part of family life.

“Pray before meals. Pray before going to bed. We were taught the Rosary,” he says.

Colby says he suffered from social anxiety when he was younger and discovered that prayer was the answer to keeping him healthy and happy.

“It always helped me to pray and reflect and sort of find that time in the day to really talk to God as a friend,” he says. “That’s why I am the way that I am, because I believe that God saves.”

Colby says his personal relationship with God has grown even more in recent years. He points to being homeschooled during junior high and then to going to Cheverus High School in Portland.

“Going to Cheverus, there are obviously a lot of things that you do to help you grow in your faith,” Colby says. “There are the retreats every year, and there is Mass on the holy days, so that helped keep my faith central in my life throughout.”

Especially powerful, Colby says, was Kairos, a retreat he attended with classmates in November 2020 at the start of his senior year. He describes it as a pure, loving experience.

“You really just open your heart to God, release all sort of apprehensions that you have, and learn to become purely vulnerable,” he says. “The retreat was just such a powerful experience because you find that there is good in everyone, and most importantly, you realize there is so much more good in yourself than you thought that you could ever find, and it’s all because you’re putting your trust in God, and you’re reflecting, and you’re letting Him help you pave the journey.”

Colby graduated from Cheverus with a 4.0 average and was also active in sports and other extracurricular activities. He was on the alpine ski and lacrosse teams, was a member on the Spanish Club, and was involved in performing arts and the choir, which led to his participation in the Maine Music Educators Association’s BOC All-State and Jazz All-State music festivals. He also participated in a Portland immersion project aimed at raising awareness about socio-economic issues in the local area. 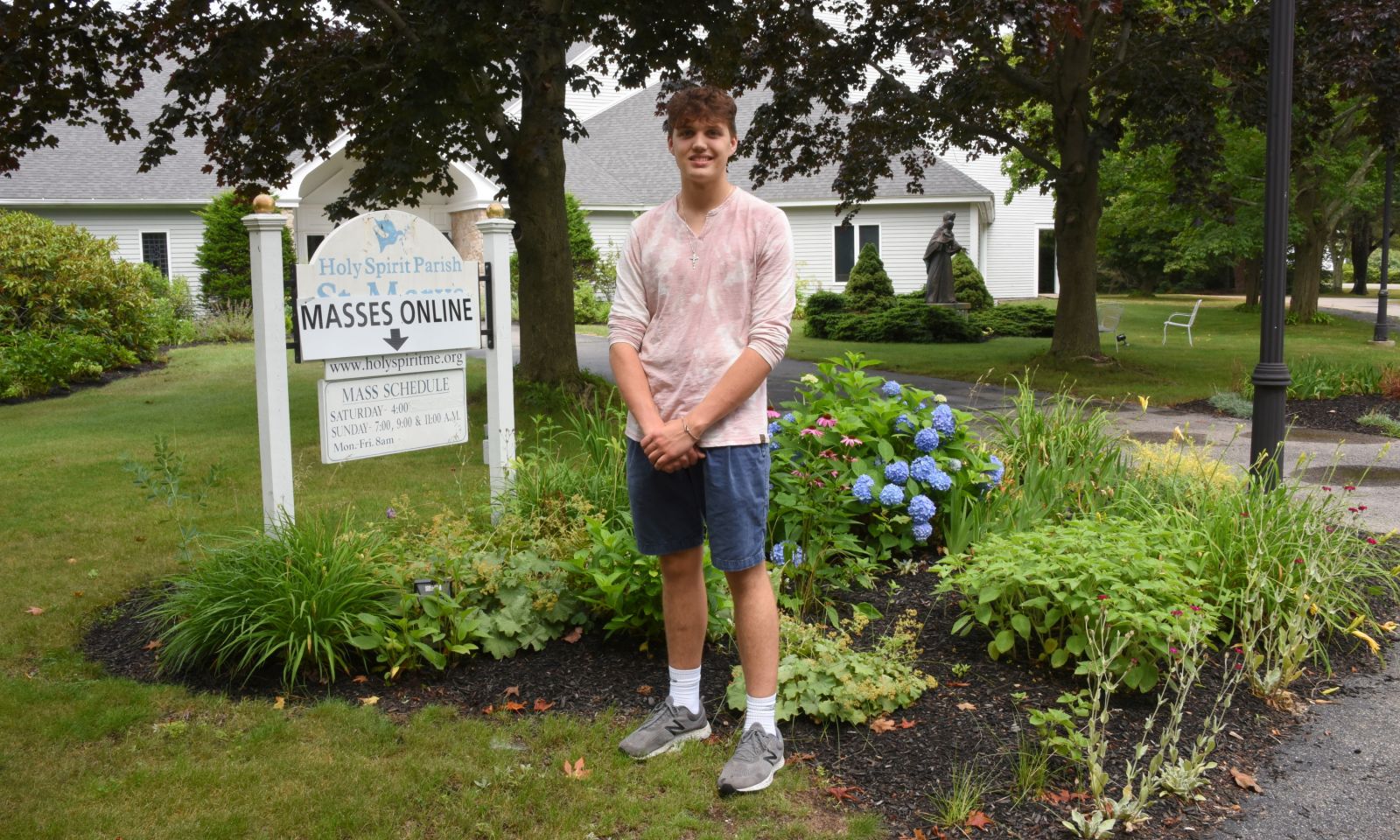 “We went into the Portland community and volunteered at Preble Street. It just brought awareness to the different problems that occur in the community,” Colby says.

Serving those in the community is something Colby says he keeps as a priority, despite his busy schedule. He says he believes it to be an important part of what it means to be Catholic.

For his senior-year service project at Cheverus, Colby volunteered at the Morrison Center in Wells, a non-profit that provides individualized support services to children and adults with developmental disabilities.

“I was doing a bunch of things: being one-on-one with the kids, doing yardwork, and doing housecleaning,” he says. “It was a really powerful experience, just because you count your blessings after being face-to-face with these children who have so many problems. It’s so devastating to see them struggling and to see them in pain from something that we see as so easy, like walking.”

Colby has also participated in two mission trips. In 2016, he and other teens from Holy Spirit Parish Youth Ministry went to Maggotty, Jamaica, where their service work included painting a church, repairing a shipping container, and putting on a Vacation Bible School for kids. In 2018, he and his mother joined a group going to Cuilapa, Guatemala. There, they cleared a field that was to be the site of a new Catholic school, put together stoves for families who had been using outdoor firepits for cooking, and played with children from a Mayan community.

Colby says he was struck both by the devastation he saw but also by the fact that, despite their suffering, people showed such gratitude for what little they had, a lesson he says has remained with him.

“Never take anything for granted and always be appreciative of what you have, rather than always wanting something more. Live in the present. Live with what you have, and just thank God for it and praise Him,” Colby says.

Another rewarding experience for Colby has been his involvement in youth ministry at Holy Spirit Parish, which has brought him close friendships as well as opportunities to serve the Church and the community.

“I feel like it’s really a way to reflect on your week, honestly, just to be with people who you love and to talk about God. You don’t get to do that anywhere else,” he says. “It’s really relaxing, just a good time.”

Colby has long been a crew leader at Vacation Bible School put on by Holy Spirit Parish. He has sung for special liturgies at the parish, and through youth ministry has participated in Living Stations of the Cross during Lent, put together care kits for those who are homeless, and made Easter cards for seniors in assisted living. He also regularly volunteers at the free Matthew 25:35 meals served monthly at St. Ignatius Gym in Sanford by teens from Holy Spirit Parish and St. Thérèse of Lisieux Parish in Sanford.

At the meals, Colby helps to set up tables, prepare the food, and clean up afterwards, but he says what he enjoys most is talking with the guests.

“Letting myself just be someone for them to talk to because you can tell that a lot of them don’t get out too much and don’t have people who listen to them,” he says. “I like to connect with other people, and that is just one way of doing it.”

Katie Shellene, youth ministry coordinator, says Colby has a way of making everyone feel welcome, whether it’s those enjoying the Matthew 25:35 meal or those attending youth ministry sessions.

“Colby always makes everyone feel included, whether virtual or in-person,” she says. “Colby brings love and laughter to our parish and the high school class.”

Colby says he understands the importance of making others feel welcome because it is something with which he struggled as a child.

“You always hear that you should treat people the way you want to be treated. And I always love it when people welcome me, so why not be that light for another person?” he says. “I like to be a welcoming spirit.”

For the way he lives as a disciple and shares his faith with others, Shellene nominated Colby for a St. Timothy Award, the highest recognition from the National Federation for Catholic Youth Ministry that a diocese may confer to a high school junior or senior. Colby was among seven teens from around the Diocese of Portland to receive the award this year.

“Colby brings love and laughter to our parish and the high school class. He is proud of his faith and willingly shares it with others. He is truly a person for others,” says Shellene. “He often invites friends from outside the church to attend our classes, the Matthew meal, and other parish and youth ministry activities. His confidence in his faith, along with his easygoing, welcoming spirit, has impacted many people.”

Colby admits it’s not always easy to talk about his faith with others, but he hopes being a good witness to the Catholic faith will lead others to want to learn more.

“If you show others that you’re a good person in a sense, they’re going to be curious, and they’re going to start to ask you why you are the way you are. I find a lot of times people just ask me how I was brought up,” he says.

Colby will attend Suffolk University, based in Boston, Mass., beginning in late August. However, through the university’s Freshman Year Abroad Program, he will start his studies in Spain. He plans to major in marketing and minor in Spanish.

Colby knows that will mean he will be away from his home and school routines for the first time, but he says he is confident his faith will remain as strong as ever. He points out, for instance, that there is a cathedral just five minutes from his dorm.

“Obviously, there is going to be the college environment, but I believe I have had a good enough upbringing to stay true,” he says. “Now, that I, myself, have gone through my own, personal spiritual journey, I just know what makes me feel like a better person. I know what makes me second guess my decisions, so I feel like I’ll be alright.”