A Daughter of God 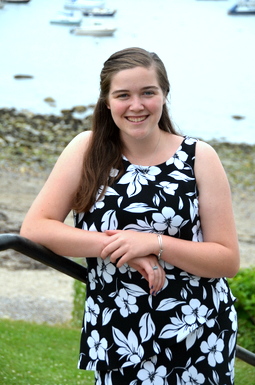 Ashley Pezanowski loves to figure skate, is an avid Disney fan, and is studying to be an electrical engineer. This summer, the 18-year-old from Rockland was also a sea princess during the Maine Lobster Festival, a longtime tradition in her hometown.

“I’m learning a lot more about lobsters than I did before,” she says.

Ashley’s schedule is packed with work, studies, service, and sports, but she says there is no doubt what comes first in her life.

Ashley says she has always been blessed with a belief in God and a desire to learn about her faith.

In fact, Ashley’s mother, Lori, says it used to be her daughter who would convince her to go to Mass, not the other way around.

“I laugh because she would say, ‘Mom, let’s go to church.’ And I would be, like, ‘I want to sleep in today,’” Lori says. “She is really the reason our family’s faith is so strong.”

“My mom didn’t know too much about the religion, but I was always very excited to go to Sunday school and made sure I went every weekend, and then, I would share my faith with her,” Ashley says. “There was always something about it that just made me really excited, and I loved learning in those type of situations. It made me really happy.” 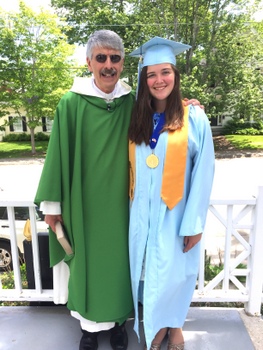 As soon as she made her first Communion and was confirmed, Ashley asked to become an altar server. She continued serving right through high school.

“Being a part of the Mass is fantastic. I love it so much. Altar serving is one of the great things to happen to me,” she says.

“Some of the Life Teen events that we started off with when I was in eighth grade just really got me growing into it,” she says.  “I didn’t grow in in theology, but my faith just kept growing and growing.  I guess I learned more through example.”

Her youth ministry experiences prompted her, the following year, to attend New Evangelization Week (N.E.W.), which is open to those in ninth through twelfth grade. Offered by the diocese’s Office of Lifelong Faith Formation, N.E.W. brings together teens from throughout the diocese for a week of workshops, prayer, Mass, and fellowship, intended to help them to become better disciples and evangelizers.

“It just opened my eyes to see how Catholicism is supposed to be,” Ashley says. “In the first track, you learn about your faith, and since I still didn’t have a fantastic baseline, it was really great to learn about it. And then, learning how to talk to other people was really helpful, since I’m a public high school student, and it can be difficult to talk to people and have them actually want to listen to you.”

Ashley says N.E.W. reinforced that it is possible to be a teenager and live your faith.

“That it’s even more possible to do it, that it’s not impossible,” she says. 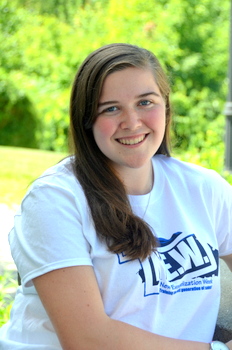 And it changed the way she viewed God.  No longer was He someone distant and to be feared.

“It’s given me so many tips and opened my head to really changing my relationship with God,” she says. “I was scared, and now I’m more open. And He’s my Father. So now I can say, ‘Oh, Daddy, please help me this,’ and ‘Thank you for that.’  It’s changed my way of thinking about everything.”

“I really love being so close to the Lord and being able to sit in a room with Him,” she says.  “Of course, you feel like God is with you all the time, but when you’re sitting in a room with the Eucharist, it’s like He’s actually there.”

Ashley, who attended N.E.W. each of the five years she was eligible, describes the retreat as one of the best experiences of her life.

“You’ll meet the greatest people there,” she says. “It’s one of the most welcoming places, and you feel like you’re home.  You feel that you’ve come home.”

This past year, as a high school senior, she also joined the diocesan Catholic Youth Leadership Team (C.Y.L.T.), which helps plan youth events such as the annual convention.

“I really enjoy planning things and being part of events, so I felt it was a perfect situation for me,” she says.

As with N.E.W., it led to close friendships.

“The people are fantastic and make you feel so welcomed and loved. It’s truly where you feel you belong, and they’re fantastic examples in their own lives,” she says. “My best friends are through C.Y.L.T. I have one down in Biddeford. I have some up in Houlton, some in the Augusta area.” 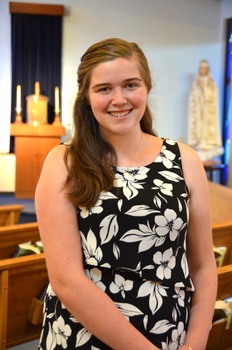 Ashley says those friendships have proven invaluable because she hasn’t been able to make those same Catholic peer connections in her own community. The teens who were part of her youth ministry group were all older and have moved on, and the parish’s youth ministry is just starting to find its footing again.

“It’s hard, but since I have all my friends from N.E.W. and C.Y.L.T., I’ve really just kept in touch with them. Seeing their example has helped me to continue and to become my own person. I would say their support is what has gotten me through.”

She communicates with them a couple times each day, most often through Snapchat. “Since we don’t live near each other, I can send a photo and show them what I’m talking about.”

As for her friends in her home community, she says, although they may not share her beliefs, they accept her for who she is.

“We know that we have different beliefs, and they say, ‘O.k., I’ll let you believe your beliefs, and I’ll believe mine.’ I might get a look now or then, or I might get a ‘What?’ But I don’t mind because I know it’s what I’m supposed to do, and it just feels right.”

Ashley says she tries to set a positive example for those around her.

“I want to show others what it’s like to be a Catholic,” she says. “I try not to gossip about people. I try to be as nice and caring as I can, living the Catholic beliefs, I guess you could say. I’m not going around swearing all the time. I’m trying to keep as clean living and as chaste living as I can.”

She is also active in her community.  She has participated in a youth fast to raise money for the Rockland District Nursing Association, an organization that helps seniors stay in their homes regardless of their ability to pay. 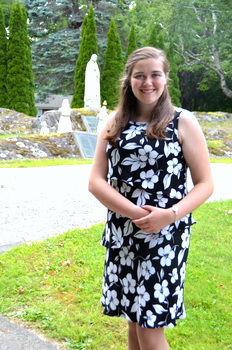 “We take donations for them, and we get sponsors, and during the fast, we do community service. This year, we went and we danced at one of the homes,” says Ashley.

She also has participated in the annual Walk for Wishes, which raises money for the Make-a-Wish Foundation.

“I think it’s a great organization to help the kids out,” she says.

She was also a member of her high school’s Key Club, serving as president during her senior year. The group’s community service work included everything from raking leaves, to teaching seniors how to use computers, to volunteering at the Special Olympics, something Ashley has done for five years.

“I started off doing that in middle school because I played in the band, and so we played for them, and then, once I got into high school, I switched to doing it for Key Club and also doing it for National Honor Society,” Ashley says. “I did the shot put this year. I ran the event. It’s really fun seeing the kids light up when they get to throw.”

Ashley says it has been fun, too, to have had three little brothers through Big Brothers Big Sisters of Mid-Maine.

“I really love that as well, being able to spend time with the kids and play with them,” she says. “I don’t have any siblings myself, so I enjoy being able to have a younger sibling.”

Ashley has also been active at her church. In addition to altar serving, she has taken part in the Souper Bowl of Caring, a Super Bowl Sunday fundraiser, and she has set up her church’s Christmas gift tree.

“I really enjoy being able to help others, which I know is a pretty cliché answer, but it’s really great to see that you actually are making an impact on people,” she says.

Lori says her daughter has always reached out to others.  She recalls that even when Ashley was in the first grade, she asked if she could help the younger children with crafts during religious education classes. 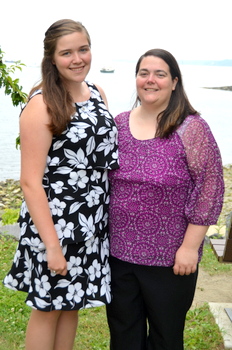 “Even as a child, if there was one piece of cake, she would always give it to a friend.  She might not have wanted to do something, but she would do it for a friend. It was just the self-sacrificing part of it,” Lori says. “She has that kind of compassion. She loves others.”

Ashley’s increasing faith led Lori to evaluate her own faith life. She had left the Baptist Church after the eighth grade and didn’t practice any religion until she converted to Catholicism when she was pregnant with Ashley.  She says, while the Catholic Church was where she felt most at home, it was only through Ashley’s example and through accompanying her daughter to youth events that she came to fully embrace Catholicism.

“When she started having her conversion and learning about her faith, she really taught me what faith was all about. She had such a love for God,” says Lori. “And it was through the youth that I first went to adoration. That was just breathtaking to see all the teens at adoration.”

When Ashley recently spent a year studying in Poland, a trip for which she fundraised, Lori decided to take a theology class. She says the lessons, led by Drs. David and Angela Franks, were “the best.”

Ashley’s example is having an impact on other family members as well.

Ashley is now heading to the University of Maine where she is looking forward to campus ministry and connecting with other faith-filled students.

“I signed up for the emails already,” she says. “I went to Accepted Student Day, and I said, ‘I want to relax my first semester, get used to college.’ And, I saw figure skating and the Newman Center and I said, ‘Those are the only two things I need.’”

Although Ashley will be studying electrical engineering, she is not ruling out a religious vocation.

“I’m discerning. I’m not closing any doors,” she says. “We’ll see where God brings me.”

Wherever that is, she says she’ll approach it with faith and in trust.

“Knowing who you are in God helps give you more confidence in that you know who are, and you can be more self-assured because of it,” she says. “You don’t have to worry because you know that He loves you.”