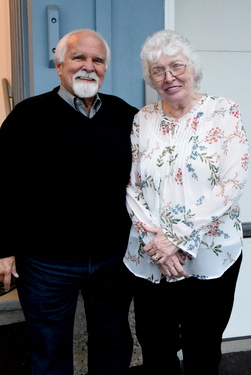 “It’s a feeling of loss, of wondering what is going to transpire.”

Lee and Millie Noddin of Lewiston know the pain of having a loved one behind bars.

“We love our grandson a lot, and when he went away to jail, it just, I don’t know, it just took a section of our life away,” says Lee.

Rose Dubay of Poland knows that feeling as well. She has a son in prison.

“It’s important for people to realize that even though their child or friend has to go to prison, they’re not the only one who goes. The families also go,” says Rose.

Among other things, they say there is a stigma surrounding it.

“When you have someone in the family who is incarcerated, you feel kind of like a social outcast in the community. It’s not a good thing. You don’t really want anyone to know,” says Millie. “You feel terrible about it.”

There was a time when Rose wouldn’t even talk about it.

“My son had been in prison for about 15 years in Texas, and no one up here except my husband and his father knew about it. I was holding it inside, and that’s not a good thing to do,” she says.

Rose decided to seek out a support group, a place where she could let some of those bottled up emotions out.  To her surprise, she couldn’t find one.  Then, she happened to read about the work of Bruce Noddin, Millie and Lee’s son, who heads up the Maine Prisoner Re-Entry Network (MPRN), an organization working to reduce Maine’s recidivism rate.  She decided to give him a call. 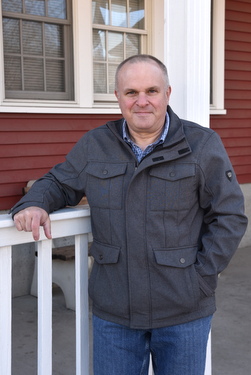 Having made many contacts through his work with MPRN and in jail ministry, Bruce promised to check it out. He soon learned that Rose was right.“I called all these folks around the state and sent emails, and everybody came back and said no, nothing exists,” he says.  “But the other thing that happened with it was, everyone said, ‘Oh, my gosh. That’s a great idea.’”

Already deeply involved with MPRN, Bruce decided he would make it happen.

“So, I called her back, and I said, ‘Well, Rose, it doesn’t exist, and we’re going to work on trying to get this to happen,” he says.

“It surprised me how quick it was. He said, ‘We’ve got it. We can start next month,’” she says.

Bruce named it after the woman who inspired it.

“I’m honored,” says Rose. “I didn’t expect it at all. I just wanted a support group where I could go, and I could share, and I could listen, and I could cry, and I could laugh and know that we had something to laugh about once in a while.” 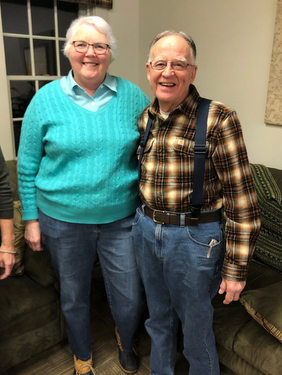 And that is what she and many others have found through Rose’s Room.

“We share what’s been happening, kind of the things that only folks who have family members and loved ones incarcerated can relate to,” says Bruce, whose son, Millie and Lee’s grandson, is in the Maine State Prison.

The program was designed using Alcoholics Anonymous and a hospice support group as guides.

“We understand that there is an anonymity there, that we’re there to share. What’s said here stays here,” says Bruce.

“We go around the meeting, and everybody introduces themselves and says why they’re there, talks about their incarcerated loved ones and so forth,” says Lee.

They say they found support and understanding right from the start.

“We have such a commonality that we’ve become a family,” says Millie.

“We definitely, definitely are family. We hug. We laugh. We cry,” says Rose. “Oh my gosh, I look forward to it.”

“I particularly like the support around somebody who is crying and having a really, really hard time. Everybody just wraps around them,” says Bruce.

Some of the common issues they say they share are the anxiety of not knowing how their loved ones are doing and the math they say they all do in their heads. 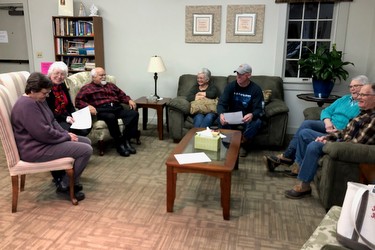 Although the meetings are not intended for those who have been incarcerated, they sometimes attend, providing the families with valuable insight.

Millie, for instance, says she has often wondered whether her grandson cared about them and the crimes he committed.

“They changed my outlook on that,” she says. “Those who had been previously incarcerated said, ‘No, we really feel badly for things we’ve done. We want to get back in the good graces of our families.’”

The Rose’s Room attended by the Noddins and Rose meets monthly at St. Michael’s Episcopal Church in Auburn.  They say as many as 20 people have attended.

Since the first Rose’s Room was established in May 2018, the program has blossomed. There are now Rose’s Rooms in Bridgton, Farmington, Lewiston, Rockland, Westbrook, and a newly opened one in Winslow. 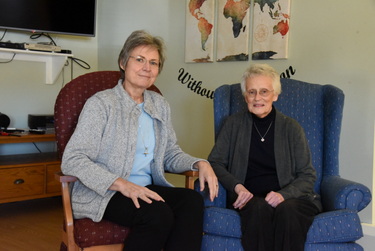 Sister Judy Donovan, CSJ, and Annette Rioux, the driving forces behind the Winslow Rose’s Room, say when they heard about the program at a prison ministry meeting, it instantly resonated with them.  Sister Judy, the provincial of the Sisters of St. Joseph of Lyon, offered the use of the St. Joseph Center, while Annette agreed to facilitate the meetings.

“We really didn’t plan any of this. It’s really God,” says Sister Judy.

“It’s just consistent with where I believe God’s mercy has to be shown. People who are incarcerated and their family members, they’re considered pretty much outcasts from our society, and if there is anything I can do to bring God’s love to them somehow, I want to do that,” says Annette, whose past service has included working as the director of the McAuley Residence, a traditional housing program for women. “My whole life has been working with families, so that was really attractive to me.”

Sister Judy and Annette both spent a short time volunteering in jail ministry and say their experiences there also motivated them to want to help.

Sister Judy also recalls meeting a mother in the waiting area and how grateful she was for the presence of jail ministry.

“That really, really touched me,” says Sister Judy. “I started thinking what it must be like: the powerlessness, the anguish, the worry, the hopes, the fears of friends and loved ones, how tormenting it must be to know that someone is in jail or prison.”

She and Annette say they hope the first Rose’s Room in Kennebec County will make a difference.

“They won’t feel so alone because there will be other people who understand what they’re going through who can truly empathize,” says Annette. 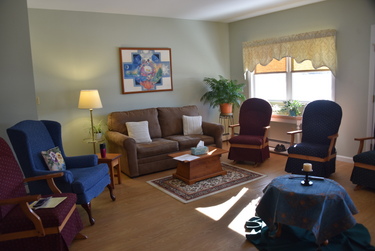 Bruce says Rose’s Room can also help families prepare for their loved ones’ return after their prison or jail terms have ended.  He says it is particularly valuable when those who used to be incarcerated are able to share with the group both the trauma of being behind bars and the difficulty of adjusting once released.

Bruce says that’s why Rose’s Room fits in so well with the work of the Maine Prisoner Re-ntry Network.

MPRN grew out of a prison ministry conference held by Catholic Charities Maine and Bruce’s own experiences in jail ministry, which he has been doing for six years.

He began volunteering after a fellow Immaculate Heart of Mary parishioner asked him to join a Kairos team at the Maine State Prison.  Bruce says rules at the time prohibited him from taking part in the retreat program because his son was incarcerated there, so he began volunteering at the Androscoggin County Jail instead.

Lee joined him two and a half years ago, and they now meet with inmates every Thursday, sharing and reflecting on the readings from Sunday Mass.

“For a lot of these guys, they were not brought up in any faith tradition whatsoever, and if they did, they strayed long ago. So, they never really felt a connection to God, to Jesus, to any real sense of hope. So, I think, really, the biggest thing that we do is we offer them kind of a lifeline. When they’ve exhausted every possible rope that they could reach out and grab a hold of, the last one that is available is God,” says Bruce.

“It’s an extremely valuable ministry,” says Lee. “You can feel the love in the room when we gather.” 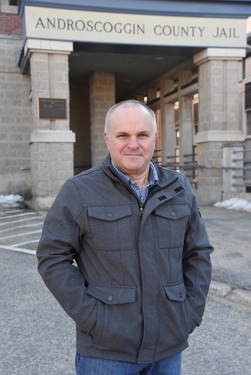 Bruce says he realized he was seeing men return to jail, leading him to wonder what more could be done to help them reenter society.

“We’re filling them with hope and love and faith, and then, what do we do after?” he asks.

It led him to attend the Catholic Charities prison ministry conference where recidivism was identified as one of the main concerns. Bruce was among those who agreed to continue meeting to seek solutions.

“Who comes is anybody who is interested in supporting folks who are getting out of prison or jail, so law enforcement, or folks on the sheriff’s staff, Department of Corrections, mental health supports, substance use supports, recovery, faith-based organizations of all faiths, and just people who have been incarcerated and who want to give back,” he says.

As they met, they discovered that there was a lack of coordination among groups trying to help former inmates. The Maine Prisoner Re-Entry Network was the result.  The network holds meetings around the state, bringing groups from an area together.

“We met at St. Monica’s Hall in Augusta for a couple months, and then, we headed up to Bangor at St. John Church. We did some meetings at St. Bernard Church in Rockland,” he says. “The aim of it is to organize communities to be a reentry ready community.”

The network also trains people to be reentry coaches or mentors, and it works to develop reentry plans for those soon to be released.

“A lot of what has been going on up to this point is relational. We’re networking,” says Bruce. “The part of the meeting that is the best is when we take a 10-minute break in the middle. You should just see everybody go from one person to the other and all these conversations taking place.”

The network has become a full-time, non-paying job for Bruce.  As a person who is in long-term recovery from alcohol and drug use, he sees it as an opportunity to give back and assist those who are struggling, whether they’re inmates trying to start over or family members who love them.

“I was always connected to my faith, but there was always something blocking me from doing what God wanted me to do. When I gave it up, everything opened up,” he says. “It was definitely a thing that was guided by God.”