Restoring a landmark of faith 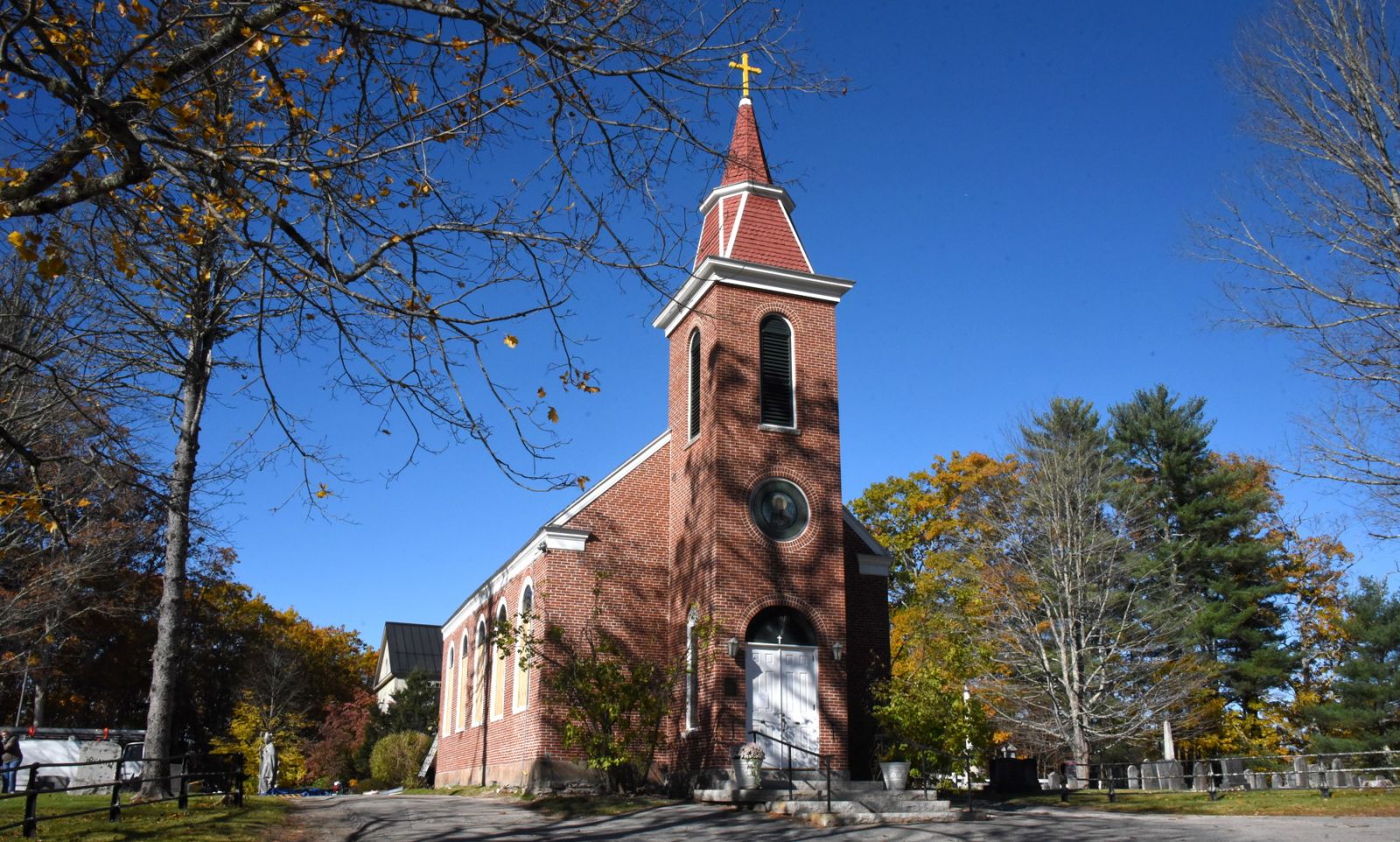 On any given day from mid-September into December, you could find one or two or more members of the St. Patrick History Museum Group outside St. Patrick Church in Newcastle. With concern, and perhaps a little curiosity, they were there to observe and document the restoration of the historic church.

“It was just amazing to see. We’ve waited so long and have been so concerned about losing our little church and the history in it,” says Mary Vallance, who is from Jefferson. “It needs to be preserved because you walk into that church, and I don’t care who you are, you come out different. It’s the most spiritual place I’ve ever encountered.”

“When you sit in there, you can just look around and be quiet. It doesn’t have to be an activity. You can just absorb everything around you,” says Nancy Finnemore, from Damariscotta. “There is nothing like it.”

Dedicated in 1808 by Father Jean-Louis de Cheverus, St. Patrick Church was built by immigrants who carried their deep faith with them from Ireland. It is the oldest surviving Catholic church in New England, and while an adjacent, larger church was dedicated in 2004, the original, 80-foot-long church is still used for daily Masses and special occasions. Designed by architect Nicholas Codd, St. Patrick Church was constructed out of bricks handmade in the neighboring town of Bristol. With its thick walls, it was built to last, but 213 years can take a toll on even the sturdiest of structures.

“We, as the historical group, started noticing that there were some things happening to the church, some were very, very obvious, some not obvious at all,” says Carrie Watson, from Boothbay Harbor. 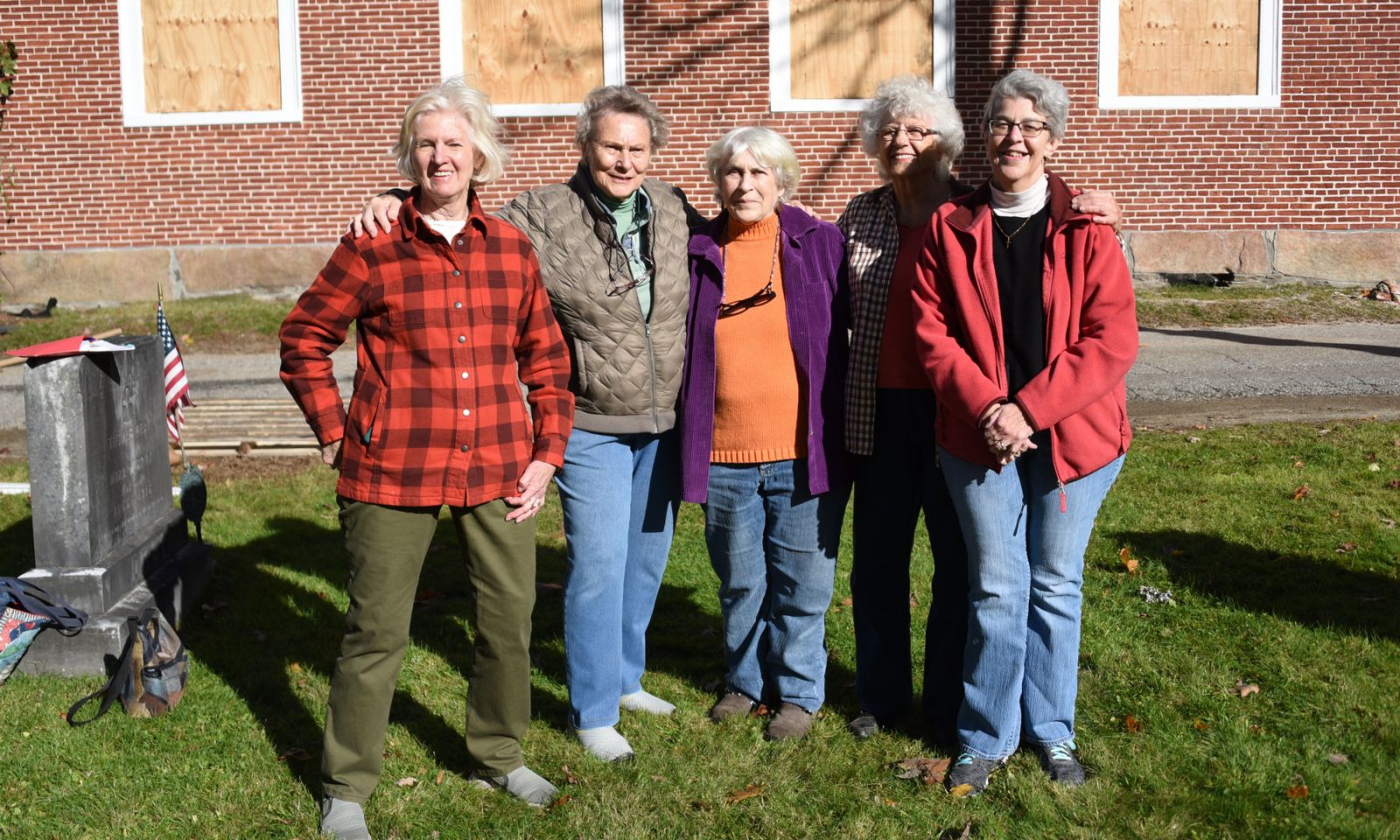 Those things included a hole in the soffit return beneath the roofline, missing shingles, loose and damaged bricks, and increasingly fragile windows.

While they knew something needed to be done, Watson says they didn’t know where to begin. That’s when Chet Hopkins, a member of the finance committee who is now deceased, approached Tom Kronenberger, a parishioner who co-owned a restoration company in Connecticut before retiring in Maine.

“We just feel like God sent him to us because he is just an amazing person,” says Watson. “He did a complete analysis of the church.”

“It was about a 60-page report about the masonry and what needed to be done and the conditions and my concerns,” says Kronenberger. “With a church that old, you have had a number of custodians over the years, and most of them tried to do their best, but they’re not restoration specialists obviously, so they end up going to the local hardware store. When a mortar joint fails, they just go and buy a bag of mortar and fill a hole. Well, in the world of restoration, that’s what keeps us in business.”

All Saints Parish, of which St. Patrick Church is a part, got an estimate from Kronenberger & Sons, now operated by Tom Kronenberger’s brother, to do the necessary work, and in 2017, fundraising began. At first, it was limited to the St. Patrick Church community because the parish was in the midst of another capital campaign, but it eventually became a parish-wide endeavor, and in July 2021, the fundraising goal of nearly $325,000 was met. That amount includes $112,000 from the St. Patrick Permanent Lay Trust, a private group established in the 1960’s to support church maintenance.

“We got the money we needed from incredibly, fabulous, wonderful parishioners, many from away, and then, we have a trust fund that was established many, many years ago by several parishioners,” says Watson. “It turned out that we hadn’t used that money for a long time. We hadn’t used all the interest that accumulated, so we were allowed to tap into that.” 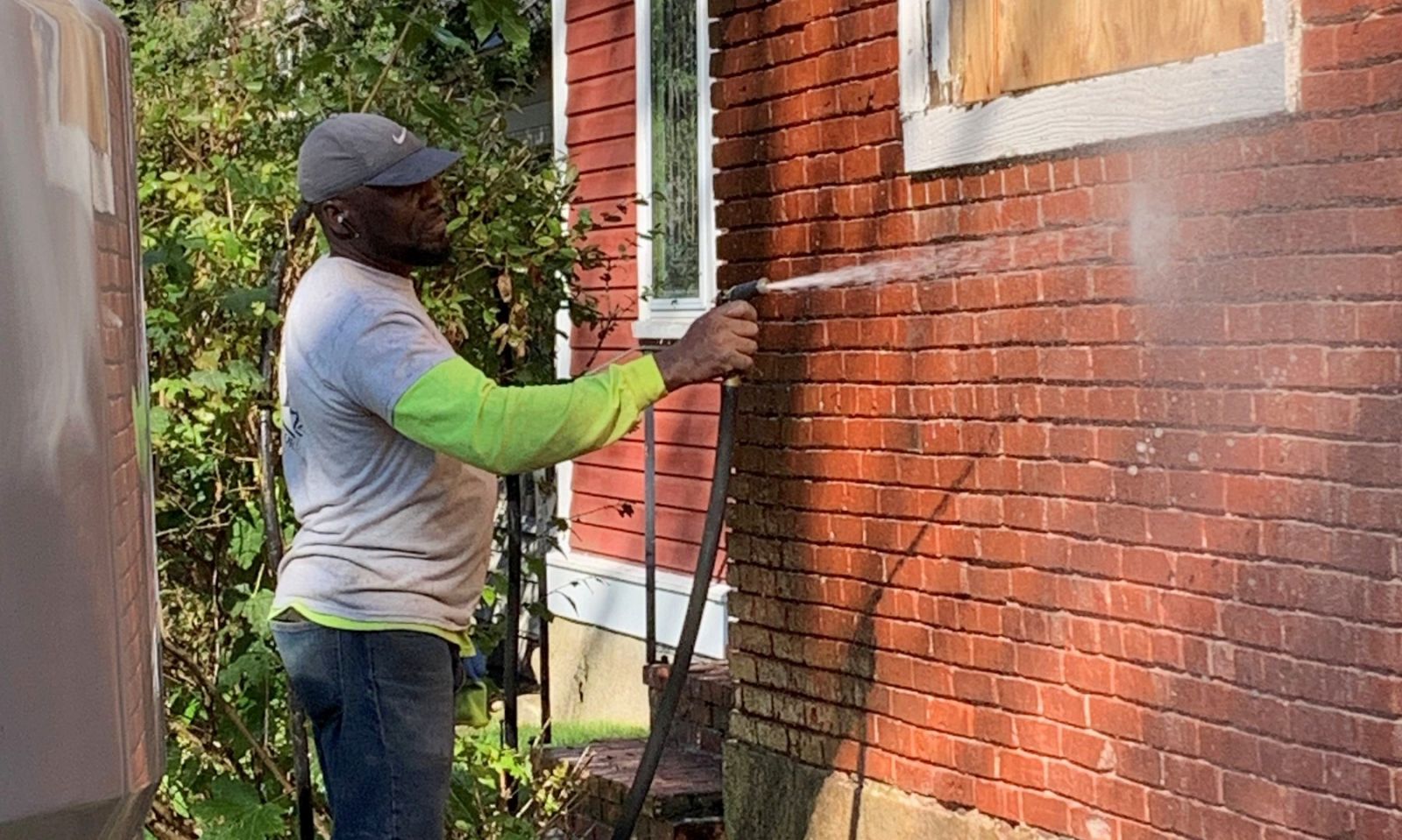 Work began on September 13 with the power washing of the building to remove dirt, soot, and moss that had accumulated over the past two centuries.

Kronenberger says replacing bricks and mortar on a historical structure begins with detective work. A sample of the original mortar was sent to a lab to determine the makeup of it, and Kronenberger took a handful of bricks to area companies to find one that could replicate them, choosing the Morin Brick Company in Auburn. While bricks are now made in standard sizes, that wasn’t the case when St. Patrick Church was built.

Along with the brickwork, restoration of the church also included a new roof, cornice and window trim repair, new paint, including on the gold cross atop the steeple, and repair of the stained-glass windows, which were carefully removed and transported to the company’s workshop.

“Within two days of that first week, they had 10 windows blanketed, put in the truck, and driven down to Connecticut where their shop is, where Kronenberger & Sons is located. I just couldn’t believe the way that they worked,” says Noelle Brosch from  Boothbay Harbor, who photographed each step of the process. 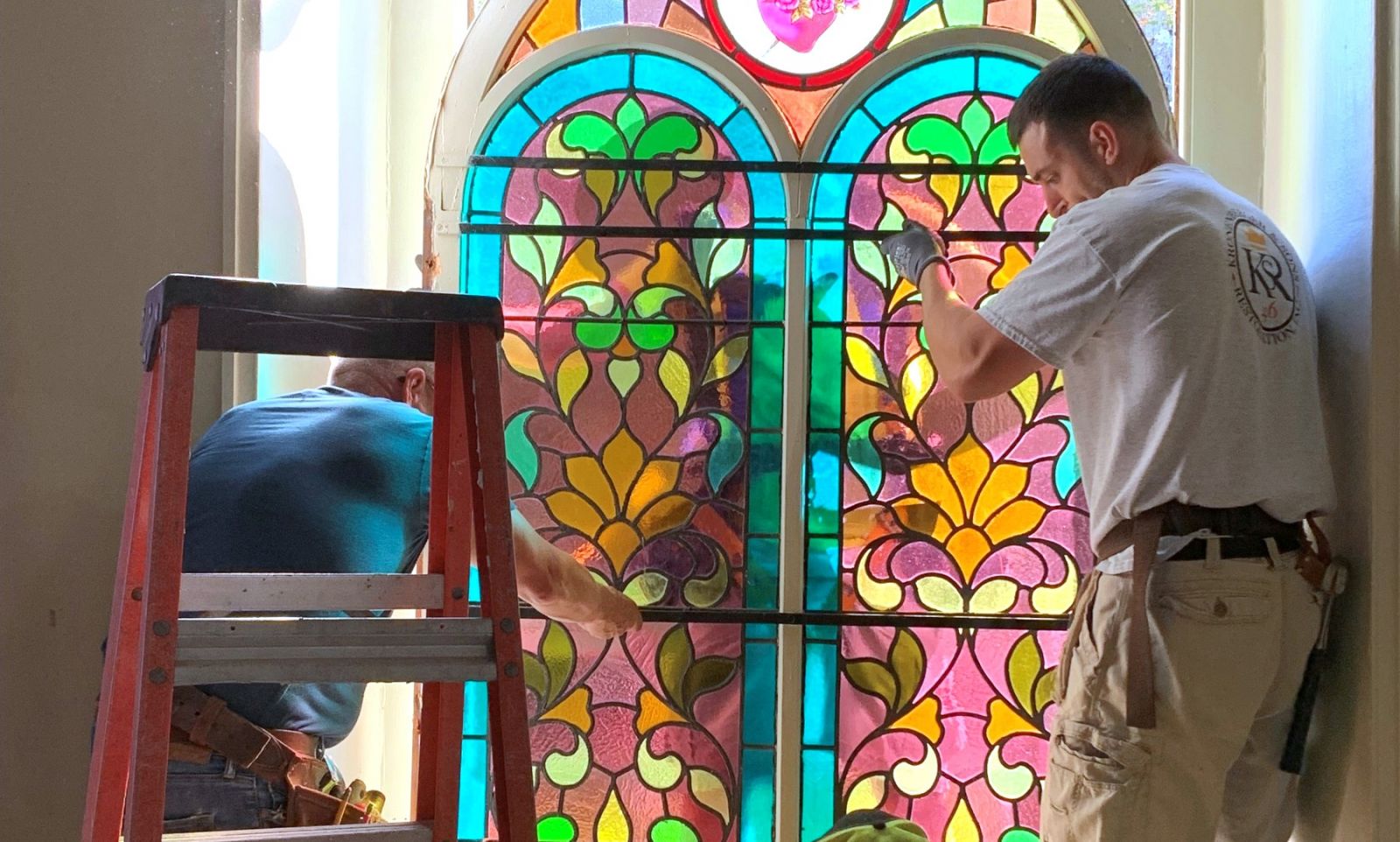 “The windows were almost in worse shape than the building in terms of needing immediate attention because they were so fragile,” adds Watson.

Of particular concern were the windows dedicated in memory of Matthew Cottrill and James Kavanaugh, the Irish immigrants who donated the land and most of the money to build the church. Watson says the Cottrill window was ready to collapse, while the Kavanaugh window had multiple cracks in it.

Ironically, some of the stained-glass windows had been damaged in an effort to protect them. At some point in the past, plexiglass had been put over the southern-facing windows which Kronenberger says created an oven effect because there was no venting. That caused sagging in the lead caming and blistering in the wood.

“All that had to be re-supported and cleaned and then re-caulked and glazed again,” he says.

Members of the St. Patrick History Museum say the restoration of the church has been a long journey, one that might not have been nearing completion if it weren’t for the support of Father Thomas Murphy, their pastor, who passed away unexpectedly just a week after the project began.

“He was an absolute inspiration to all of us,” says Watson.

Members of the St. Patrick History Museum Group say they are pleased with how the project is turning out. They say it is reassuring to know that the work being done will help St. Patrick Church remain a place of faith, hope, and love for generations to come.

“I was thinking of our forefathers in faith and how pleased they must be,” says Vallance. “We’ve waited a long time, but you also have to believe that everything is in God’s time, so this was the time, and here we are, and it looks amazing. Oh, my heart just sings.”

During the restoration process, a worker found what is believed to be a child’s rosary tucked between two bricks beneath a window. It consists of a silver chain with beads the size of small seeds. The rosary will be preserved under archival glass and be exhibited at the St. Patrick History Museum, which is located in Cheverus Hall on the church grounds. The museum is currently open on Fridays 10 a.m. to noon and by request.