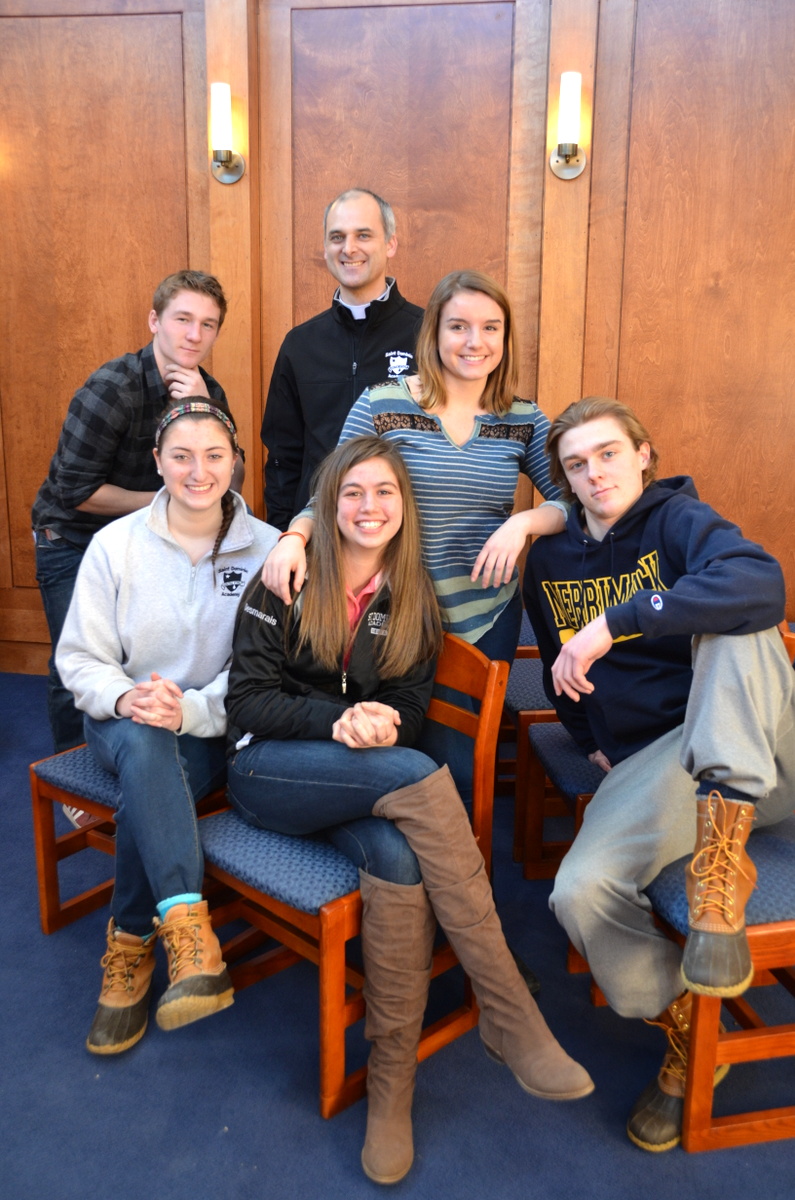 Who is considered to be the first martyr of the Church? Which pope started the Second Vatican Council?

Those were among the questions posed to teams competing in a Catholic trivia contest at Saint Dominic Academy in Auburn during Catholic Schools Week. The contest was part of an effort to bring the week to life at the school’s upper campus, which includes grades 7–12.

“Because usually, it was either never acknowledged or was just seen as a spirit week and not as Catholic Schools Week,” says Kadie Veinote, a senior.

The students behind the effort are members of the new assistant chaplain program at the school.  It was initiated by Father Seamus Griesbach, campus chaplain, who had seen the benefits of the program while helping out a friend at a high school in Bismarck, North Dakota.

“The strength of the program I had seen in Bismarck is that it really empowered students and gave them a concrete role and responsibility as ministers on campus.  So that is the goal,” he says.  “Also, I think it’s important to have a student perspective in the ministry that is happening."

Father Seamus also sees the program as a way to better get to know some students who are dedicated to their faith so he can help them grow in it.

Six students came forward to become the academy’s first team of assistant chaplains, receiving a blessing in front of their classmates at the start of the school year.  Along with Kadie, they are Bryan Bonenfant, Emily Caron, Matthew Chasse, Johanna Cullenberg, and Courtney Desmarais.  Courtney is a junior, while the rest are seniors.

“The six students who came forward are great. They’ve been just very willing to engage and to help, and they have a very strong faith,” says Father Seamus. 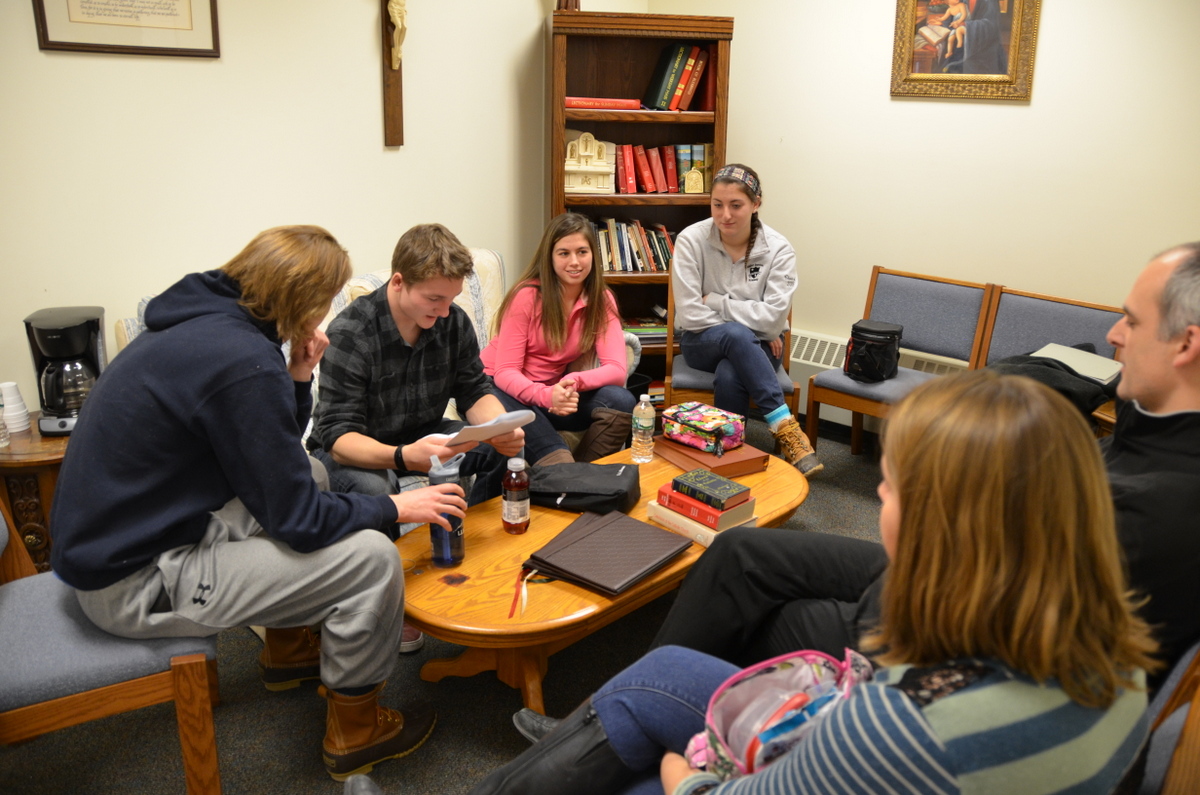 “I wanted to bring in my faith and learn more about it and help the school do the same,” says Courtney, who encouraged her friend Kadie to join.

“I do have a very strong faith, in my family and on my own, and it was, ‘What the heck?’ Why not bring some faith, if we could, into the school?” says Kadie.

“I think it strengthens our identity as a Catholic school if we have certain representatives from the school who represent the Catholic faith,” says Bryan.

The students say it can be difficult to display your faith in high school, even when it is a Catholic school like Saint Dom’s. They point to the challenging transition from middle school to high school and the desire to fit in. 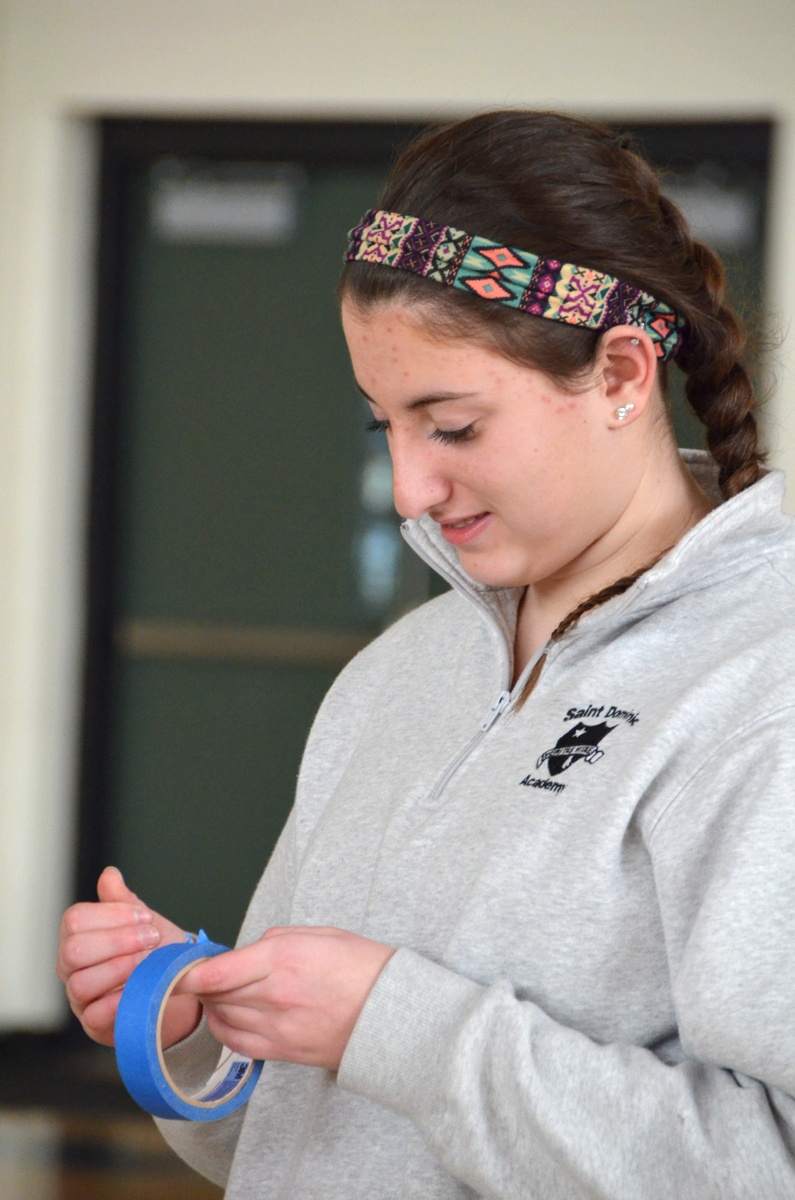 Kadie says it’s especially tough in this age of instant communication and critiques.

“They’re so nitpicky. It’s very difficult to stay with what you believe without having someone try to tear you down.”

But these students believe, through the assistant chaplain program, they can provide a different peer perspective.

“This is our school. We are a Catholic school. We need to do something,” says Kadie.

“I think it’s really great how we’ve all come together and how we want to make a difference,” says Emily. “I did not think we would jell as well as we have. I think our group has become really close, which is nice."

While the program is still taking shape, Father Seamus initially divided the ministry into three areas, service, pastoral, and worship & spirituality, with a pair of students leading each of them.

Emily, whose strong belief in community service led her to join the assistant chaplain program, is one of the co-chairs of the student service council.

“I would really like this group to get more involved in the community because that is what I’m really passionate about,” she says.  “I would love to see us get Saint Dom’s kids out there and let people know that we care about our community." 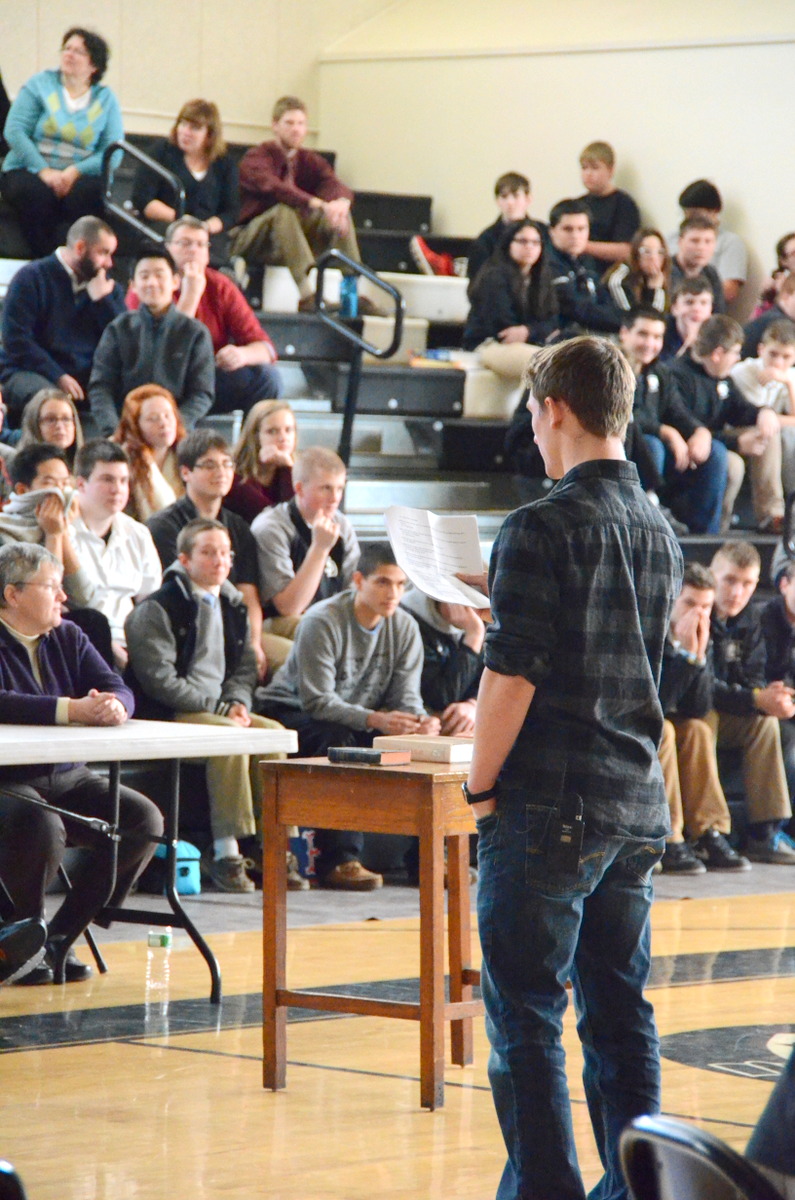 She and Bryan, her co-chair, are looking to have students cook dinners at the Saint Martin de Porres Residence for Homeless Men and Women in Lewiston, and they would like to explore the possibility of starting a composting program at the school.

As worship and spirituality coordinators, Matthew and Johanna will be working with Father Seamus to offer training to those who read at Mass. Matthew says he would also like to increase student involvement during the liturgy.

“We have church on Wednesday, and I would like to see more of the students at least singing or something,” he says. “We need to get the spirit up in regards to the Catholic faith.”

Courtney and Kadie are hoping that, as leaders of the student pastoral council, they will be able to visit classrooms and do some outreach to fellow students. “To see their perspective, see what they want out of their Catholic education, their spirituality, I guess,” explains Kadie.

“I would like to see more people get involved because I feel if more people do participate, then they won’t be as afraid to express their faith,” says Courtney. “I think we’re very blessed to have such nice facilities and such a nice chapel and to be a part of the Catholic faith, and it would be a shame to not enjoy that and express that.”

While the assistant chaplains have high aspirations, much of what they’ve accomplished in this first year of the program is to begin to lay a foundation for those who will follow them.

“It’s very much at the beginning. These things take time because it can’t be just an imposed reality,” says Father Seamus. “I can provide an initial impetus or an initial invitation, but I think, ultimately, the students will really have an important role in defining what happens, as will the teachers, and the administrators, and the parents and families of the school.”

Kadie says being one of the first assistant chaplains is both a little terrifying and really exciting. 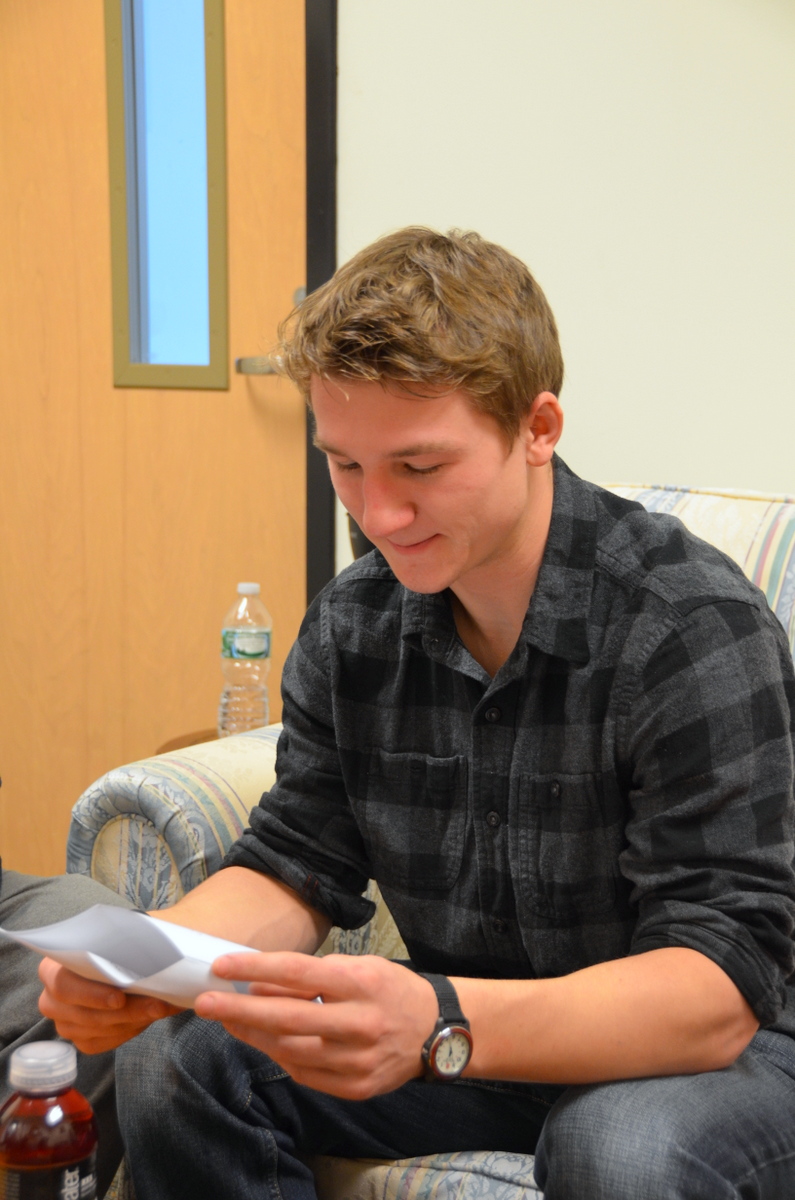 “I think we’re starting to get a feeling of what we want to do, and I’m just really excited for future assistant chaplains to take on the role and to really make this thrive,” she says.

Father Seamus is hoping to welcome the next assistant chaplains in April so that the incoming group can spend some time with the current one..

“I need them to be engaged so we’re not starting from scratch next fall,” he says.

Kadie says she hopes some of her fellow students will step forward.

“I hope people will really take this seriously and step up and that it will be able to continue and that we’ll be able to see a difference in the next couple of years,” she says. “I think it would be fantastic for the school if it were to continue."

Father Seamus says he hopes that, over time, the program will become an established part of life on campus. While it’s not close to that point yet, he says there is already a reason to view the program as a success.

“I think we forget, way too often, that Jesus promised that wherever two or more are gathered, He is in our midst. So, even just bringing these kids together for the purpose of building our faith and building our Catholic identity, even just getting together, is a victory in and of itself.”