Nurturing a Palette of Potential 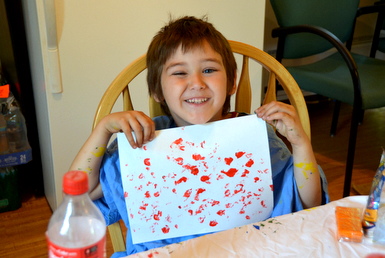 Six-year-old Kara is a budding artist.

“I love painting. I like making stuff,” she says.

Kara’s mother says her daughter has been drawn to art since she was just a toddler.

“She had paintings on our walls in every room in our place,” says Angela Viola.

It is why, when The Color Wheel, a new ministry based out of Saint Michael Parish in Augusta, offered an art class for children at the Bread of Life Ministries Homeless Shelter, Kara, who recently moved there with her mom, couldn’t wait to check it out.

“She was really excited,” says Angela. “She was over there saying, ‘Oh, the paint, the paint.’”

The Color Wheel takes a creative approach to reaching children in shelters and transitional housing, making sure some of God’s youngest masterpieces are not brushed aside.
The four women involved in the ministry plan to offer monthly art classes for the children.

Jerri Whitman, a parishioner at Saint Michael, organized the project.

“I think it builds self-esteem,” she says. “It opens a whole new avenue to them.

“It gives them an opportunity, which they wouldn’t have, to explore creativity for themselves, to expose them to it,” says Jennifer Litchfield of Boothbay Harbor, who also helped to get the project going. 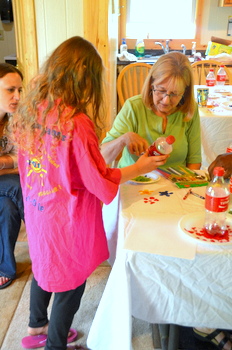 “It gets kids involved in something beyond themselves,” says Cheryl Longo of Gardiner, another of the volunteers.

The Color Wheel grew out of another ministry that Jerri started seven years ago, Hands for Humanity.  That ministry provides children with backpacks, school supplies, and shoes, as well as offering families Christmas baskets and emergency baskets containing personal care products.

Jerri say they were looking to branch out and have a program that went beyond giving.

“We wanted something that would grow with the children,” she says.

Art seemed a natural choice because Jerri and the other women involved share a passion for it. Jerri and Jennifer are both professional artists with studios. They say their love of art was nurtured when they were young, and now, they want to pass along that gift.

“When I was in the sixth grade, I had a teacher who made a tremendous impact with art on me. It’s just paying it forward,” says Jerri. “She drew a tree on the board, and I knew from the moment she draw a tree on the board that I was going to be an artist, and some of these children, if they are exposed to it, it just very well may open the door for them.” 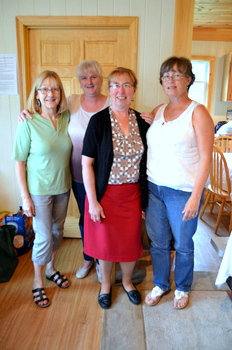 “I started drawing and painting in elementary school, and there was a teacher, also, who encouraged me at that time,’ says Jennifer. “Another of our ladies, Carol [Albert], she was doing art at a very young age, and Cheryl, too.  All four of us were introduced very young.  It makes a huge difference when it’s a passion, and if you can do that for someone else, it’s amazing.”

In June, Catholic Charities Maine presented The Color Wheel with one of six Matthew 25 awards, helping it to get off the ground.  The $2000 grant will be used to purchase art supplies including canvases, crayons, colored pencils, construction paper, glue, glitter, paint and more.

The activities will depend on the ages of those participating, but the organizers want to expose the children to a variety of mediums. During the first session, aimed primarily at preschoolers and those in early grades, the young artists dipped the bottoms of soda bottles in paint to make flowers.

“This is the first time she’s ever touched paint, but she’s done coloring, and she’s always trying to sign in and sign out here and draw little pictures,” says Lynn Caison about her 18-month-old daughter.

“This benefits her a lot,” Lynn adds. “It gets her interactive with other children. She’s not in school yet, and we don’t have transportation, so we don’t visit many people.” 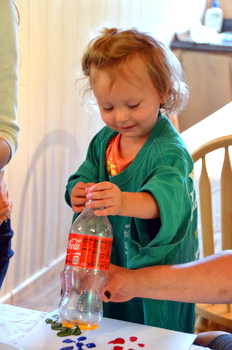 With her mom’s guiding hand, Freya was able to make a few flowers, while Kara, at age six, was smoothly combining primary colors to create brilliant bouquets and using glitter to make butterflies.

“She likes the artistic stuff,” says her mother, “anything that is positive and happy and not boring and monotonous.”

Another goal of the ministry is to get parents involved and to help them better connect with their children, something the moms and dads present for the first session did with ease.

“It’s a lot of fun,” says Thomas Mansir, who was there with his son and daughter.  Jake, age six, turned out to be a prolific artist, proudly displaying painting after painting.

There are currently seventeen adults and nine children living at The Bread of Life Ministries Homeless Shelter. Manager Matthew Finnemore says programs such as The Color Wheel are welcome.

“We’re always looking for folks who would be willing to provide some sort of programming. Painting and art can be a therapy thing for folks. We would love to open this up for adults to come in and paint,” he says.

Organizers of The Color Wheel say expanding the program to offer adult classes is a possibility.  They also envision working with senior citizens. And, if the program blossoms, they would like to increase the frequency of the children’s classes.

At the end of the first session, the children’s paintings were left to dry with the promise that they would be delivered to them for display.  The children were also given coloring books and crayons to take with them.

“It’s hundreds of kids that you’ll touch over a period of time,” says Jerri. “You don’t know who is going to be the child for whom this is going to really make a difference.”