A Mission of Mercy and Hope in Haiti 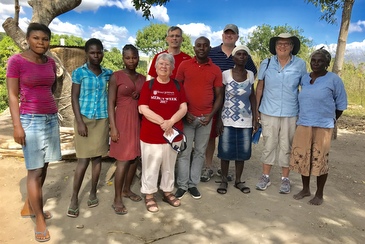 In the past 20 years, Sister Dale Jarvis, RSM, has visited Haiti 10 times, traveling there from Portland on three occasions just within the past year. Although her ministry through the Sisters of Mercy has taken her to countries around the world, she says it is the Haitian people whom she has found impossible to leave behind.

“Every time I go there, I know I need to return because somehow God placed in my heart the needs of the people of Haiti,” she says.

Those needs are great.  Sister Dale describes scenes of overwhelming poverty – people who live in poorly constructed homes, people who have no steady source of income,  people whose main concern is where they will get their next meal.

“We saw a little boy watching his brother eat, and we said, ‘Aren’t you eating today?’ And he said, ‘It’s not my day to eat. It’s tomorrow,’” says Sister Dale. “They are not able to send their children to school.”

It was images such as that which moved the Sisters of Mercy in 2011 to launch an institute-wide initiative to minister to and with the people of Haiti.  The result was the formation of Mercy Focus on Haiti (MFOH), a group that consists of Sisters of Mercy, Mercy associates, and friends who work with the religious community. Sister Dale is one of the group’s core members.

“We knew that there was no running water, no proper sanitation, no electricity. Eighty percent of Haiti’s residents live in extreme poverty, and all of this said to us, ‘We need to be there,’” says Sister Dale.

Without a long history in Haiti, Sister Dale says the Sisters of Mercy looked to partner with another religious community already at work in the island nation. They chose the Religious of Jesus and Mary, an English-speaking, international congregation of Catholic sisters who have served there for more than 20 years.

“They ran two particular programs that touched us: Maison Bon Samaritan, the house of the good Samaritan, and the Grepin Center, which focuses on agronomy, work with the environment,” says Sister Dale.

Located in Gros Morne, Maison Bon Samaritan, formerly known as “the poor house,” is home to the frail, elderly, and infirmed who have no families or whose families do not have the resources to support and care for them.  Sister Dale says when the Sisters of Mercy first got involved, they were immediately moved by the conditions they found there. 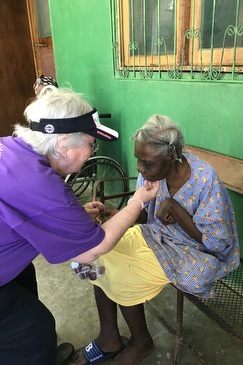 “The people who were there were sad. They were broken. They were hungry,” she says.

She recalls one man who died as a result of an infected toenail because there was no medical care available.  Mercy Focus on Haiti stepped in to help, providing staff and program support.

“Some of our sisters are doctors and nurses, so we were able to go in and evaluate the programs, and through their evaluations, we were then able to address their needs. We were able to finance a nurse and her assistant, as well as two meals a day. When we got there, they had one meal a day. Now, they have two. And we have been able to make sure they have clean water,” she says.

Students from Mercy-sponsored high schools and colleges have done their part as well, participating in immersion trips that have resulted in capital improvements, such as the construction of latrines, painting and repairs, and the creation of a new dining area.

Sister Dale says the difference it has made is striking.

“When I first went there, I was just overwhelmed with a lot of grief because of the hopelessness I saw in their faces. Now, we see the elderly women and men with light back in their eyes,” she says. “There is a nurse who bathes them daily. We see that they’re stronger because they eat twice a day. We know that they’re not as sick.”

She shares the story of one woman who had suffered a stroke and used to have to wait to have meals brought to her.  Now, with help, she can get up and walk to the dining room to eat.

Along with serving the aged, the Sisters of Mercy work with the Religious of Jesus and Mary to care for the environment through Agronomy, a program which includes gardening, forestry, and care of animals.  Agronomists supported by MFOH plant 30,000 trees each year on the hills of Gros Morne, replacing those that have cut down for fuel, cattle grazing, or profit. They have also planted community gardens and taught residents sustainable land and food practices to help lift them out of poverty.

In seeking to reach more people, MFOH decided to collaborate with another group, Fonkoze, a Haitian microfinance institution. Fonkoze’s programs include Chemen Lavi Miyò (CLM), which means a pathway to a better life. The program works with women who live in extreme poverty in some of the most remote areas of the country. 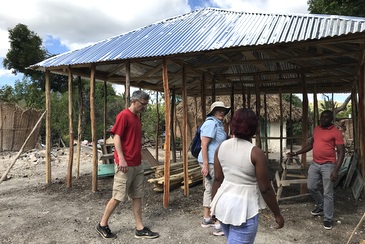 Sister Dale says the program focuses on women because they are the backbone of Haitian society and the ones who see to the needs of the children.  Those chosen for the program face persistent hunger and live on only about $1 a day.

“They don’t eat every day. They don’t send their children to school. They don’t read or write. They live in a flimsy, rain-soaked home or no home at all. They don’t have their own latrine or access to filtered water,” explains Sister Dale. “They see no way to improve their lives. They have lost all hope.”

Guided by case managers, the women go through an 18-month process that includes putting tin roofs over their heads, constructing latrines, providing clean water, and developing skills and sources of income. As they progress, they move from a place of despair to one of dignity and hope.

“They send all their children to school. They have at least two sources of income and $185 worth of productive assets. They have a plan for the future. They have the confidence to know that they can succeed. They stand tall,” says Sister Dale.

According to Fonkoze, more than 6,500 women have participated in the program since 2007, with 97% of them graduating from it.

“It trains these women so that they know how to read and write their names, have health care, have a house with a roof, but they also learn that they have the power to be independent,” says Sister Dale. “For me, the most important thing has been to see the dignity in the people as their lives are improved and they discover that they have some power to make decisions in their lives.”

Mercy Focus on Haiti has sponsored 400 women, half of whom have completed the program and half who will enter it in the spring.  Sister Dale says it is inspiring to see the results. 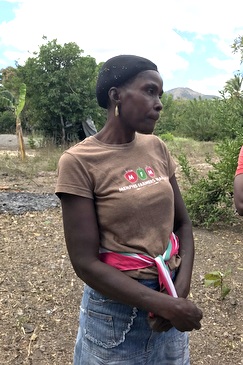 While Sisters of Mercy regularly travel to Haiti to assess the work that is being done and to provide expertise where needed, Sister Jill Weber, RSM, recently moved there to provide a continual Mercy presence in the country.

The sisters say although thousands have been served by the programs with which they’re involved, there are many more still in need, which is why they could use your help. Mercy Focus on Haiti is in the midst of a Christmas campaign aimed at raising money for a new roof at Maison Bon Samaritan, much needed because, as an elderly resident recently stated, “rainwater always drips on my bed at night.”

If you would like to help, donations can be made online at www.MercyFocusonHaiti.org or checks made out to the Sisters of Mercy may be sent to Sister Dale Jarvis, RSM, 230 Prospect Street, Portland, ME 04103.  Please note that they are for Mercy Focus on Haiti.

“For me, the most important thing has been to see the dignity in the people as their lives are improved.” – Sister Dale Jarvis, RSM