A ministry of mercy behind bars 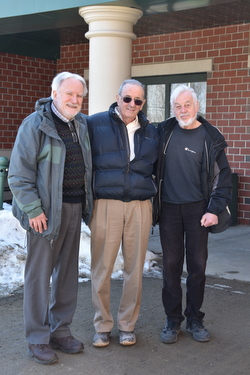 An avid hunter and fisherman, Woody Livingston moved to Maine after he retired so that he could pursue those two passions. He would soon discover, however, that as much as he enjoyed the outdoors, he had a greater love, serving the Lord through prison ministry.

“It changed my life,” Woody says.

Eleven years ago, following a Bible study group, Woody remembers standing in the parking lot of St. Anne Church in Dexter and asking himself a question.

“I said, ‘What am I doing with my life?’ It was just like that. I’m sure it was the Holy Spirit talking to me,” he says.

He noticed a bulletin announcement about prison ministry and decided to volunteer.  He has been doing it ever since.

“It is helping people, trying to bring them back to the faith. When you see them, your heart goes to them,” he says.

Woody, who is from Garland, spends two to three hours at the Mountain View Correctional Facility in Charleston every Thursday.  Sometimes, if he is leading an RCIA class, he goes twice a week. He is joined by Ray Quattrucci of Garland and Harry Wado of Williamsburg Township, who have been participating on alternate weeks the past three years.

Ray says he signed on because he didn’t want to say no to Woody’s invitation and because he believes it’s what we should be doing as Christians.  Harry decided to join the ministry at the invitation of Deacon Fred Harrigan, who had helped Harry reconnect with his faith.

“I wanted to help these people out,” says Harry. “If you get into the faith, you’re going to want to do good. You’re not going to go back to the life that you came from.”

All three men admit the thought of prison ministry was intimidating at first, but they say they found the reality of it to be far different.

“The first time going to the prison was kind of scary,” says Woody. “It was putting yourself on the spot. Do I know enough about my religion to give to these people? Is my faith strong enough?”

“I didn’t really know what to expect. I had this image of the prisoners, what they might be like, but it was just the opposite of that.  They were open and sharing, and they persevered in their faith,” says Ray.

The three men visit both the minimum and medium security units of the prison. They say their weekly ministry depends on who attends and whether any inmates are participating in RCIA in pursuit of becoming Catholic. All sessions start with praying the Apostles’ Creed, Our Father, Hail Mary, and Glory Be, and then continue with a lesson of some kind.

“We read the Bible, sometimes Matthew, or John, or the Acts of the Apostles. Sometimes, we show videos also and invite them to ask questions and things like that,” says Ray.

All sessions end with a football-style huddle in which they offer intercessory prayers. 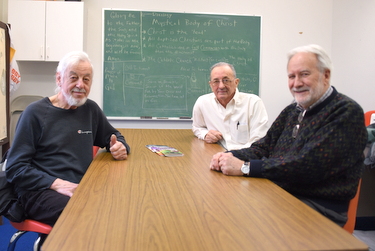 “Sometimes, it’s for the family or what they’re going to do when they get out,” says Harry. “Sometimes, it goes into a very personal kind of conversation about their lives.”

The number of inmates participating ranges from a handful to a dozen or more.  The jail ministers say numbers fluctuate because of peer pressure.

Harry, Ray, and Woody say the inmates’ knowledge of the faith varies greatly, from those who regularly read the Bible to those unable to read at all.

For inmates who wish it, the jail ministers provide materials such as “Outlines of the Catholic Church,” “The Word Among Us,” Bibles, and rosary beads.  Participants in the ministry also receive a small amount of money when they’re released to help with their reentry into society.  Woody is grateful for a 2017 Catholic Campaign for Human Development (CCHD) grant and to the parish for supporting their work

In addition to the weekly meetings, Father Emile Dubé, pastor of Our Lady of the Snows Parish in Dexter and St. Agnes Parish in Pittsfield, has visited the correctional facility once a month to offer the sacrament of reconciliation and to celebrate Mass at each of the units.

“They really like when Fr. Dubé comes,” says Harry. “Their eyes seem to light up when they know there is going to be a Mass.”

While the prison ministers say their primary goal is to bring Christ into the inmates’ lives, not to convert them to Catholicism, five men have been baptized over the past two years. They include Robert Edwards, who has regularly attended Mass since being released from prison.

“This is becoming the part of my life that I’m most strong at right now,” he says. “I just know that I need to get my life together with God.”

Robert, who says he has been incarcerated more than once, admits that in the past he has drawn closer to God while in prison, only to fall away when he is out. He says he believes this time, as a member of the Catholic Church, it will be different.  For instance, he says he has now held a job for 18 months, the longest period he can remember.

“When I go to church, I feel some kind of peace, some happiness. And the more I learn about God, the more I think about God,” he says.

Harry, Ray, and Woody say they realize some of the men will go back to old, bad habits when they’re released. 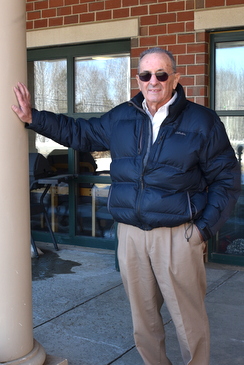 Still, they say they are not discouraged.

“It’s a very missionary mindset of someone who is not going to a foreign mission but going to a prison mission. Woody really values the time he spends with them, Harry and Ray as well. They do it because they love Jesus, and they love these men who are there. There is no judgment on their part. It’s all about being Christ for them and bringing Christ to them,” says Father Dubé.

Harry, Ray, and Woody admit it does take a commitment, one they are grateful to their wives for supporting.  They say, however, the rewards they receive are great.

“I feel that I’m gaining more than some of these prisoners are.  I’ll tell Woody, ‘Thank you so much for inviting me.’” says Harry.

“I like trying to do something to help somebody,” says Ray. “The grace of God gives me the strength to want to help someone. You really get to love these guys.”

Harry, Ray, and Woody are all advancing in age, so they hope more individuals will step forward to serve in the important ministry.  They say they’re confident that someone who tries it will come to love it.

“The ministry isn’t about us. It’s about doing the will of God,” says Woody.  “It’s for the glory of God.”