Living by the Golden Rule 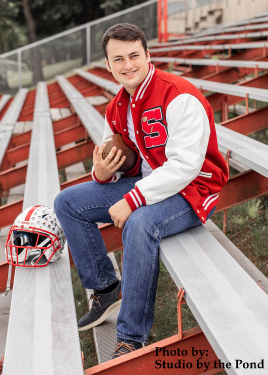 At age 19, Peter Cusack’s resume is already stacked with awards and accomplishments. An excellent student, he graduated 10th in his class from Sanford High School and was president of the National Honor Society at the school during his senior year.  Outside the classroom, he was a captain on the football team, where he played on the offensive line, and was a member of the track team, where he competed in the discus throw. He is also an Eagle Scout and a member of the Order of the Arrow, which recognizes Scouts who best exemplify and live out the Scouting oath and rules.

Peter will tell you, however, that it’s not only the things you do that matter, but, also, the way in which you do them.

“To treat others the way you want to be treated is the biggest mantra that I have,” he says. “I try to live it to the best of my ability every day.”

It is why, despite just recently graduating from high school, he already has contributed nearly 700 hours of volunteer service, dating back to his junior high years. It has included everything from helping to put in a patio and benches at the high school’s new stadium to clearing tables at Knights of Columbus haddock dinners. He has also cleaned camps to get them ready for summer visitors and volunteered as a crew leader for St. Thérèse of Lisieux Parish’s Vacation Bible School, something he remembers attending and enjoying as a child.

“It was a good way to stay connected during the summer. It’s easy, when you’re younger, to kind of zone off a little bit, so Vacation Bible School was very vital, crucial to me, just because it helped me stay connected to my faith at a young age,” he says.

Peter says his faith has always been important to him.  He credits his parents for setting that example for him and for his older sisters.

“Both of my parents were able to keep us rooted,” he says. “They really live their faith. They’re not people who just go to church on Easter and Christmas.”

He also points to the lessons he learned at St. Thomas School in Sanford, which he attended from kindergarten through sixth grade.

“Religion is kind of a necessity there and teaching values,” he says. “St. Thomas pushed us to do the best we could do.” 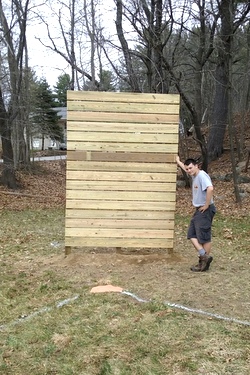 He says he so appreciated his time at St. Thomas School that when it came to choosing an Eagle Scout project, that is where he turned his attention.  Peter built a backstop and installed benches for use during the school’s annual kickball tournament.

“I thought it was a good way to give back to the school for all they have done for me. It was very rewarding to do my project there,” he says.

Peter has held numerous leadership positions in Scouting including assistant scoutmaster, assistant senior patrol leader, and lodge vice chief in his region. He was also chapter chief for the York County Order of the Arrow, the Scout equivalent of a National Honor Society.

“When you’re working with a team, with other guys, as a leader, you kind of realize you don’t want to be bossy,” he says. “I wanted to help them out. I wanted to be their friend.”

“Using my values kind of helped there just because in the locker room, it’s broader than it is in the We will have greater opportunities as one body to reach out to our community and expand and grow our ministries Church or the Boy Scout setting. You have a lot of people come from different backgrounds,” he says.  “I would find what I had in common with them and build off of that and build bonds that way.”

Peter received the Spartan Award, given to a varsity football player by the coaches for integrity, hard work, high moral character, and care and concern for others.  He also received the Maine Principals’ Award, which recognizes a high school senior's academic achievement and citizenship, the President’s Education Award for outstanding academic excellence, the American Citizenship Award, the Elks’ Male Teen of the Year Award, and the  Sanford High School Achievement Award and Cup for outstanding leadership.

Peter says knowing how difficult high school can be for some students, he understood the importance of always trying to be a welcoming presence. 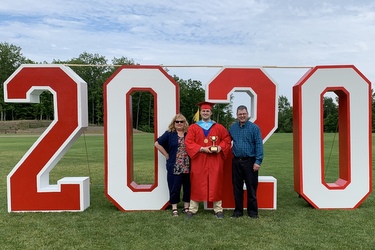 When he entered high school, Peter also became an active member of youth ministry at St. Thérèse of Lisieux Parish, seeing the need to continue to grow in his faith.

“Public school is much different than private school. They’re not going to teach you the Catholic faith in high school, so it was very vital to attend youth ministry to be with youths who share the same ideas and ideals that I have. It was important to me. There were a lot of good connections over there, and there were a lot of valuable lessons,” he says. “It’s good to go to Mass on Sundays, but you need more. You just can’t be a Sunday follower I feel.  I feel if you want to grow in your faith, you have to go above and beyond.”

That belief led Peter to participate in the Saco Discernment Group in his later years of high school, a group of young men who gathered with Msgr. René Mathieu and Father Brad Morin on Friday nights at Most Holy Trinity Church in Saco. The evenings included night prayer, fellowship, and discussions about the Church and current events.

Peter says he enjoyed the casual atmosphere, while finding the topics valuable in helping him find his place in the Church.

“That is what I really liked about it. It really helped me know where I stand and what I needed to do to keep being faithful,” he says. “It’s discerning for whatever my vocation is in life, trying to feel what God wants me to do.”

Peter will attend the University of Maine at Orono this fall, where he plans to major in computer engineering.  He is considering the Navy ROTC program on campus and says, while his level of involvement in campus ministry may depend on his schedule, he is looking forward to again seeing Father Kyle Doustou, the campus minister, whom he got to know when Father Doustou was serving at the Portland Peninsula and Island Parishes.