A life dedicated to healing and service 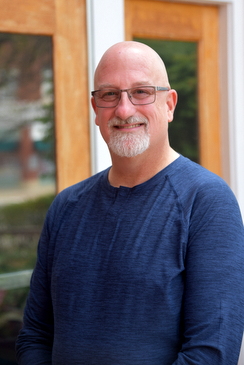 Deacon Richard Huot says it is hard to put into words what it has meant to be a permanent deacon in the Catholic Church in Maine.

“All throughout formation, deacons would tell us that this indescribable change would come over us after ordination. This has definitely happened,” he says. “There is an immediate and constant awareness of holding this awesome and undeserved office of deacon.”

Deacon Huot was among 11 men ordained to the permanent diaconate by Bishop Robert Deeley in September 2017.  Born and raised in Biddeford, he serves at Good Shepherd Parish, where he is active in the Rite of Christian Initiation of Adults (RCIA), accompanying men and woman as they journey into the Catholic faith.   He has also been involved in the parish’s Grief Share program, which helps those struggling with long-term or acute grief as the result of the loss of a loved one.

“It is a beautiful journey to be a part of,” he says.

Deacon Huot has long felt a call to help and heal.   Even when he was a child attending St. André School in Biddeford, he remembers having an interest in health care.  He says he found a book on first aid in the school library and read it within a week.         After graduating from Biddeford High School, he became an emergency medical technician (EMT), then enlisted in the U.S. Army.  He first served as a personnel action specialist, which is a human relations position, but then as a combat medic and later as a respiratory therapist. Respiratory therapists help people who are struggling to breathe and are often in life-threatening situations.

Huot continued that work after the military.  He currently works as a respiratory therapist at Wentworth-Douglass Hospital in Dover, N.H., and, prior to that, served at Massachusetts General Hospital in Boston for eight years and Mercy Hospital in Portland for 19 years.  While at Mass General, he worked in the burn intensive care unit, which also included covering the burn unit at Shriner's Children's Hospital.

“To care for the most vulnerable in your life, when life is very tenuous, those are the folks we end up taking care,” he says. “I’m a caregiver and always have been, and that’s my ministry. I only came to that conclusion, really, during my formation, realizing that I’ve been in formation far longer than when I started the diaconate process.”

Deacon Huot’s faith foundation comes from his family, who were active in the Church when he was growing up. He was an altar server for many years, but unfortunately, an experience after high school pushed him away from the faith.   Always a voracious reader, he decided to read the Bible, which led him to have many questions. However, when he sought answers from his parish priest, he says he ended up feeling discouraged, rather than encouraged.

“He was not a Vatican II guy, so his thoughts were that I absolutely should not be reading the Bible, because I wouldn’t understand what I was reading,” Deacon Huot says. 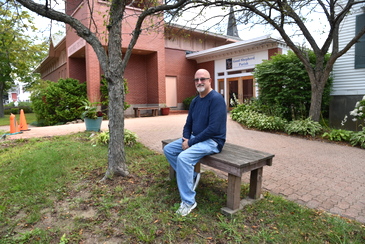 Although he would later get married in the Catholic Church and occasionally attend Mass with his wife and children, it would be 30 years before Huot truly connected with the Church again.

“For years, I had this thirst that I couldn’t quench,” he says. “I investigated several different faiths, and I could not find anything. There was always something lacking, and I couldn’t put my finger on it.”

The answer came to him while he was attending his nephew’s baptism.

"That particular baptism, in a quiet moment, I was thinking about, 'Am I ever going to find the right fit, the true faith?' And it started off this cascade," he recalls. "It just struck me strongly. The choirs of angels didn’t sing, and a beam of light didn’t hit me, but I thought, ‘Oh my goodness.’ For whatever reason, I got angry and kind of looked away, but the answer was right there in front of me. I had been in 'the' faith."

He spoke to one of his coworkers whom he knew to be a devout Catholic, and the man recommended that he meet with Father Robert Lupo, who was a parochial vicar at Good Shepherd Parish at the time.

“We struck it off very well,” Deacon Huot says.

Soon, he asked Father Lupo how he could become more involved.

“I said to him, ‘You have to put me to work. I want to do something. I just don’t want to show up on Sundays.’ I said, ‘I’ll polish pews. I’ll shovel snow. I’ll teach RCIA. It doesn’t matter. Nothing is too big or too small.’”

His desire to serve led Father Lupo to recommend that Huot speak to Monsignor Charles Murphy, the diocese’s director of the permanent diaconate at the time.  Although he was not familiar with the diaconate, Deacon Huot says once he learned about it, he knew it was his call.

“My whole life has been providing service to the folks around me,” he says. 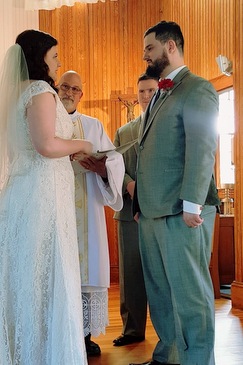 Deacon Huot says his wife, Patricia, was firmly behind the idea.

“She has totally embraced it,” he says. “She has been right beside me the whole time.”

Early on, during formation, he says he struggled with a sense of feeling not worthy of diaconal ministry but, feeling that God was calling him, he says he couldn’t say no.

“It’s a mixture of feeling extremely privileged to serve God in such an overt way but also a bit terrifying because you want to do the best you can,” he says. “I had to rely on the fact that I trust that He has chosen me for reasons that I’m not aware of.”

He says ordination was life altering.

“The change that the ordination to the diaconate has brought about does not fit into the box of responsibility. Sure, there are responsibilities both private and public that come with being a deacon, but the change goes beyond that.  There is a sense that all that is done when living a diaconal life, that everything becomes a prayer to God,” he says.

Still, he tries to take on whatever responsibilities he can, which has included presiding over many funerals outside of Mass.

He also continues to be a member of the Catholic Cross Bearers Motorcycle Ministry, involvement that predates his ordination.  The national organization seeks to provide a Catholic presence to those on the street, in prison, and in any way involved in the motorcycling world, including, at times, members of gangs.

“Those are the guys that I make myself visible to because, sometimes, that is the only connection they have to any kind of faith,” he says. “You have the guys who are looking over their shoulder and saying, ‘Hey, my mom’s not feeling well. Can you say a prayer for her?’”

“All decisions in all aspects of daily life are filtered through the responsibility of servitude. It heightens and improves my daily life and keeps me centered on being Christ in service to family, friends, coworkers, and all others,” he says. “As a deacon, you’re the bridge within your family. You’re the bridge among your friends.”