Consoling and guiding the grieving 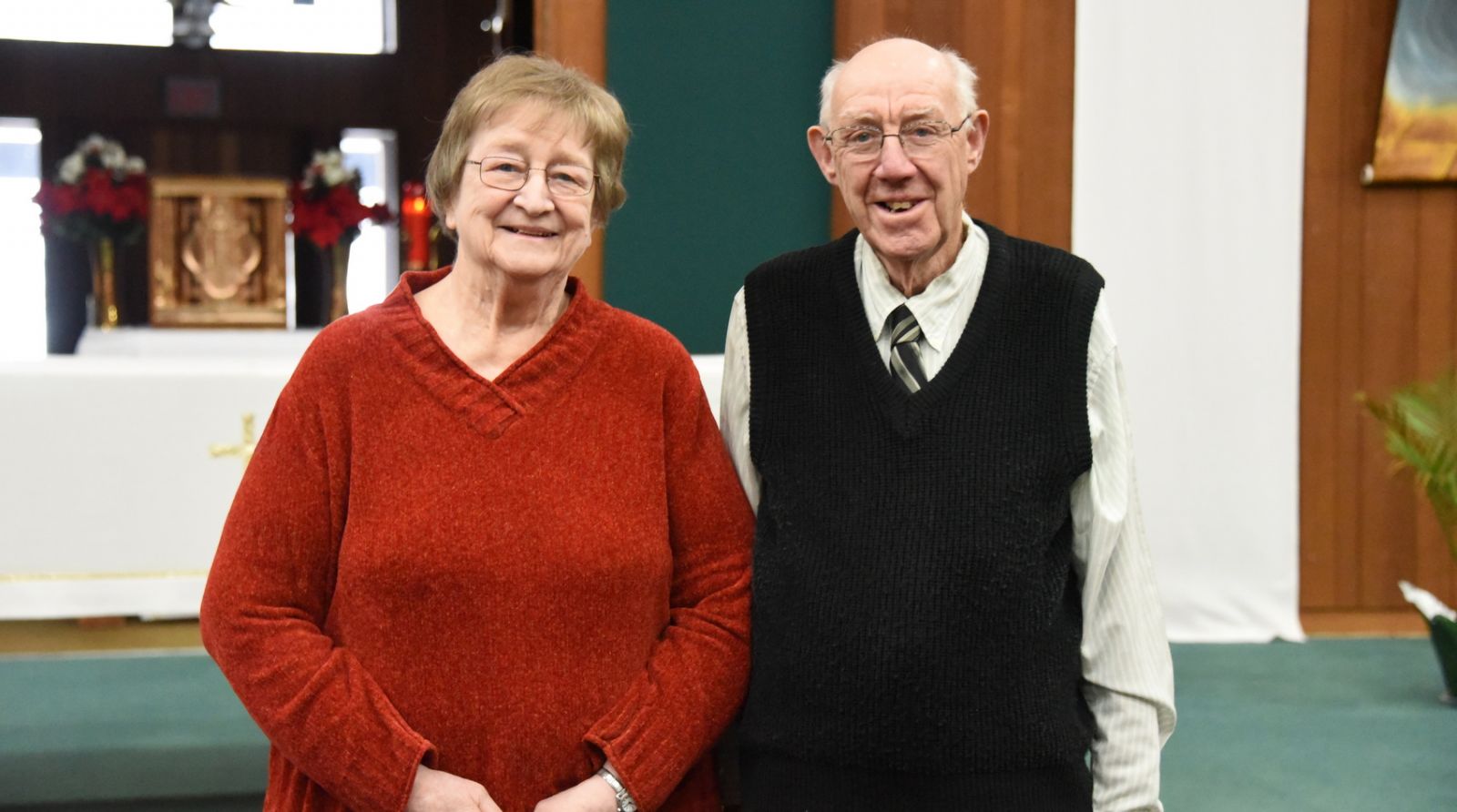 For two decades, a trio of dedicated volunteers in East Millinocket and Millinocket has been providing comfort and guidance to those who have lost a loved one.

“One of the beatitudes is blessed are the sorrowful for they shall be comforted. And this ministry, I find that it is a comfort for people,” says Francis Megno.

“People who are grieving need a lot of support, and just having someone there to help them is a wonderful relief,” says Esther Morris Willette.

Megno, Willette, and Linda Oliver serve in Christ the Divine Mercy Parish’s Lazarus Ministry, which assists people who are planning funeral Masses. Willette serves at St. Peter Church in East Millinocket, while Megno and Oliver help families at St. Martin of Tours Church in Millinocket, the larger of the parish’s two church communities. When a parishioner dies, they arrange to meet with family members to explain what happens at a Mass of Christian Burial and what choices are available to them.

“People need that type of support. They are in a grieving process, and it’s difficult for a lot of people who don’t quite understand what they have to do to provide a funeral service,” say Willette.

The ministry members help mourners pick out music, which must be liturgical if it is to be played during a Mass, as well as the readings. They bring with them Old and New Testament options from which people can choose.

Megno, Oliver, and Willette also discuss with mourners the option of having family members or friends share the readings, bring up the gifts, or possibly offer brief remarks about the deceased.

“It gives them a lot of peace, I think, to be able to participate in the funerals for their loved ones, and we help them with that,” says Willette.

It also gives those who are grieving comfort, knowing that the arrangements will be handled in a manner that honors their loved one.

“It’s a great deal of help to them to know that things will work out to their satisfaction,” she says. 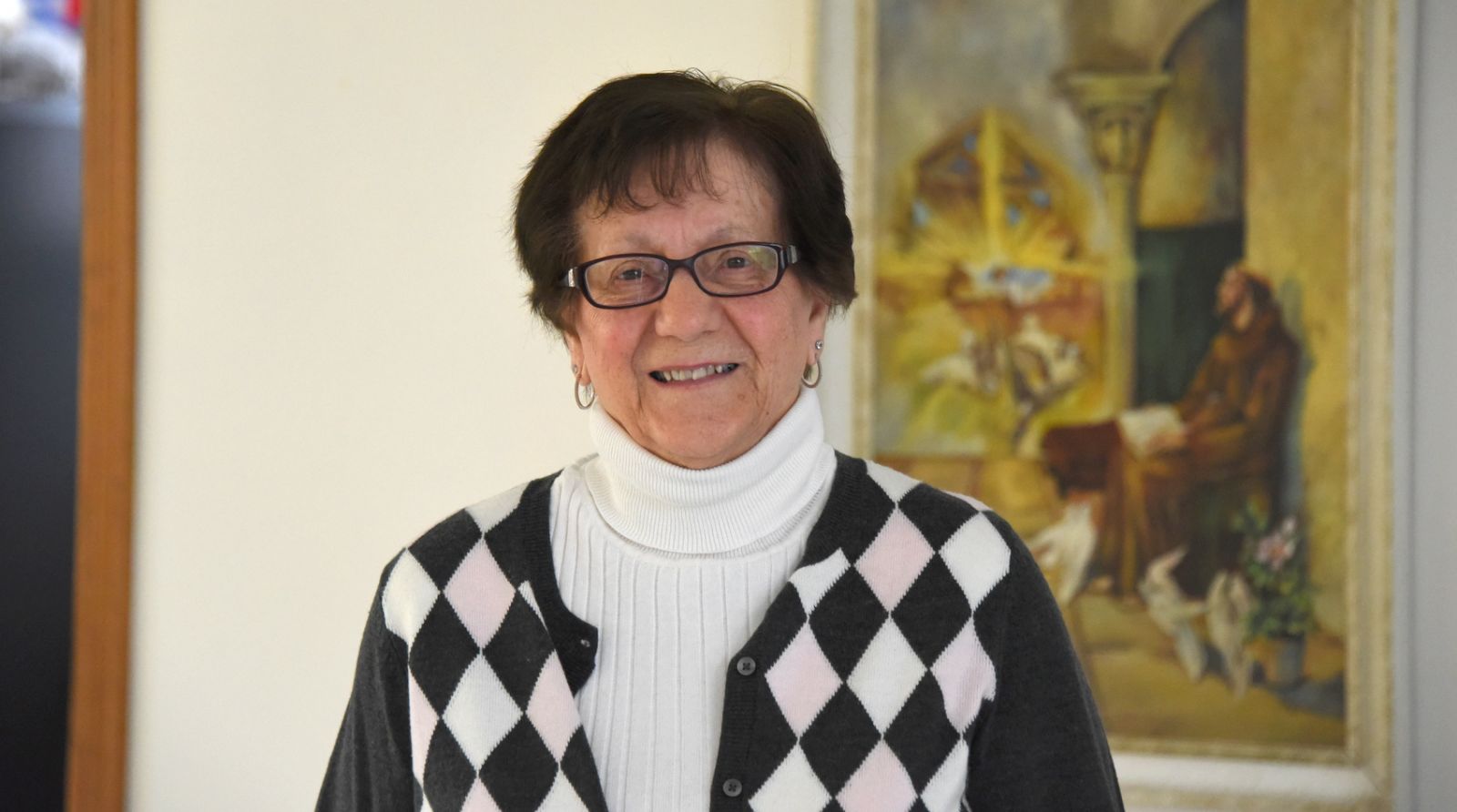 The outreach extends beyond the funeral Mass. At the one-month anniversary, Theresa Charette, another ministry member, will send out a condolence card, and on All Souls’ Day, family members are invited to attend a Mass of Remembrance.

“We light candles for the deceased, and we read the names during the Mass,” says Willette. “[Family members] come down, and they light their candle, and then, at the end of Mass, they’re invited to take their candle home, and they can burn it for their family during the month. People seem to appreciate it,” says Oliver.

The Lazarus Ministry began under the guidance of Father Richard Malo, who served as pastor from 1999 to 2006. Megno, Oliver, and Willette were among those who accepted his invitation to participate in it, and while there were once as many as 16 volunteers, only the three of them have continued on.

“We are people of hope striving to live out God’s law of love,” says Willette, quoting from the ministry’s mission statement.

Willette says the ministry seemed like a good fit for her because she worked for many years as a registered nurse and then served with St. Joseph HomeCare and Hospice.

“I guess it’s pretty much an extension of what I was doing,” she says. “I had a lot of experience in that area, and I felt comfortable doing this kind of ministry. I feel that it’s a very wonderful ministry to provide this kind of service to people.”

In addition to the Lazarus Ministry, Willette has served as a reader, an extraordinary minister of holy Communion, and as a member of the Daughters of Isabella.

Megno and Oliver are also active Church members. Oliver is a former regent of the local circle of the Daughters of the Isabella, has volunteered at the food pantry, and has served as chair of the parish’s Worship & Spirituality Commission, a position Megno has also held. Megno is a member of the Knights of Columbus, an extraordinary minister of holy Communion, and prior to the pandemic, he visited people in hospitals and nursing homes. He has also been an altar server since childhood.

Megno attributes his deep faith to his upbringing. After the death of his mother, he and his sister were raised by their grandparents, who were devout Catholics. He also attended St. Martin of Tours School in Millinocket where the Sisters of Our Lady of the Holy Rosary were his teachers and guides.

He intended to pursue the priesthood after high school, but the sudden death of his grandfather resulted in a change in plans. Rather than attend the seminary, he needed to remain home to care for his grandmother who was confined to a wheelchair. He remembers kneeling before a picture of the Lord, trying to understand.

“My eyes were closed, and before me came the image of Jesus in the garden and the words, ‘Father, let this cup pass by me but not my will but yours.’ And I thought, ‘OK, you’re going to take care of me.’ I accepted, at that moment, what had happened,” he says.

He remembers also receiving some wise counsel from Father Royal Parent, who served as pastor of St. Martin of Tours in the 1970s.

“He knew how upset I was, and he said, ‘Francis, don’t think God cheated you of anything because he didn’t.’ He said, ‘I think you are to be a lay minister for the Church.’ And Father Parent was right, because even though I didn’t become a priest, I still do ministry. God wanted me as a lay minister, and that’s what I am.”

In addition to his Church ministry, Megno was also known for playing Santa Claus. He and two friends would visit children in their homes and in the hospital.

“After we were done, we would sit on the couch and watch the lights, and we would say, ‘If we never had anything ourselves, this evening was more special than any gifts we could receive.’ We brought happiness to other people,” he says.

Oliver sees her service to the Church as a gift that helped her through a difficult time in her life. Her involvement began after the death of her husband, who passed away while still in his 50s. She says the support she received from the priests of the parish inspired her to begin serving.

“The good Lord blessed me and filled my time. I was a young widow, and I just filled it with Church things,” she says. “The last 25 years, I’ve been involved in the Church. Anything they needed or wanted, if I could do it, I would do it.”

When she started with the Lazarus Ministry, she was responsible for recording the names of the deceased and their family contacts, work she continues to do, although she now also keeps track of the readings and music chosen, finding that people sometimes came back seeking that information.

Oliver originally did not see herself as someone who would sit down with family members, but then one day, there was a request to meet with a family who had just lost their newborn. No one else was available to go.

“I had never visited with a family before, and I thought, ‘Oh gosh, I don’t know if I can do that.’ And they said, ‘Yes, you can Linda.’ So, I prayed on it, and I got ready, and I went down and visited the family. Today, I couldn’t tell you what I said to them, I was just led by the Holy Spirit.”

Oliver, Megno, and Willette say people are appreciative of the ministry. In a letter, Willette recently received, a family member wrote, “I can’t thank you enough for all you have done to help us out with Mom’s service. You were so kind and helpful from start to finish, and we thank you.”

Megno says through providing comfort to families and sharing their own strong belief in the resurrection, they sometimes can help people reconnect with their faith.

“The funeral service itself is so beautiful and so proper for their loved one that sometimes they come back to the Church after the funeral,” he says.

Megno, Oliver, and Willette hope others will recognize the gifts of the Lazarus Ministry, and similar ministries offered in other parishes, and step forward to volunteer.

“It really is a wonderful service,” says Willette. “It’s doing the Lord’s work.”